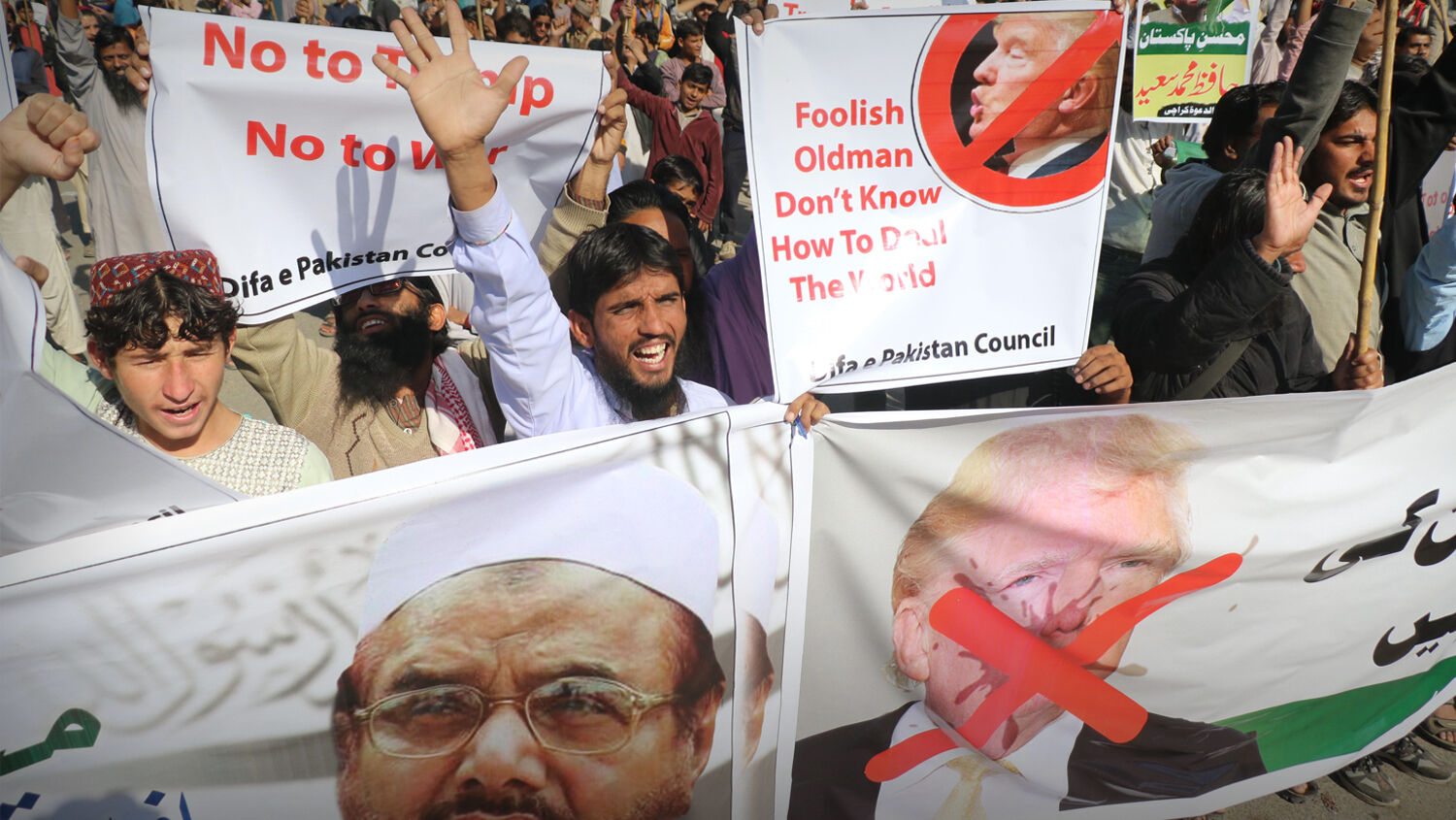 Supporters of Difa-e-Pakistan Council chant slogans during a protest against US President Donald Trump’s statement against Pakistan,
Getty Images

And toward China instead

With his first tweet of the year, United States President Donald Trump caused an uproar. Not with his domestic detractors, but with an American ally: Pakistan.

Unsurprisingly, many officials and citizens in Pakistan were furious. While numerous terrorists and terrorist organizations have safe haven in the country, Pakistanis themselves face many of the worst consequences of terrorism.

A similar flare-up occurred after a speech on August 21, when President Trump accused Pakistan of providing a “safe haven to agents of chaos, violence and terror.” Just like last time, a number of Pakistanis took to the streets to burn U.S. flags and parade with anti-Trump slogans. The U.S. ambassador was summoned to the foreign office to explain the meaning of the tweet.

Following a National Security Committee (nsc) meeting, attended by all the important Pakistani ministers involved in foreign policy, the nsc released its rebuttal: “Recent statements and articulation by the American leadership were completely incomprehensible as they contradicted facts manifestly, struck with great insensitivity at the trust between two nations built over generations, and negated the decades of sacrifices made by the Pakistani nation.”

Pres Trump quoted figure of $33billion given to PAK over last 15yrs,he can hire a US based Audit firm on our expense to verify this figure & let the world know who is lying & deceiving..

And the Pakistani government produced this graphic to illustrate the number of casualties sustained in its fight against terrorism within the country:

#Pakistan has rendered countless sacrifices in War against Terrorism and has always taken indiscriminate action against any form of extremism.
Our commitment for lasting peace is unequivocal.
#PakistanFirst pic.twitter.com/kPBgAKpzdX

Mr. Trump is right, though. After decades of funding and assisting Pakistan in the war on terror, the U.S. has seen little to no return on its investment. The war in Afghanistan still rages. Terrorism is still growing.

What began as a war of words resulted in some concrete actions. A mere 24 hours after President Trump’s tweet, the Pakistanis decided they would switch from the dollar to the yuan when trading with China. As cnbc reported, Chinese Foreign Ministry spokesman Geng Shuang backed the Pakistanis in the debate over terrorism, saying Pakistan had “‘made great efforts and sacrifices for combating terrorism’ and urged the international community to ‘fully recognize this.’”

Then came the American response. It was announced on January 3 that a planned $255 million of aid would be withheld from Pakistan. When U.S. ambassador to the United Nations Nikki Haley confirmed this, she accused Pakistan of playing “a double game for years.” “They work with us at times, and they also harbor the terrorists that attack our troops in Afghanistan,” Haley said at a news conference, according to cnn. “That game is not acceptable to this administration.”

At the end of this feud, what’s left is an America sick of Pakistani games, a Pakistan sick of American insults, and China waiting to capitalize on it all. While America withdraws its $255 million aid, China has promised $57 billion worth of investment on infrastructure and energy—all a part of its One Belt, One Road project to connect China, through trade, all the way to Europe.

China and Pakistan are already deemed “all-weather friends.” They cooperate in economics and security but shy away from addressing the sensitive areas of terrorism or human rights abuse. “The broad Chinese view of Pakistan is that of a favorite younger brother constantly landing in trouble,” writes Akbar Ahmed in Jinnah, Pakistan and Islamic Identity. “The Chinese will express their protective affection for Pakistan and in the next breath talk of the need to ensure its stability and encourage its prosperity.”

Notice what Trumpet senior editor Joel Hilliker wrote in a May 2011 article titled “Pakistan Is Snubbing America. Does It Have Another Suitor?”:

Biblical prophecy speaks of a massive war—to shake this world very soon—in which an enormous pan-Asian army will march into the Middle East. Given the geography of the region, it seems Pakistan, including this key seaport [Gwadar], could come into play as a major staging point.

Evidence also suggests the possibility that, despite its Muslim majority, Pakistan could by that point be allied with that Asian behemoth, contributing not only its gateways but even its soldiers to the effort.

It certainly appears that America’s tattered alliance with Pakistan is all but over. The U.S. is fading; power is shifting eastward. And Islamabad is entertaining offers from another, more attractive suitor.

China has worked hard to establish strong economic ties with Pakistan, gradually drawing Islamabad’s attention East. The end of U.S. military support could be the vacuum Beijing is hoping for.

This trend of America losing influence and other nations gaining it is something the Trumpet pays close attention to, because of what the Bible prophesies for the U.S. In his seminal work The United States and Britain in Prophecy, late theologian Herbert W. Armstrong foretold that the blessings the United States inherited would soon evaporate. The sea gates it possessed would be turned over to its enemies; its material wealth would eventually fade; its strength would be “spent in vain” (Leviticus 26:20). It would lose its influence over the countries it once had sway over. At the same time, other nations—such as those mentioned in biblical passages like Daniel 11—would take over in that role of dominance.

What we see happening with Pakistan is just another event that demonstrates this trend. We see this trend playing out in the Middle East, Europe and the South China Sea. The Trumpet cannot give any specific predictions about what will happen to Pakistan, but it is certainly possible that it will come under the influence of a rising China.

But this is not the end. In fact, the Bible prophesies much more for the U.S. Those prophecies are outlined in The United States and Britain in Prophecy, which is freely available to all who request it.