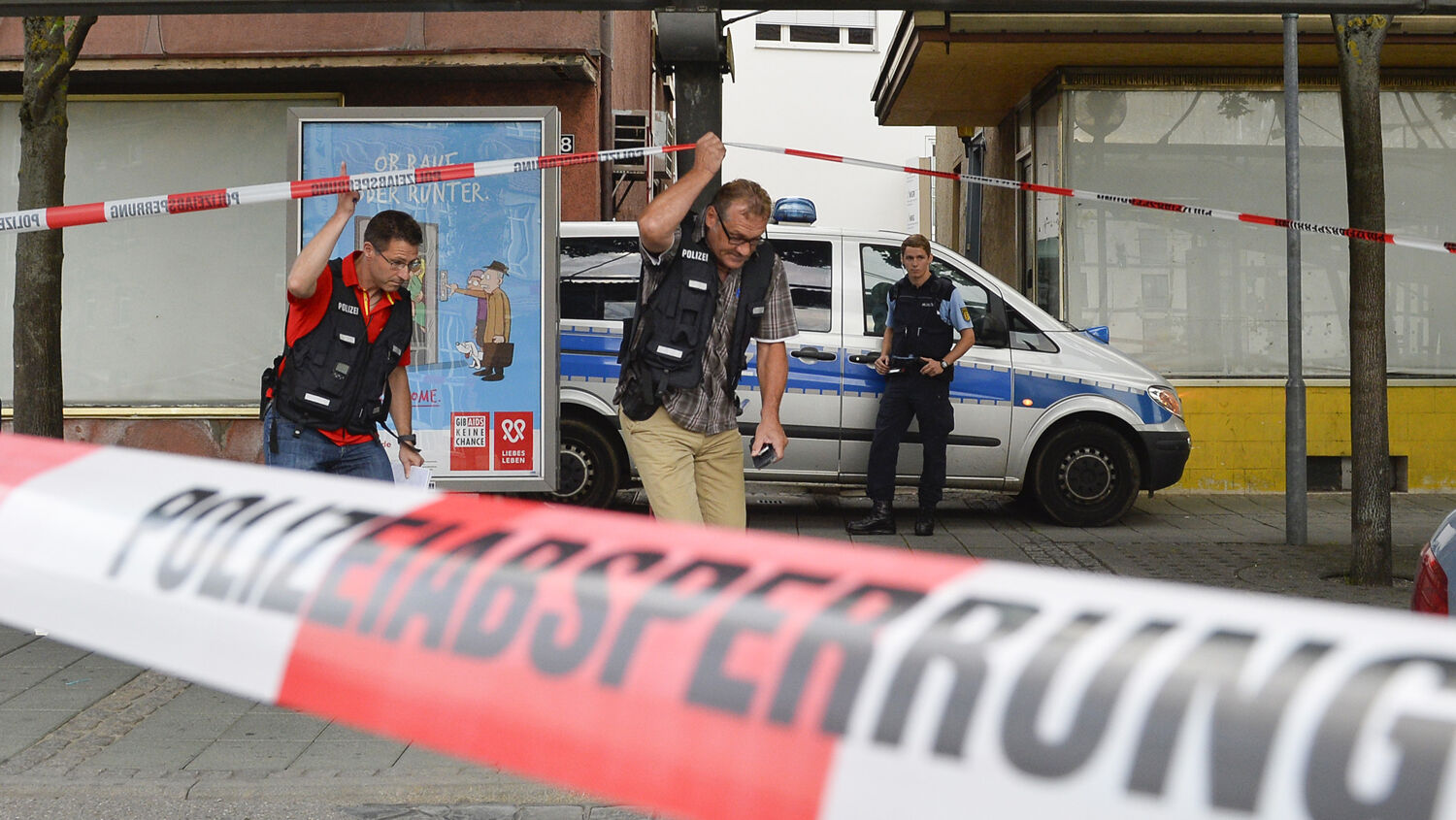 Police officers investigate the site near a fast-food restaurant in southwestern Germany on July 24, 2016, where a Syrian asylum-seeker killed a woman and injured two people with a machete.
THOMAS KIENZLE/AFP/Getty Images

The refugee crisis continues to haunt the German government. How will it respond?

A new study has linked increased crime rates in Germany with the arrival of thousands of young male refugees, Deutsche Welle reported on January 3. The study, which was commissioned by the German Family Ministry, tracked crime rates in the Lower Saxony region of Germany between 2015 and 2016. It showed a 10.4 percent increase in reported violent crimes in that region. More than 92 percent of those crimes were attributed to migrants.

Since 2015, over 1 million migrants have entered Germany, and even before the new report on crime, the German public has been deeply dissatisfied with how the German government has handled the refugee crisis.

Germans showed their dissatisfaction with Chancellor Angela Merkel’s handling of the crisis in the recent federal election. Traditional parties like Merkel’s lost thousands of votes, and far-right parties that criticized her leniency toward refugees surged at the polls. Merkel has been left struggling to form a working coalition. The refugee crisis is a big topic in the ongoing coalition discussions, and this already widely circulated study may only complicate the situation.

The study’s authors added a disclaimer to these numbers, warning that some of the increase may be because German citizens are twice as likely to report crimes committed by migrants than those committed by other German citizens. Also, many of the crimes are perpetrated by refugees against other refugees.

However, one of the authors of the study, Sören Kliem, told Deutsche Welle that there is still a “significant number of unknown cases here.” According to the study, young migrant men ages 14 to 30 are more likely to commit crimes than other demographics. They are also more likely to be victims of violent crimes. Migrant-on-migrant crimes are less likely to be reported, so the real numbers may actually be higher.

Another dimension to the statistics is that migrants who have relatively a good chance of remaining in Germany are less likely to commit crimes than those who are more likely to be deported. Reuters wrote:

Christian Pfeiffer, a criminology expert and one of the study researchers, told Deutschlandfunk radio there were huge differences between various refugee groups depending on where they came from and how high their chances were of staying and gaining legal status in Germany. …

“The situation is completely different for those who find out as soon as they arrive that they are totally undesirable here. No chance of working, of staying here,” Pfeiffer said.

The migrant crisis has consumed the European political scene for a few years, and it is having a real effect on European nations. Far-right parties are making significant gains in Germany and all over Europe as Europeans lose trust in their leaders.

Because of the migrant crisis, the political climate in Germany is ripe for the rise of a new strongman. In the March 2016 Trumpet, Richard Palmer and Brad Macdonald wrote:

What happens when the majority of Germans lose confidence and trust in mainstream leaders? Frustrated and angry, the German people, as any people would, will seek an individual, a political party, willing to heed their concerns and solve Germany’s migrant crisis. This trend is already evident in the dramatic rise of pegida and the AfD, a right-wing political party whose popularity is at all-time highs.

Many of the Germans becoming disillusioned with mainstream politics and turning to these groups are not hardcore neo-Nazis. They don’t want to persecute the migrants or see them imprisoned, beaten up or killed. They are not extremists seeking genocide. They are regular, sound-thinking, rational people, many of whom have terrific empathy for those suffering in Syria and elsewhere. These people are simply concerned about the impact millions of migrants will have on their nation, its institutions, its infrastructure, its economy, its culture and on the German people. They are concerned about Germany’s future. But Angela Merkel’s government refuses to give serious attention to these concerns and refuses to tell the truth about the impact the migrants are having and will have on the nation. …

Common sense alone tells us an explosion is coming. But the Bible specifically warns us what will be the result: a radical change in German leadership.

The book of Daniel is written specifically for the “time of the end” (Daniel 8:17; 12:4, 9). In passage after passage, it talks about a powerful leader who will shake the world. He will be the “king of the north” (Daniel 11:40), ruling over a united European power. Most likely he will be the leader of Germany, which controls the rest of the EU.

What type of man is this new leader? The Bible says that “the king shall do according to his will; and he shall exalt himself, and magnify himself above every god” (verse 36). He will be a “king of fierce countenance” (Daniel 8:23). He is assertive, aggressive and ambitious. He is a strong leader!

Crime rates are surging in Germany, and Germans are unhappy. As the government flounders to find a way to deal with the refugee crisis and form a working coalition government, watch for a strong leader to arise who will deal with such crises with a strong hand.

To learn more about this coming leader, read “Germany, Migrants, and the Big Lie” and request our free booklet A Strong German Leader Is Imminent.