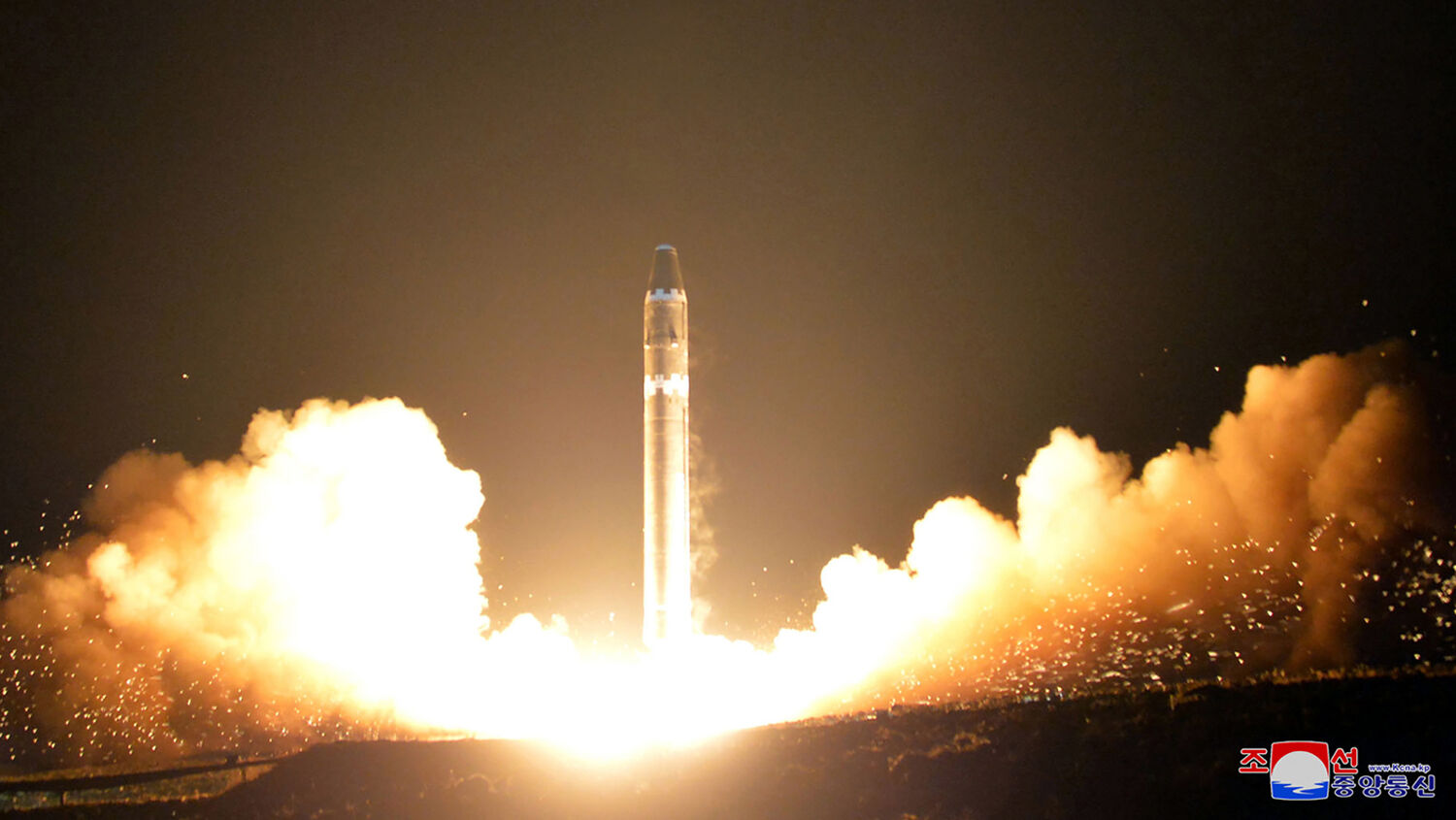 North Korea test-fires a Hwasong-15 missile, which is capable of reaching all of the United States.
KCNA VIA KNS/AFP/Getty Images

New reports suggest that North Korea may be testing anthrax-tipped ballistic missiles. Is this true—and does it matter?

North Korea may be planning to test intercontinental ballistic missiles (icbm) loaded with anthrax, Bloomberg reported on December 19. It referenced Japan’s Asahi newspaper, which reported that the rogue state is testing whether anthrax bacteria can survive the intense heat of reentering the atmosphere. If so, North Korea can add mobile biological weapons to its arsenal of threats to the world.

Some claim that the report of anthrax-tipped missiles is simply a scare tactic—a projection of power with little substance to back it up. But even if this is just another attempt by North Korea to frighten its enemies into not attacking, it highlights the rogue state’s belligerent foreign policy. It also emphasizes the new, deadly reality of the world we live in—a world where nuclear, chemical and biological weapons are a very real threat.

United States President Donald Trump’s National Security adviser believes that North Korea is the “greatest immediate threat to the U.S.” North Korea has repeatedly threatened the U.S. and its military bases with nuclear attack. Now it might be threatening an anthrax attack as well. North Korea may have anywhere between 2,500 and 5,000 tons of chemical weapons on hand, and it has the capability to produce biological weapons like anthrax and smallpox, according to South Korea.

The day before the Asahi report, the U.S. government published its National Security Strategy report, which said that North Korea is “pursuing chemical and biological weapons that could also be delivered by missile.” Popular Mechanics wrote that although the anthrax report could be significant, it should be taken with a grain of salt:

For one, the sourcing—an anonymous Japanese intelligence official—is thin. Second, transporting anthrax spores in a missile warhead is relatively easy. Anthrax pores would not have to survive 7,000-degree reentry temperatures, as warheads insulate their payloads against such extremes of heat. If all icbm warheads had to survive a 7,000-degree roasting, any payload, nuclear weapons included, would burn up during atmospheric reentry.

Third, although North Korea does have a biological weapons program, it’s been eclipsed by the country’s nuclear program. … Nuclear weapons quickly incinerate their targets with heat and blast, irradiating everything around it with lethal levels of radiation. A biological weapon such as anthrax could take weeks or even months to generate the same level of destruction.

In other words, there’s little point in deploying anthrax spores on the country’s handful of icbms if nuclear weapons are available.

That is a fair point. Depending on the size of the weapon and where it is targeted, a nuclear attack is a much more efficient way of destroying an enemy than a biological attack. However, biological warfare can also pose a “catastrophic danger” to any society, particularly if the contamination is widespread. And it would certainly be effective at spreading terror.

Popular Mechanics wrote about the reported anthrax missile tests: “If war begins, North Korea’s only real option is to attempt to shock the U.S. and its regional allies into not responding with a regime-ending campaign” (emphasis added throughout). Hence the bioweapons threat. Biological attacks are more difficult to monitor than nuclear attacks, and they can also have widespread effects if they are not detected and contained quickly. cnn wrote: “Bioweapons pose a threat that is real and tangible from any number of sources—and easily as lethal, potentially far broader and as irreversible as the outcome of any nuclear attack by a determined enemy.”

Another dimension of bioweapons is the threat of a miserable, drawn-out death. As Jeanne Guillemin wrote in her book Anthrax: The Investigation of a Deadly Outbreak: “The power of terrorism lies in its threat of potential harm. To this coercion, the threat of biological weapons adds its own powerful symbolic implications of dissolution and despair. On a collective level, a major epidemic can destroy social order.”

Biological weapons are a real threat to the world. Whether or not North Korea actually has any, several other nations around the world are strongly suspected to have biological weapons, including Russia, Syria, Iraq and Iran.

The Bible prophesied that in this end time, terribly destructive weapons would arise that would make it possible to extinguish all life on Earth. In Matthew 24:22, Jesus Christ prophesied this for our day: “And except those days should be shortened, there should no flesh be saved [alive; Moffatt translation]: but for the elect’s sake those days shall be shortened.”

In the January 2013 Trumpet, editor in chief Gerald Flurry wrote:

After World War i, Winston Churchill said, “Mankind has never been in this position before. … Without having improved appreciably in virtue or enjoying wiser guidance, it has got into its hands for the first time the tools by which it can unfailingly accomplish its own extermination.”

Since that time, we have developed chemical and biological weapons. We can exterminate ourselves many times over! The number one problem we face is human extermination! That has never been possible in history until very recent times.

We are now in exactly the position Jesus Christ prophesied about in Revelation and Matthew 24! This is the crisis at the close!

Prophecy doesn’t specifically say what North Korea’s role will be in end-time prophetic events, but it will almost certainly be part of the “kings of the east”—a united power bloc of Asian nations. The Bible doesn’t say if North Korea will back up its threats against the U.S. and send a biological or chemical weapon against it, but we do know that North Korea will not be the catalyst for the coming world war.

Trumpet executive editor Stephen Flurry and managing editor Joel Hilliker wrote on August 15: “If nothing else, the mere threat of a mentally unstable tyrant in North Korea using nuclear weapons should cause all of us to be asking some very hard questions.”

Whether or not North Korea uses its anthrax-tipped missiles, the emergence of such weapons is helping fulfill prophecies that were recorded thousands of years ago. To learn more about these prophecies, request our free booklet Nuclear Armageddon Is ‘At the Door.’