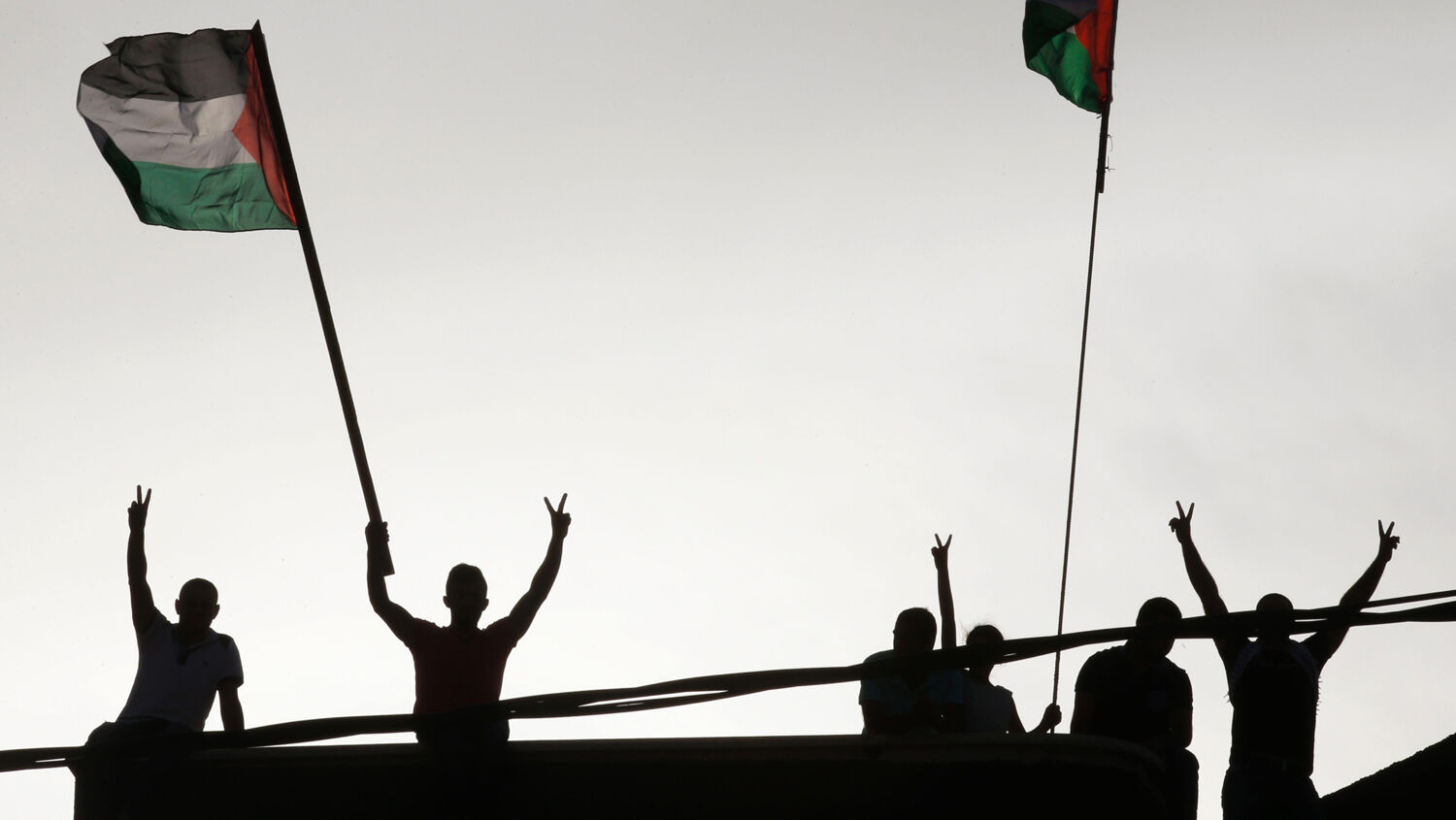 Arab Israelis hold Palestinian flags during a general strike organized to support the Palestinian call for a “day of rage.”
JACK GUEZ/AFP/Getty Image

Though refreshing, President Trump’s decision did not solve Israel’s problems.

Like many, I was delighted last week when U.S. President Donald Trump recognized Jerusalem as Israel’s capital. This world is so crazy, and upside down, and irrational, and hateful of truth, logic and reason. It was refreshing to witness a major decision that was rational and logical and right.

Mr. Trump’s announcement obviously pleased many Jews around the world. And it was a much-needed injection of confidence and hope for the people of Israel, including Benjamin Netanyahu, Israel’s intrepid prime minister.

But as refreshing as it was, this needs to be kept in perspective. Mr. Trump has not solved Israel’s problems, or even made life that much easier for Israel’s leaders. He has not created lasting peace in Jerusalem. He has not even guaranteed that Jerusalem will remain under Jewish control.

This was, ultimately, a Pyrrhic victory. You watch: Mr. Trump’s decision to recognize Jerusalem is going to be hijacked and then manipulated to create more hostility, tension and violence in Jerusalem. It is going to be used to undermine and destroy Israel in at least three distinct ways.

First, it will likely undermine America’s role as a broker for peace.

This shouldn’t be the case. The fact that America’s president has shown himself capable of telling the truth ought to inspire confidence in Washington as a broker that values truth and reason.

But this is not the way the Palestinians, the Muslim world and the liberal West see it. Instead, they view Trump’s announcement as a sign that the U.S. is not objective and therefore cannot be trusted to lead peace negotiations. Many, it seems, take the position of Saeb Erekat, a key Palestinian negotiator. “This step is prejudging, dictating, closing doors for negotiation,” he said, “and i think President Trump disqualified America from playing any role in the peace process” (emphasis added throughout).

Many Muslim leaders have stated that Mr. Trump’s decision effectively ends America’s tenure as chief negotiator. Palestinian Authority President Mahmoud Abbas stated that this “represents a declaration that the United States has withdrawn from playing the role it has played in the past decades in sponsoring the peace process.” Leaders of the United Nations and Europe, even the pope, have condemned President Trump’s decision and said that it undermines peace.

If you’re familiar with the Bible’s prophecies, you know that America being pushed aside in this way is a very significant outcome.

Second, this decision creates an opportunity for Germany and Europe to become more involved in Israel and in Israel-Arab relations.

President Trump’s decision seems to have lit a fire in European capitals. Many European leaders and journalists, including EU Foreign Policy Chief Federica Mogherini and German Foreign Minister Sigmar Gabriel, have openly called for Europe to get much more involved in the peace process.

Der Spiegel ran an editorial last Friday titled “Time for Europe to Take the Lead on Peace.” In the article, Juliane von Mittelstaedt said that Mr. Trump’s decision “disqualifies the United States as a mediator.” She also wrote that America’s ineptitude also means that “it is now up to us—the Europeans, the Germans—to come up with new ideas and new formats” for securing peace between Israel and the Palestinians.

According to von Mittelstaedt, “No other conflict should be as important to Europe as the one between the Israelis and the Palestinians.” She also said that Germany and Europe needed to develop a peace strategy in “cooperation with moderate Arab countries” in the Middle East.

Does this sound familiar?

For many years now, the Trumpet has forecast that Germany would be invited to lead Israel-Palestinian peace negotiations, and that Germany (and Europe) would develop an alliance with moderate Arab states. (We’ve also warned that this alliance would be hostile toward the Jewish state.) The prophecy about Germany entering the peace negotiations is in Hosea 5. The prophecy about an alliance of moderate Arab states with Germany is in Psalm 83.

If you aren’t familiar with the Hosea 5 prophecy, consider reading “Israel’s Deadly Wound” by Trumpet editor in chief Gerald Flurry. And this 90-second video will introduce you to the Psalm 83 prophecy. It’s important that you become familiar with these prophecies, because they are being fulfilled right now.

Finally, America’s recognition of Jerusalem as Israel’s capital will reinforce the popular narrative that the Palestinians are helpless victims and that Israel is a tyrannical apartheid state. This is not the truth. But when it comes to Israel, and so many other topics these days, the truth does not matter.

When it comes to Israel and the Palestinians, the accepted narrative—even in the West—is the one espoused by Turkey’s radical president, Recep Tayyip Erdoğan, following Mr. Trump’s announcement: “Palestine is an innocent victim,” he stated, and “Israel … is a terrorist state—yes, terrorist!”

Sa’adollah Zaeri is an Iranian journalist with connections to Iran’s Islamic Revolutionary Guard Corps. He admitted that President Trump’s decision has advantages for Iran and the Palestinians. “This situation … makes Iran’s work in forming a resistance front with a focus on defending Palestine easier,” he wrote.

Speaking from Gaza last Thursday, Hamas leader Ismail Haniyeh called for a third intifada and stated that the Palestinians should not stop fighting until Jerusalem and the West Bank have been liberated. Remarks like these, and those from Turkey’s president, explicitly promote violence. Yet who in the West will condemn Erdoğan or Hamas or Palestinian leaders for inciting violence against Israel?

The truth is, many believe such remarks are a reasonable, justifiable response to Mr. Trump’s decision. Since Thursday, there has been a massive outpouring of compassion for the Palestinian cause. In the end, the Palestinian cause will likely come through this stronger, healthier and with much more global sympathy and support.

Ultimately, expect this decision to lead to more instability, tension and violence. This gesture, like all the others, will fail. Not because the decision itself was morally wrong or inherently divisive—but because it will be hijacked and exploited by irrational, lawless, ideologically driven forces bent on sowing discord, chaos and violence.

In his Trumpet Brief last week, Mr. Gerald Flurry noted the prophecy in Zechariah 12:3, which says that Jerusalem will be a “burdensome stone,” and that all who “burden themselves with it shall be cut in pieces.” Is there a more apt description of Jerusalem? The history of this city is filled with contention, tension and conflict. Why?

This is the overarching lesson emanating from Jerusalem’s 4,000-year history. And it’s a lesson the Jews, Israel’s leaders, Donald Trump and all those who seek a role in this city have yet to learn. The only way to create lasting peace and prosperity in Jerusalem is to run the city God’s way, according to God’s laws, and in accordance with God’s will. When this finally happens, and it will, Jerusalem will fulfill its destiny and become a “city of peace.”