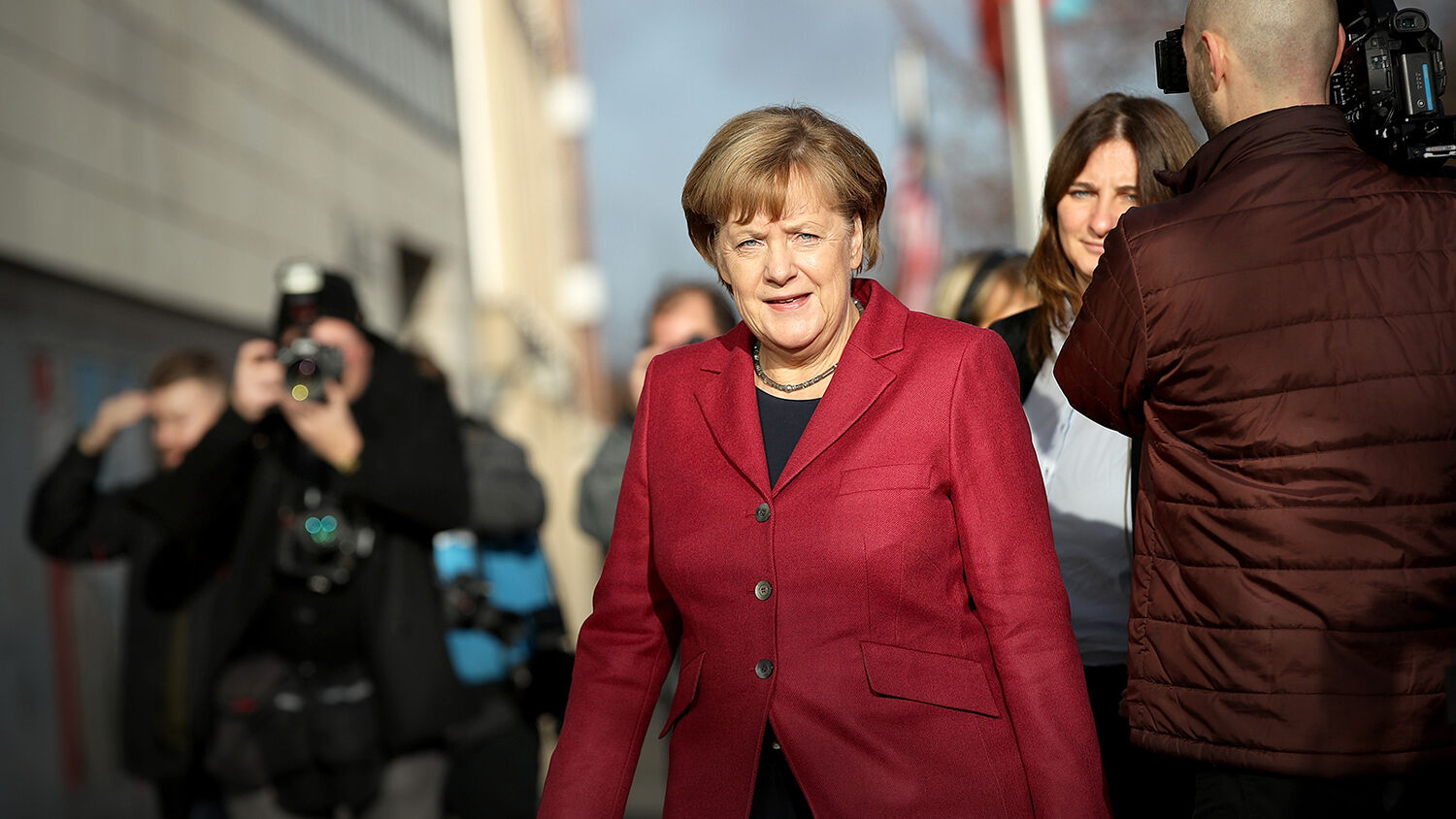 Germany has a new solution for its election problems, while major news outlets say there’s nothing to worry about. Is everything fine in Germany?

Just over a week ago, the world was worried about Germany. “Germany Facing ‘Biggest Crisis in 70 Years’ as President Orders Parties to Return to Coalition Negotiations” was a headline in the Telegraph. ”Germany Seeks Way Out of Crisis After Government Talks Collapse” proclaimed Agence France-Presse. “When a Pillar of European Stability Crumbles” was a headline for Stratfor.

Now we’re being told to go back to sleep.

“Angela Merkel’s German Coalition Crisis Greatly Exaggerated” proclaimed Deutsche Welle. It wrote that “the government keeps ticking along, and politicians across nearly the whole spectrum say the situation is hardly as dire as some are making it out to be.” This is from the same news organization that wrote “hardly anyone could have imagined that talks to form a new German government would collapse,” so its track record here is less than stellar.

But Deutsche Welle is not the only one. If Germany is in crisis “no one has told the well-heeled Christmas shoppers crowding Berlin’s stores,” wrote Philip Stephens in the Financial Times. “Wages are high, unemployment is low, and the government is awash with cash. Crisis, Germans are asking, what crisis?”

These soothing words come at the same time that a new coalition option is opening up for German Chancellor Angela Merkel. Merkel’s previous coalition partner the Social Democratic Party (spd) had said it would do no deals this time around. After Merkel’s negotiations with the Green Party and the Free Democrats collapsed on November 20, the spd changed its mind. On Sunday, leaders from Ms. Merkel’s Christian Democratic Union (cdu) and its sister party, the Christian Social Union (csu), announced they would work on forming a new grand coalition with the Social Democrats.

Is the crisis averted? Problem solved? Can Germany just keep going with a coalition very similar to the one it has had since 2013?

Not at all. Declaring the problem “over” looks only at the surface and ignores the causes of the political impasse.

Most obviously, we’re still a long way from a done deal between these parties. At the moment they’re talking about beginning exploratory negotiations toward eventually beginning actual coalition negotiations. There’s much that has to be sorted out. “It is a long path for the spd,” spd’s state premier of Lower Saxony said on Germany’s ard TV channel. He said he didn’t see any way the negotiations could finish this year. The cdu agree. “The spd needs a little more time and we should give it to them,” said Interior Minister Thomas de Maiziere. “We may see initial talks before Christmas, but formal negotiations will probably only begin in January.”

There is every chance these talks could also fail. Just because they worked last time doesn’t mean they will again. This time Angela Merkel is working with a very different spd—one that is fighting for its survival as Germany’s main left-wing party.

In the September elections, the spd received its lowest share of the vote in history—20.5 percent. If its vote share falls a few more percentage points, it basically will become a minor party, playing in the same league as Alternative für Deutschland, the Free Democrats and the Greens.

Forming another coalition with the center right could cost it those few percentage points.

Part of the reason the spd lost votes in the recent election is the perception that the party doesn’t make a difference: It simply supports Merkel’s party in a coalition. So its more left-wing voters abandoned it for farther-left parties.

This time the spd desperately needs to avoid the “vote spd, get Merkel” perception. It needs to make it obvious that it is making a real difference. It must clearly push the government left and restrain Merkel’s more right-wing ideas. It needs to be “difficult.”

Because of this, some spd leaders still don’t want to be in a coalition.

This is going to make coalition negotiations hard. If the talks fall apart, they will have only extended the amount of time Germany has to endure without a viable government.

These difficulties will continue even if they manage to form a government. Just because Ms. Merkel has governed in a coalition with the spd twice before doesn’t mean we can take it for granted that she can do so again. This post-election spd is a new beast.

All of this, though, looks at the problems on the surface. To really get to the heart of Germany’s election crisis we must go deeper.

Too few news outlets take a deeper look. Too many see the problem before Germany as simply a tricky election result. If Ms. Merkel can find exactly the right compromises to create a coalition, then the problem is solved, they believe. It won’t be easy, but the solution is some clever negotiator.

But this approach fails to ask, Why? Why this awkward result?

German voters are abandoning mainstream political parties in droves. Germany’s two main parties received 53 percent of the vote—their smallest ever combined vote share in postwar history. By contrast, throughout the 1990s, these two parties had at least 75 percent of the vote between them.

More than this, voters are abandoning these parties for fringe groups. These groups oppose not just political parties but traditional politics. They don’t just want new leaders, they question the political system itself. Their beliefs are so far outside the liberal mainstream that the mainstream parties won’t work with them.

The most famous of these fringe parties is the new Alternative für Deutschland (AfD). Opposed to migration, to Ms. Merkel and the European Union, it is the third-largest party in the German parliament. With some AfD members expressing extreme or even neo-Nazi views, the party is shunned by mainstream groups.

Every bit as extreme is the Left Party—the far left successor to East Germany’s Communist Party. All Germany’s mainstream parties have ruled out working with this party on the federal level.

These two fringe parties combined received nearly 23 percent of seats in the parliament. This is what makes forming a coalition so difficult. If you’re trying to gain a majority, but 23 percent of the seats are off the table, you have much less to work with. At this point, it’s hard for either the mainstream right or mainstream left to govern alone. They have to reach to the other side of the political system—and this is where coalitions become unstable.

This is exactly what happened in the 1930s. Democracies across Europe became stuck in this kind of a death spiral. Communist and fascist parties began picking up votes, squeezing the middle. The only possible coalitions that excluded these upstart parties were left-right coalitions. These were often dysfunctional, which drove more voters to the extremes, making coalitions even harder to form.

With such precedents, being relaxed about Germany’s current coalition talks seems foolish.

Germany’s future could get much tougher. In eastern Germany, around 40 percent voted for one of the two fringe parties. The two mainstream parties failed to receive a majority of the vote. This is an epic rejection of the whole political system. At this point, the only possible coalition that excludes the extreme parties would be one that includes every other political party.

But even this state of affairs is a symptom of deeper problems—anger and dissatisfaction in Germany with its whole political system. Unless swiftly dealt with, this anger will have an effect. It’s hard to foretell what effect exactly, but no democratic government can keep a lid on public anger forever. It either allows the public to change the character of the state, or it ends democracy to try and change the character of the public.

This is why those skilled in news analysis see the danger to Germany’s democracy. More than a year ago, George Friedman, founder of Geopolitical Futures, pointed to the growing political crisis in Germany. “If Germany weakens or destabilizes, Europe destabilizes, and it is not too extreme to say that if Europe destabilizes, the world can as well,” he wrote. “I am confident in saying I am not making too much of a small thing.” He wrote that regional election results in Berlin indicate “that the European foundation, Germany, is moving toward a major political crisis that will resonate.”

“When you consider the fact that the results of the Berlin election look like someone smashed a plate on the floor—with support for the various parties fragmenting into pieces—it is clear that something is being felt on the ground,” he wrote.

This “something” is still being felt. On Monday, Friedman addressed the growing dissatisfaction in Germany. “There is in fact a great debate in Germany over the country’s future on issues from the role of German culture to the welfare state,” he wrote. “A grand coalition brushes these matters aside, and the more it does that, the more the political system and social reality will diverge, until the earthquake inevitably arrives.”

Friedman is not the only one giving these kinds of warnings. Last week, Spiegel Online wrote that “democracy may no longer be reliable and is far too fragile.” This fragility “should be enough to focus minds in Berlin,” it wrote. “There is, after all, a lot at stake.”

Forming a new grand coalition does nothing to counteract the rising dissatisfaction. It merely makes the “earthquake” inevitable.

Exactly what this earthquake will topple is hard to tell. But the Bible tells us how Germany will look once the dust has settled.

Trumpet editor in chief Gerald Flurry outlined the changes coming to Germany in his booklet A Strong German Leader Is Imminent. Here’s how he introduces it:

Strong leaders are rising on the world scene today in several nations, including Russia, China and Iran. But what about Europe? What about Germany?

This means some major changes for Germany. In that booklet, he writes:

This is where Germany’s political crisis is leading. A look at the deeper issues in German politics, rather than a surface glance at a local shopping mall, reveals that Germany is in the midst of a transformative crisis. The Bible tells us this crisis will end with an autocratic leader running the country. For more on where this crisis is leading, read our free booklet A Strong German Leader Is Imminent.