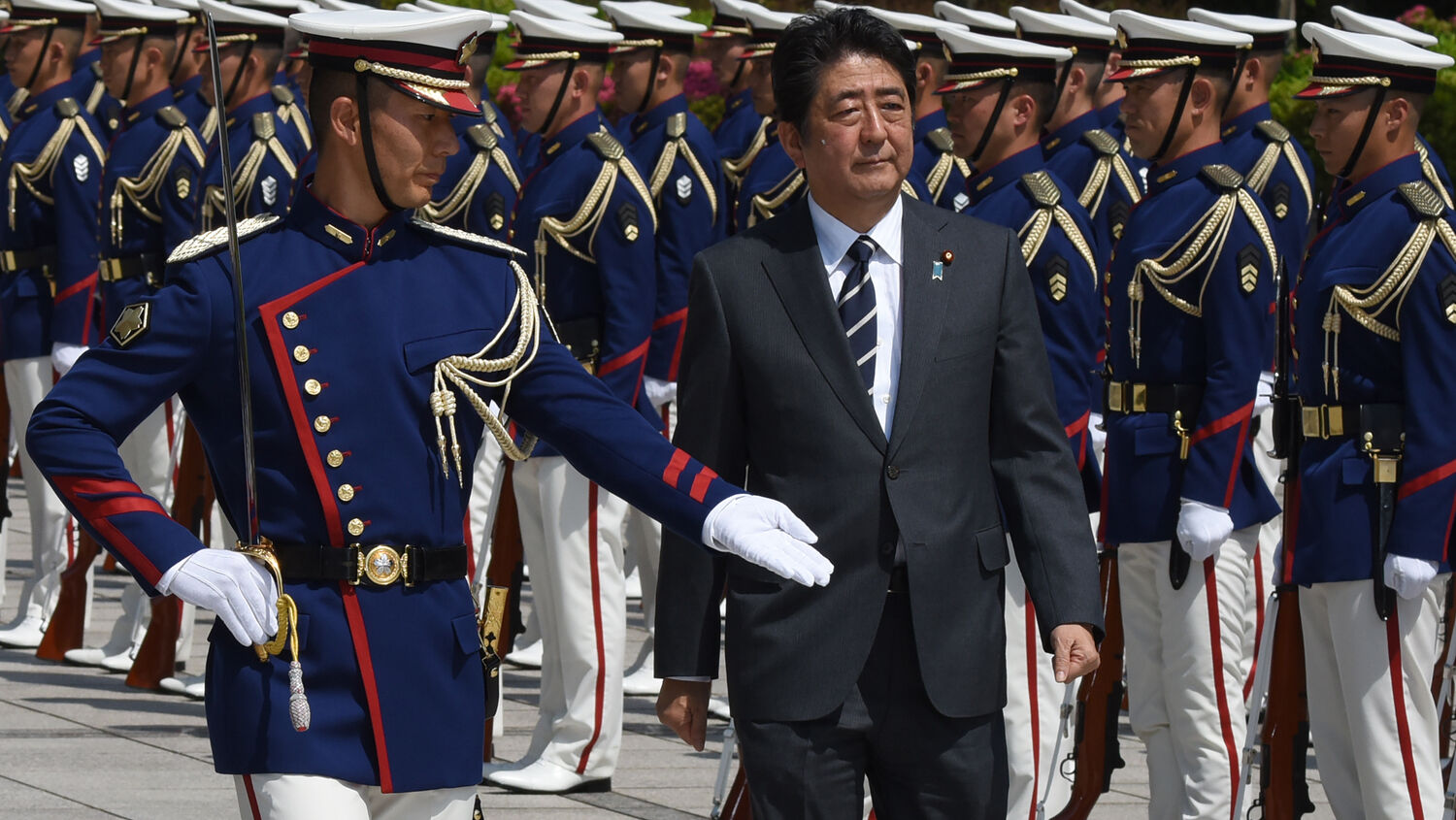 Japan’s Prime Minister Shinzo Abe ® reviews an honour guard during a ceremony to celebrate the return of Japanese soldiers from their service as international peacekeepers in South Sudan, at the Defence Ministry in Tokyo on May 30, 2017.
TORU YAMANAKA/AFP/Getty Images

‘With its elderly, shrinking population and ingrained pacifism, Japan is no threat to anyone.’

Japanese Prime Minister Shinzō Abe was reelected on October 22, in part on a platform of remilitarizing Japan. Typically Japan’s remilitarization has been pushed on a reluctant public by a more enthusiastic elite. The election result shows some of that public reluctance is fading. And if articles published in the last few days are any guide, Japan’s efforts to remilitarize will be met with no resistance in the West.

According to senior fellow at the Cato Institute, Doug Bandow, Japan shouldn’t merely be allowed to rearm, it should be encouraged to do so.

“The worsening security environment creates increasing pressure on Tokyo to do more,” he wrote in an article titled “Time to Let Japan Be a Regular Military Power,” published October 29. Both Abe and popular opinion have been shifting in this direction “but perhaps not enough.” America should stop defending Japan, he argued. Japan and China “don’t appear to be at the brink of war.”

“Anything is possible,” he acknowledged, “but there’s still no reason why wealthy Japan should not do the deterring.”

America should even push Japan to develop its own nuclear weapons. Bandow continued:

Tokyo should take over its own defense. But shifting responsibility for Japan’s conventional defense is not enough. The United States should reconsider its nuclear umbrella as well. In defending Japan, Washington already is risking Los Angeles to protect Tokyo. If North Korea acquires the ability to hit the U.S. homeland, Uncle Sam will be doing the same again, only against a potentially more reckless power.

Obviously, Washington expects the threat of retaliation to deter attack. But if deterrence fails, as it often has in history, then war could invade the American homeland. And there’s no good reason to take that risk given Japan’s capability to arm itself. The Japanese people might be reluctant to go nuclear, but they can underinvest in defense with little ill consequence only so long as Washington is willing to impose the cost on the American people. If the Japanese realized they had to do more or live (and potentially die) with the consequences, they might act differently.

Jeffrey Hornung, political scientist at rand Corporation, wrote a similar article just days before. On October 23, Hornung wrote on Defense One that “a serious national debate is long overdue about what Japan needs to ensure its survival.”

He argued that Japan should acquire the ability to launch long-range missile strikes. He noted:

It would be politically difficult for Abe to acquire strike capabilities. He would be criticized for trampling on Japan’s pacifist Constitution. The domestic opposition would likely argue that long-range missiles are “war potential” prohibited by the Constitution. And countries such as China would probably complain that Abe is remilitarizing Japan.

But the government has a responsibility to protect the lives and property of its citizens. Facing a country like North Korea, which has threatened Japan’s very existence, leaders must do everything within their grasp to protect the country. If the existing bmd system has gaps, any means for Japan to strengthen its deterrence capabilities should be welcomed. The heightened threats from North Korea could be viewed as a call for new action.

For most of the past seven decades, Japanese political leaders could only improve security policies as fast as the pacifist public allowed. This worked during the Cold War when the technology of the Soviet Union did not change rapidly. After that era, Japan’s security policies continued to adapt to meet new challenges, albeit slowly. But North Korea’s swiftly advancing military capabilities have drastically changed the threat environment. Japan no longer has the luxury to be complacent about its security threats. It should consider making strike capabilities a top priority.

Britain’s Economist magazine is also joining the calls, with an editorial published October 28 titled “Time for Japan’s Prime Minister to Change the Constitution.” They noted that Japan has essentially been militarized for years:

For more than seven decades Japan has flagrantly violated its own Constitution by maintaining land, sea and air forces. Its military budget is the eighth-largest in the world. Its 300,000 troops are superbly equipped. Successive governments have clung to the fiction that this is somehow constitutional by using the label of “self-defense forces.” As legal camouflage goes, this is like trying to hide a tank by sticking a Post-it note on it.

They at least called for Japan’s leader to stop his more worrying activities:

If he wants constitutional change and to reduce opposition abroad, he should stop visiting the Yasukuni shrine, where war criminals are worshiped; denounce the atrocities of the past; and distance himself from his grandfather, a postwar prime minister and colonial administrator who forced thousands of Chinese to work as slaves. For Japan truly to become a normal power, it needs to come to terms with its history.

However, they still believe that Japan should “be doing its bit to keep the world safer.”

“With its elderly, shrinking population and ingrained pacifism, Japan is no threat to anyone,” they wrote.

Japanese pundits are making similar calls. Masamichi Hanabusa and Sadaaki Numata are former Japanese ambassadors and members of the English-Speaking Union of Japan. In the Japan Times, they warned that the rise of North Korea means that “Japan cannot afford to slumber in pseudo peace while leaving this issue for other nations to resolve.”

“Japan must quickly start efforts to build defense capabilities that would enable it to launch counterattacks on the origins of attacks at much longer ranges than is possible today,” they noted, while calling for Japan to remain clear of nuclear weapons.

It’s completely understandable that Japan wants nuclear weapons in the face an erratic and dangerous North Korea and a rising China. But there are a number of reasons to question the Economist’sconfident assertion that “Japan is no threat to anyone.” As Jeremiah Jacques wrote:

Japan is notorious for failing to express much remorse for its wartime savagery. Japan has also revised history in many cases to downplay its crimes.

The people of Japan embody many exceptionally noble and admirable traits. Their cultural and technological contributions have enriched the human experience for millions around the globe. But as a result of historic revisionism, a dangerous number of modern Japanese view their nation’s wartime atrocities with pride.

This is a foreboding and worrisome trend.

The Bible also warns that Japan’s history with militarism is not quite over. Jacques continued:

These prophecies were recorded in the Holy Bible thousands of years ago. And today we can see the groundwork being laid for their fulfillment! God’s mighty plan is being carried out!

For more on this trend and where it is leading, read his article “Why the Trumpet Watches Japan’s March Toward Militarism.”