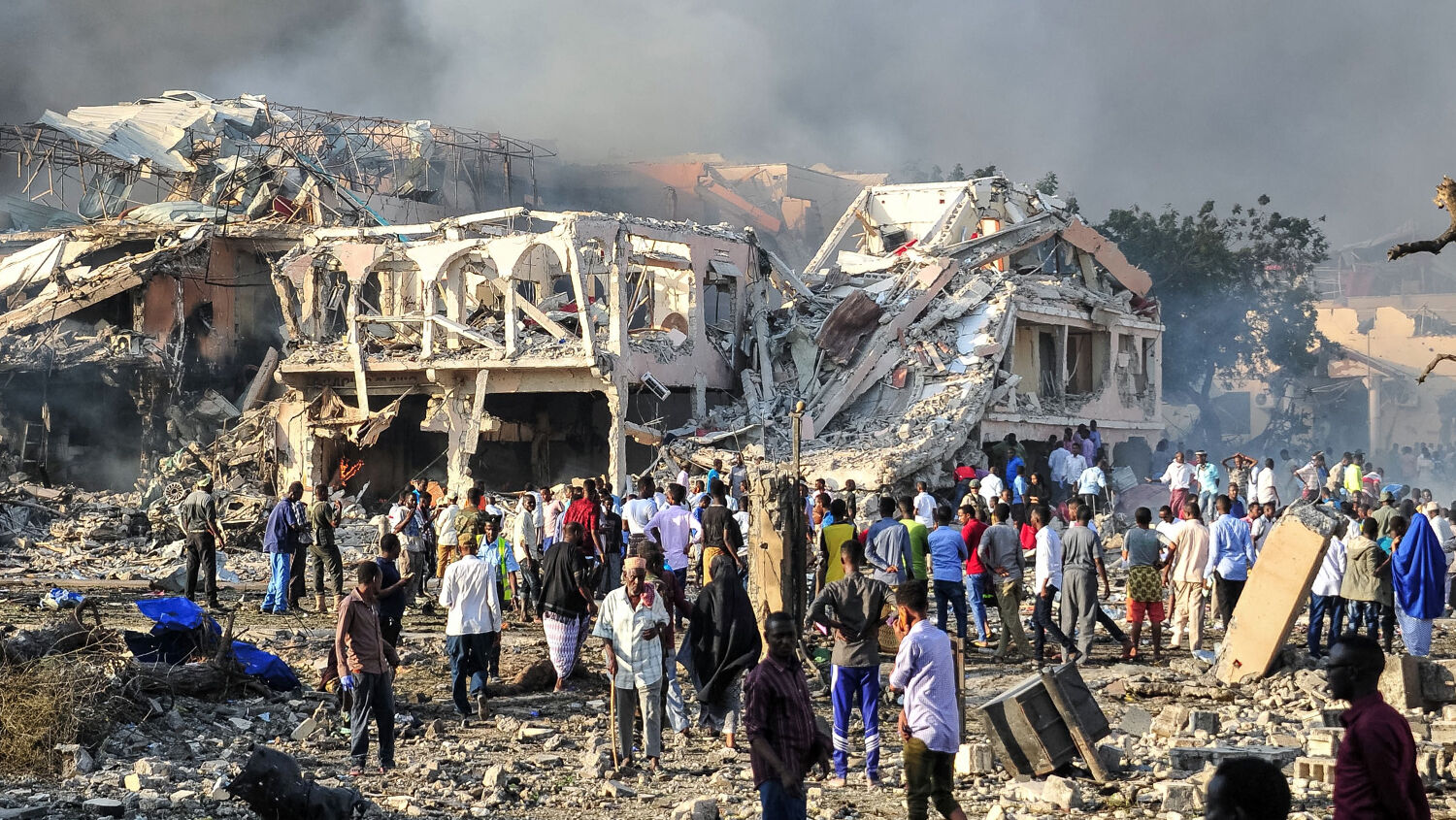 Men and Somalian soldiers arrive on the site to rescue victims of the explosion of a truck bomb in the centre of Mogadishu, on October 14, 2017.
MOHAMED ABDIWAHAB/AFP/Getty Images

And the West barely notices. We shouldn’t let it go ignored.

In the northern parts of Africa, that inhabited continent most abandoned by our Western newsreels, there are horrific bombings—African 9/11s, so to speak—occurring at a frequency that ought to stun.

They haven’t, of course, considering those events skitter onto the front page for a brief while before being rapidly displaced by stories of knee-bowings or presidential phone calls. The destruction of city streets and loved ones, communities and illusions of security, all in the name of jihad, bring no such fleeting emotions.

Take, for example, the latest bombing of Mogadishu, the capital city on the east coast of Somalia. Last Saturday, October 14, a truck masquerading as a transporter of agricultural products drove into the city, stopped outside what used to be the Safari Hotel, and triggered the approximately 350 kilograms of explosives it was hiding. Surrounding the Safari Hotel—which, if you check is now registered as “Closed”—are government offices, restaurants and kiosks. The explosion ignited a nearby fuel tanker.

Shocked by attacks in #Mogadishu, perpetrators’ brutality is unacceptable & must be condemned. Sincerest condolences to all affected.. pic.twitter.com/GsRfsdVxzi

After the blast, the government decided to bury at least 160 of the dead, which were charred beyond recognition. Somali President Mohammed Abdullahi Mohammed donated some of his own blood to hospital banks before calling on his citizens to do the same.

As the dust settled, the street was a picture of brown and gray destruction, highlighted only by the colorful dress of Somali men and women helping among the ruins. Over 300 people were killed; about the same number were injured.

To a country like Somalia, with around 14 million people, having 300 die in a terrorist bombing has a greater impact on its population than America’s 9/11. On that terrible day in 2001, 3,000 Americans, in a country of around 300 million, were killed by Islamists. Not that suffering of that type can be quantified, but in mere population terms, Somalia’s attack was nearly twice as impactful.

Not that this one event was rare, though. The most recent statistics from the Institute for Economics and Peace show that in 2015, Somalia saw 659 of its citizens killed in terrorist attacks. Over 90 percent of those attacks were perpetrated by the al Qaeda affiliate al-Shabaab, which most believe organized the recent attack.

Yet among the Institute’s Global Terrorism Index, Somalia only ranks as the eighth-most dangerous country for terrorism. Among those other countries sharing its desert terrain, the true North Africans, are Egypt and Libya, who rank ninth and 10th respectively. In Egypt, which is actively fighting Islamist groups, the Index reports 662 dead and 835 injured through terrorism, nearly all of which were instigated by the Sinai Province of the Islamic State. Libya, which remained untouched by terrorists until 2012, is reported to have 454 dead and 660 injured.

Algeria has been plagued by terrorists for years, and even Americans know of Nigeria’s horrific war against Boko Haram. Although, perhaps they are only aware because of Michelle Obama’s prayer on Twitter: #BringBackOurGirls.

Our prayers are with the missing Nigerian girls and their families. It’s time to #BringBackOurGirls. -mo pic.twitter.com/glDKDotJRt

In short, radical Islam has a presence in North Africa that makes America’s worries look like a walk in the park.

This is to be expected, no doubt, since those countries’ populations are nearly entirely Muslim. Radical Islamism has been resurrected for the modern age. Even if its radicals are a one-in-a-thousand type, you’ll still end up with an army.

Across the ocean sit the other infected parties, the ones we hear on the news often. Syria, Iraq, Lebanon and the lesser-known, but no less brutal, situation in Yemen. The king of it all sits further east and is, as the Trumpet’s editor in chief has been proclaiming since the early 1990s, the world’s number one sponsor of terrorism: the Islamic Republic of Iran.

In 1993, Mr. Flurry wrote of the biblical prophecy about a “king of the south” in Daniel 11: “These verses point to a king of the south that is yet future. And I believe all indications point to radical Islam, headed by Iran as this king.” At the time, as the Trumpet has explained, “Iran was hardly considered a serious threat outside its immediate neighborhood.”

Mr. Flurry also pointed to the rise of radical Islam in North Africa. “Northern Africa is turning into a battleground with enormously important prophetic implications,” he wrote in the April 2013 issue of the Trumpet magazine. He warned:

Iran has designs on being the strongest power throughout the region, and is extending its reach throughout North Africa.

But Iran isn’t the only one interested in Africa. Germany is making strong inroads as well. Both of these powers are racing to get as much control of North Africa as they can. They will inevitably clash with each other.

The reason this is so significant is that these two powers are prophesied to clash in the end time. Daniel 11:40 speaks of a war between “the king of the south,” which we can prove to be Iran and radical Islam, and “the king of the north,” which we know to be Germany leading a group of nations. (Request our free booklets The King of the South and Germany and the Holy Roman Empire for the proof of the modern identities of these powers.)

A great prophecy of your Bible is about to be fulfilled! You need to watch what is happening in the Middle East and Africa!

The same prophecies that talk about the king of the South in Daniel 11 forecast that it will be heavily involved in North Africa. For more on this, read Mr. Flurry’s article “Watch Algeria!” and his free booklet The King of the South.