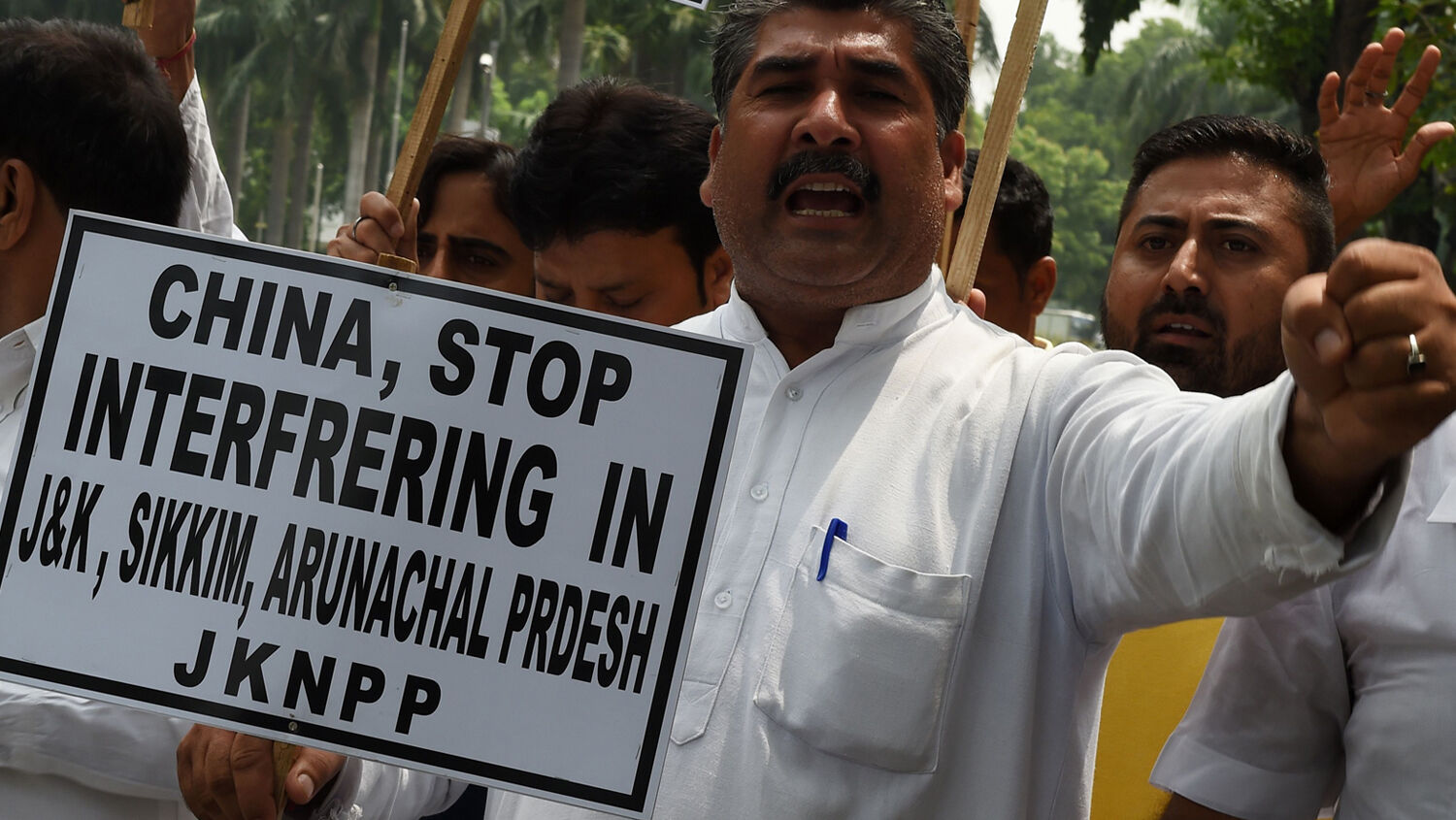 Indian activists of the Jammu and Kashmir National Panthers Party protest outside the Chinese embassy in New Delhi on July 7, 2017, in the wake of border tensions between the neighbouring countries.
MONEY SHARMA/AFP/Getty Images

While the world feared war, the Trumpet told you hostilities would end.

For the past two months, Chinese and Indian troops have been staring each other down on the Doklam plateau. The standoff began in June, when Chinese workers began building a road in this disputed area near Bhutan. This region has been contested by India and China for decades, and no recognized border exist between the two countries. The move prompted the Indian government to move hundreds of troops to the region, making it the “worst border dispute between the two countries in more than three decades,” according to the South China Morning Post.

On Monday, however, the tense situation suddenly dissipated when the two nations announced that they had agreed to an “expeditious disengagement” of their troops from the region. The details of the negotiations that took place to end the crisis are unclear, but it appears that China agreed to halt its road construction in the area, and India agreed to withdraw its troops. By the end of the day, India said that both sides had almost completed their withdrawals, which reestablishes the status quo for the area.

China and India both realize the importance of maintaining a healthy relationship, even though it is a strained one. Both nations have nuclear weapons, and even a much more limited conflict would have significant negative consequences. Indian Prime Minister Narendra Modi said at the St. Petersburg International Economic Forum in June, “It is true that we have a border dispute with China. But in the last 40 years, not a single bullet has been fired due to it.”

The agreement to end hostilities came just days before the next brics (Brazil, Russia, India, China and South Africa) summit in China from September 3 to 5. Most commentators agree that the summit provided China the motivation needed to end the hostilities. China feared that India might not attend the summit, endangering the stability of the group of emerging economies and embarrassing China in the process.

Wang Dehua, head of South Asia studies at the Shanghai Institute for International Studies, said, “China understands the importance of creating a favorable atmosphere for the success of the summit and the all-important party congress.”

Despite the tensions, it was announced on Tuesday that Prime Minister Modi would be attending the brics summit. China quickly took to the microphone Wednesday, seeking to “cast its strained ties with India in a positive light,” according to Reuters. Chinese Foreign Minister Wang Yi said at a news briefing, “What’s important is that we put these problems in the appropriate place, and appropriately handle and control them in the spirit of mutual respect and based on the consensus of both countries’ leaders. … There is huge potential for cooperation between China and India,” though he did not give any details.

Considering the economic and military heft that China and India possess, if they find a mutually beneficial way to cooperate, the payoff could be enormous.

Just a few weeks ago, the international media worried that this border conflict would lead to an all-out war between the two nations. Sydney Morning Herald called it “The China-India Clash That Could Lead to Nuclear War.” South China Morning Post warned, “China and India Are Reportedly Preparing for Full-scale War Over a Himalayan Border Dispute.” From the DailyO: “China Wants War With India, Make No Mistake.”

At that same time, the Trumpet declared “China and India Won’t Start a Big War Over Their Border Dispute.” Kieren Underwood wrote:

Much of our analysis stems from the Bible-based predictions of Herbert W. Armstrong published in his newsmagazine, the Plain Truth. One of his most prominent forecasts was of a huge power bloc led by Russia and China, called the “kings of the east.” Other Asian nations are likely to join this rising bloc.

A February-March 1985 issue of the Plain Truth told readers, “However it happens, Russia and Asian neighbors will ultimately find themselves in some degree joining forces out of necessity …” (emphasis added). Our booklet Russia and China in Prophecy says: “India—with its population of more than 1.2 billion people—is almost certain to join the Asian bloc that is prophesied to congeal in the end time.”

With this in mind, the Trumpet can tell its readers that, in the end, China and India will almost surely put aside their differences and border disputes to cooperate on bigger tasks.

Bible prophecy gives us penetrating insight into world events. While we may not know the specific details, the general outline of events is there for those willing to look into God’s inspired Word. If you want to know what’s in store for the Asia region, be sure to read our free booklet Russia and China in Prophecy.