Key takeaways about Germany and America from an international conference 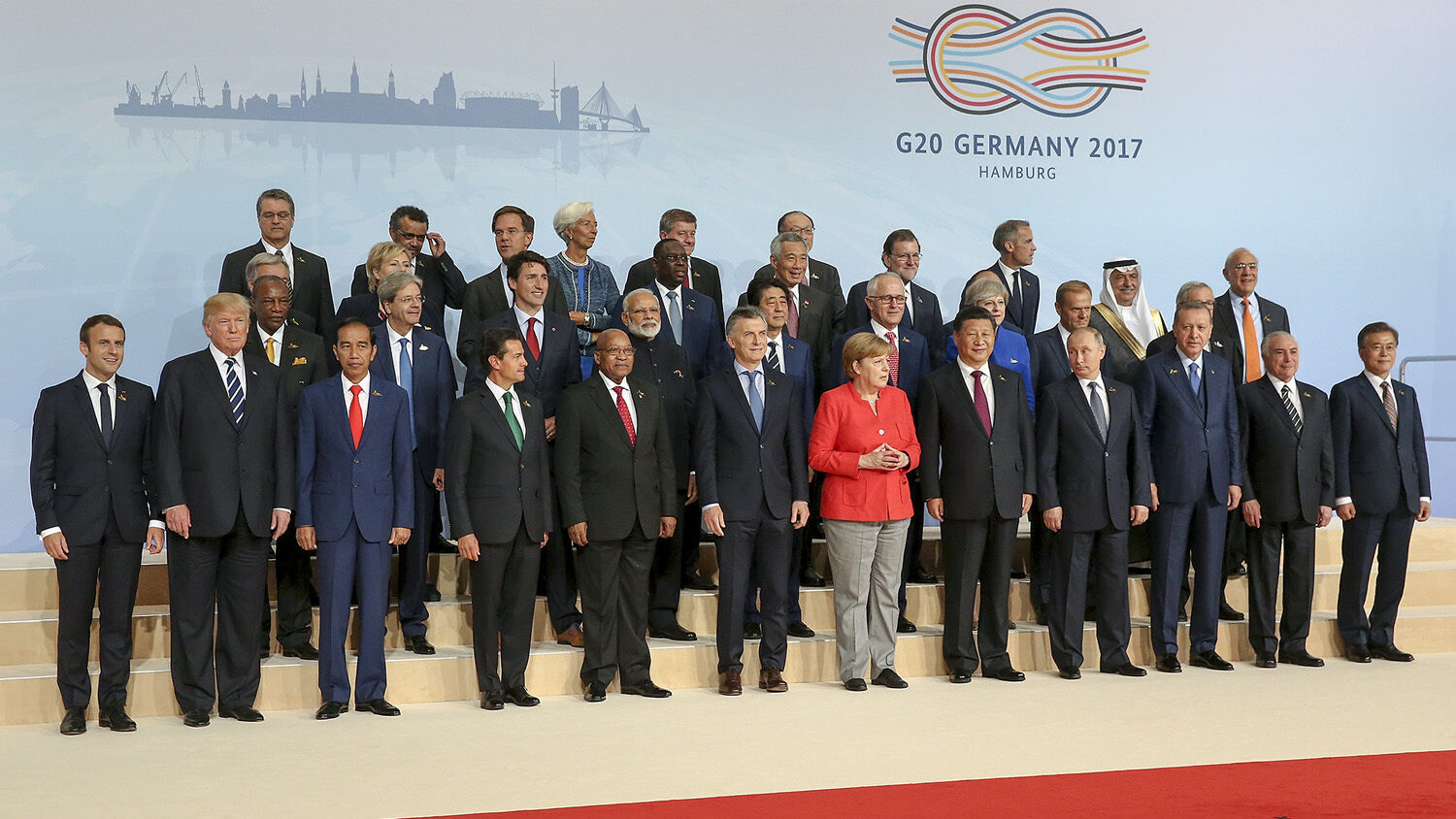 International leaders attend the group photo on the first day of the G20 economic summit on July 7, 2017 in Hamburg, Germany.
Getty Images

Key takeaways about Germany and America from an international conference

The G-20 meeting held in Hamburg, Germany, on the weekend of July 9 was in many ways like any other G-20 or G-7 summit—full of sound and fury, signifying nothing. It generated a flurry of headlines, but it is the type of event that will be forgotten in a month or two.

Although not much of consequence was decided, it was noteworthy if only for this reason: It shined a spotlight on some of the most important trends on the world scene.

On July 5 in Hamburg, in the run-up to the meeting, the European Union and Japan—two of the world’s leading economies—announced plans to form one of the largest and most powerful trade blocs in the world.

The timing of the announcement was deliberate, as was the location. Hamburg is Germany’s largest port, and Europe’s second biggest. The venue was chosen before Donald Trump was elected—but it is still clear that Chancellor Angela Merkel wanted to draw the world’s attention to Germany’s trade credentials.

Vox wrote, “Japan and Europe have a pointed message for the U.S.: We’re taking your place as global leaders in free trade” (July 6). The Economist wrote, “[N]ow both want to show that they can fill the vacuum left by America’s withdrawal under Mr. Trump from its role as the world’s trade leader” (July 8).

Combined, the economies of Japan and the EU are similar to those of the North American Free Trade Area (nafta). A trade arrangement between them is a big deal indeed.

Japan had planned to join a different, massive trade bloc: the Trans-Pacific Partnership (tpp). But Mr. Trump pulled the U.S. out of that agreement on his first full day in the White House. Then Europe quickly stepped in.

Vox quoted Edward Alden, of the Council on Foreign Relations, as saying, “I have no doubt the final rounds were accelerated to try to conclude the deal as quickly as possible and send a message that the EU and Japan are prepared to lead on trade even without the U.S. The fact that it was concluded right before Trump’s first G-20 summit is a symbolic poke in the eye to the Americans” (op cit).

Caroline Freund, of the Peterson Institute for International Economics, pointed out that the new trade bloc will be so large that the common standards it agrees to will inevitably set standards for the whole world. “They’ll get to be the rule-setters … setting the standard for global trade agreements,” she said (ibid).

“That’s the role the U.S. has played for decades, and it’s fading,” Vox wrote.

Once the conference got underway, America’s retreat from leadership continued. One of Angela Merkel’s big priorities for her time hosting the G-20 was Africa—and no wonder. Mass migration and Islamic terrorism from North Africa are two huge issues for all of Europe. But Donald Trump—attending the biggest international conference of his presidency so far—was so uninterested that he didn’t even bother showing up to those discussions; he sent his daughter instead.

The group’s pledge to uphold the Paris climate agreement left the U.S. obviously isolated. America had good reasons to pull out of the deal—reasons the Trumpet outlined in last month’s issue. But America has been demonized for decades as the biggest threat to the planet because it has refused to sign up—or to stay signed up—to agreements like this one. Other countries leaped on this opportunity to pose as the real moral leaders of the world.

The summit left the commentators talking about the G-19—the 20 major economic powers of the world minus America. As Slate wrote,”The nickname may stick: The summit seemed to indicate that other world powers are determined to unite against the Trump administration’s erratic isolationism. … It’s far from clear what a G-19 world will look like, but last week in Hamburg, we saw it starting to form” (July 10).

When Chancellor Merkel chose Hamburg as the location of the German-hosted G-20 summit, she wanted to show off the economic power, the culture and the coolness of Germany’s second-largest city.

The 20,000 police who were deployed in the city lost control. Foreign leaders, including the wife of the American president, had to be locked down while the mob raged nearby. Rioters looted stores, burned cars, and attacked police with rocks, bottles and fireworks. The mob injured nearly 500 police officers and caused millions of dollars’ worth of property damage.

One police spokesman called it a “new dimension” of violence. Justice Minister Heiko Maas said that “Germany has reached a historic high point in terms of politically motivated violence.”

Many Germans were furious. Tagesspiegel wrote that “the pictures of helpless police who could not secure state order and protection of property are a political catastrophe.”

The police even resorted to the constitutionally questionable step of receiving support from German military special forces.

The government has promised federal aid to help the city rebuild and has called for European Union help in combating far-left extremism.

Of course, not all the protesters were violent. Police estimate that around 20,000 demonstrated and around 1,500 rioted. But even the “peaceful” ones called their first official march “Welcome to Hell”—hardly an invitation to a restrained exercise of the right to peaceful protest.

But who were these far-left agitators who torched Hamburg?

The G-20 protests revealed that Germany has a dangerous problem with far-left movements. Hamburg has been a hub for home-grown extremism and far-left violence for decades, going back to such militant groups as the Red Army Faction during the Cold War. At the same time, it is also part of a growing, global, far-left movement.

As Douglas Murray pointed out, imagine if all this violence had been the work of far-right militia. “Would it not attract attention?” he asked in his Spectator blog. “Would it not also, quite rightly, lead to major opinion pieces and much opining elsewhere about the far right being ‘on the march’? Would it not be treated as something more than just weather by the bbc and other news organizations?” (July 10).

It would, quite rightly, be treated as a serious and ominous development. But because it has the label of “left,” it is being ignored outside of Germany.

The fact that tens of thousands (more than 100,000 according to many estimates) were willing to take part in such extreme protests in modern Germany shows a serious unhappiness with the current economic and political system.

The G-20 violence comes amid an upsurge in far-left violence across the country. Germany’s Interior Ministry recently concluded, “In the past few years, the acceptance and intensity of violence in the far-left scene has noticeably increased. This is especially true of violence against police and political enemies.” Such violence is rising across Europe. Europol’s latest terrorism report said there was a “sharp increase” in far-left attacks from 2015 to 2016.

You can see this same unhappiness and extremism in the rise of the far-left parties in Germany. There is the Left Party, the successor to the old East German Communist Party. Since a merger in 2007, this party incorporates the old Socialist Unity Party, which ran East Germany’s infamous Stasi secret police and backed the Soviet Union—the empire that comes in just behind Mao Zedong’s China on the list of all-time most murderous regimes. The Left Party wants to end nato and big business. It takes busts of Karl Marx on the campaign trail. After an interview with one of its leaders, even the columnist called “Charlemagne” in the left-leaning Economist magazine wrote, “I found myself praying that these people never get anywhere near power” (Sept. 20, 2013).

No wonder some Left Party members (in Bavaria, it’s the entire party) are under government surveillance due to fears that it wants to overthrow the state.

Yet the Left Party has been winning significant support in regional elections and has even joined the government state coalition in Thuringia after receiving nearly 30 percent of the vote.

The extreme left is rising in Germany. The rise of the fringe-right Alternative for Deutschland certainly is concerning and has drawn significant coverage. Yet it lags quite a ways behind the Left Party.

It’s important to remember that “Nazi” stands for “National Socialist.” It was as much a left-wing movement as a right-wing one.

The response from Germany’s more mainstream leaders was a revealing indicator of how Germany responds when confronted with this kind of crisis.

The United States has typically caved in to these kinds of demonstrators. When people rioted in Baltimore, the mayor actually said that she instructed law enforcement to protect demonstrators and that she “gave those who wished to destroy space to do that as well.” New York Mayor Bill de Blasio even traveled to Germany to address the crowd protesting Donald Trump.

But politicians from Germany’s main right-wing and left-wing parties have been queuing up to condemn the riots.

German Interior Minister Thomas de Maizière told a press conference that those behind the riots were “despicable, violent extremists just like neo-Nazis and Islamist terrorists.” Sigmar Gabriel, a leader of Germany’s main left-wing party, correctly identified the violence as an attack “on the rule of law.”

In America, the main left-wing party quickly sided with the protesters. In Germany, they condemned them.

Meanwhile, the entire spectrum of the German press is outraged. Germany has a far-left extremism problem that indicates a far wider dissatisfaction with the status quo. But outside of those far-left extremists, there is little tolerance for this kind of violence.

How will German leaders try to fix the ugliness that was on display to the world during the G-20?

Gabriel and Justice Minister Heiko Maas have called for a Europe-wide response, where countries share a database on left-wing extremists. Maas also called for those who supported this violence to be put on trial. Maizière called on the courts to impose “tough sentences.” Many others are calling for the government to shut down the well-known centers that support this kind of extremism and to implement significant changes to the way Germany polices and monitors these kinds of groups.

The rise of radical extremism is a global problem. Across the world, populations are dissatisfied with the status quo. But thus far, Germany is unique in demanding a forceful response to the left-wing extremist manifestation of this dissatisfaction.

The level of outrage gives a good indication of Germany would respond to other crises—to major Islamist terrorism, for example.

The rioting at the G-20 is a snapshot that reveals what is boiling under the surface in Germany. A Germany competing for leadership of the world’s economic system while national economies turn against America. A Germany with simmering political discontent. But also a Germany where many want stability and law and order—and will support a forceful governmental response against those who disrupt it.

The Hamburg G-20 summit shone a light on some of the biggest trends the Trumpet is watching. Germany and the U.S. are on different paths. America is becoming a pariah to the world; Germany is being hailed as its new leader. America is threatening to raise tariffs on German exports; Germany is one of the foremost preachers of free trade (though what it actually practices is another matter). America’s politicians cave in to the radical left; Germans rally around the rule of law.

The radical left is weakening America. But in Germany, there is strength.

The Trumpet has warned, based on Bible prophecies, that America is in decline. The same prophecies foretell a German-led, European new order that will replace it. The outlines of that new order were visible in Hamburg.