This article was written in 1975, when the author was a world traveler, editor in chief of the Plain Truth magazine, a prominent television and radio personality, chancellor of Ambassador College, and pastor general of the Worldwide Church of God—all at the age of 82. His final years were the most productive of his life. He died in 1986, at 93 years old. 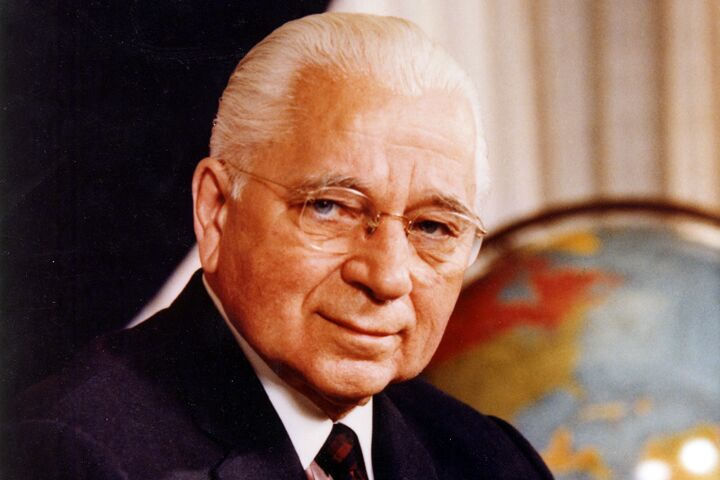 This article was written in 1975, when the author was a world traveler, editor in chief of the Plain Truth magazine, a prominent television and radio personality, chancellor of Ambassador College, and pastor general of the Worldwide Church of God—all at the age of 82. His final years were the most productive of his life. He died in 1986, at 93 years old.

There is no question I am asked more often, it seems, than “What is the secret of your long life, youthful vitality, energy and drive?”

“No one secret,” I usually reply. “I suppose many things enter into it.”

Recently I asked a man I had never seen before, who knew something of what is being done and accomplished, but had never heard of my age, if he would guess my age.

“Well,” he said thoughtfully, “I suppose in mid or late 50s—perhaps near 60.” He wouldn’t believe it when I told him I will be 83 in less than two months.

Many know that I frequently say jestingly, but significantly nevertheless, that I am now 37 going on 36. For a long time I went along with Jack Benny, claiming age 39. But after he admitted to a much older age, I decided to throw away a year every year.

Seriously, however, I doubt if many men of 50 or 55 could stand up under the rigorous ordeal of constant global travel, writing, radio and tv interviews, public speaking, the responsibility of major decisions in worldwide enterprises, and devoting 14 hours a day to vigorous, driving work.

Yet this very constant activity, I’m sure, is part of the “secret.” I have just finished writing another article, in which some of this activity was mentioned, and that triggered the idea to devote this Personal to the same subject and carry the subject further. I think, at this point, it might be as interesting and helpful to readers as anything I could write.

Ever since I was 21 years old, I have been interested in this question of youthful longevity. This life-long interest was sparked by a Chautauqua lecture I heard in 1913. The speaker’s name I do not remember, but he had been physician and physical trainer to President Howard Taft, whose term in office expired on March 4, 1913. This doctor-physical therapist had interviewed every person in the United States of 100 years or older. He had questioned every one as to the reason for such a long life.

Various ones gave various reasons. Some said it was because they never used tobacco, but others had used tobacco all their lives. Some gave credit to being teetotalers, but others used wine, especially in their old age and even gave that credit. And so it went.

Just one thing every centenarian did, yet none gave it any credit. Every one had taken a daily rubdown, either with a bath towel after a daily bath or with a massaging brush of some sort.

I was impressed by that. I have followed the daily rubdowns after a daily shower with near-perfect regularity ever since.

But I give that only partial credence.

I think my “seven laws of success” might be applicable here. [Mr. Armstrong’s booklet by this title is available for free upon request.]

Law number one is having the right goal. It seems most people have no goal in life at all. They simply drift aimlessly—going nowhere in life. I started my adult life with a definite goal. I had chosen the profession of advertising and journalism. But 48 years ago that was changed. I learned then that it had prepared me for the right goal, which became my life goal. It is a very great commission, and it is even yet far from finished. I think there is no other “secret” that has had more to do with preserving youthful vitality and zeal and keeping me alive and active 13 years past the supposed “allotted life span.”

That life goal keeps me always looking forward, in anticipation, not backward, living on the past. It impels me to observe carefully many of the other laws of success—the drive, the resourcefulness, the endurance—sticking to it with perseverance, when many others would have given up, retired and decided they were too old to stay on the job.

Goal number two is proper education to achieve the goal. Part of this education blends into the third law—maintaining good health. Without good health one can accomplish little. I make it part of my education to study the factors that maintain good health. I learned that we humans are just what we eat. We came out of the ground. We are maintained by food that grows out of the ground. I learned that some famous doctors say that approximately 90 percent of sicknesses and diseases are caused by faulty diet. So I studied, many years ago, to learn about nutrition and diet. I try to avoid excesses of starches and the carbohydrates. I learned that different people are of different chemical composition, and that is why one man’s meat is another man’s poison. I learned that I am a combination of chemical constituencies, but that calcium seems to dominate. Therefore I have tried to always consume a reasonable amount of milk, cheese, butter and other milk products, because they are strong in calcium. Could that be the reason I have not had to see a dentist in the last 48 years—although I did, prior to learning this point of health?

I haven’t followed a perfect regimen of diet, but I’m sure I have been more careful about the food I eat than most people. Traveling almost constantly these days, I am careful to eat only in the best hotels and restaurants, and I do not sample the strange foods of other nations, but stay on the plain and simple diet I’ve accustomed myself to these 48 years.

Part of my education about health has been to try to get the right amount of sleep and exercise (although I haven’t been getting in as much of that as I need recently), and to get plenty of fresh air and water. In traveling in faraway parts of the world, I stick pretty close to bottled drinking water.

Education is something one must pursue lifelong, if he expects to maintain efficiency, youth and longevity. I have always, therefore, kept my mind active. And that undoubtedly has contributed greatly to still being spry and active at 83 (calendar age).

This goal has served to prod me constantly in the fourth law of success—drive! I’ve kept a determined prod on myself all my life, to drive, drive, DRIVE myself on. “Aren’t you going to wear yourself out and shorten your life doing that?” one might ask.

Never! A person can rust out and into an early death, but, as long as I get sufficient rest and sleep and necessary short periods of relaxation, I shall never wear myself out. Along with this goes determination. Often, when I feel like letting down, I have to use determination and force myself to keep driving on!

The combination of all these things has helped me to practice the fifth law, resourcefulness.

The sixth law is perseverance—“stick-to-it-iveness.” Never give up, never just lie down and quit! Many a time I’ve felt like it. Sometimes I have given up and quit at bedtime, but after a night’s sleep it’s all a new ball game, and next morning I’m plunging into it with renewed vigor and enthusiasm!

Then comes the most important of all, the seventh law, which is the guidance of, and faith in and reliance on God the Creator. I’m in constant contact with Him all the day long—every day! I seek His guidance, constantly. I seek and rely on His help, His deliverance from troubles, His protection from physical harm. Things have happened I can ascribe only to presence of an invisible angel. But perhaps the greatest “secret” of all is that I rely on Isaiah 40, the last four verses. They constitute a promise from God, and I apply them and rely on God to keep them! Many times when people ask me, “How do you do it?” or “What’s your secret of such youthful vigor and such long life?” I just tell them, “Read the last four verses of Isaiah 40. You’ll find it there!”

Of course God expects us to do our own part. He does for us what we can’t do for ourselves! But when you put both together—your own best and add what God can do that’s beyond what you can do—you’ve got a combination that pays off!

Those are my “secrets.” If they have helped some of my readers, I’m very happy indeed!