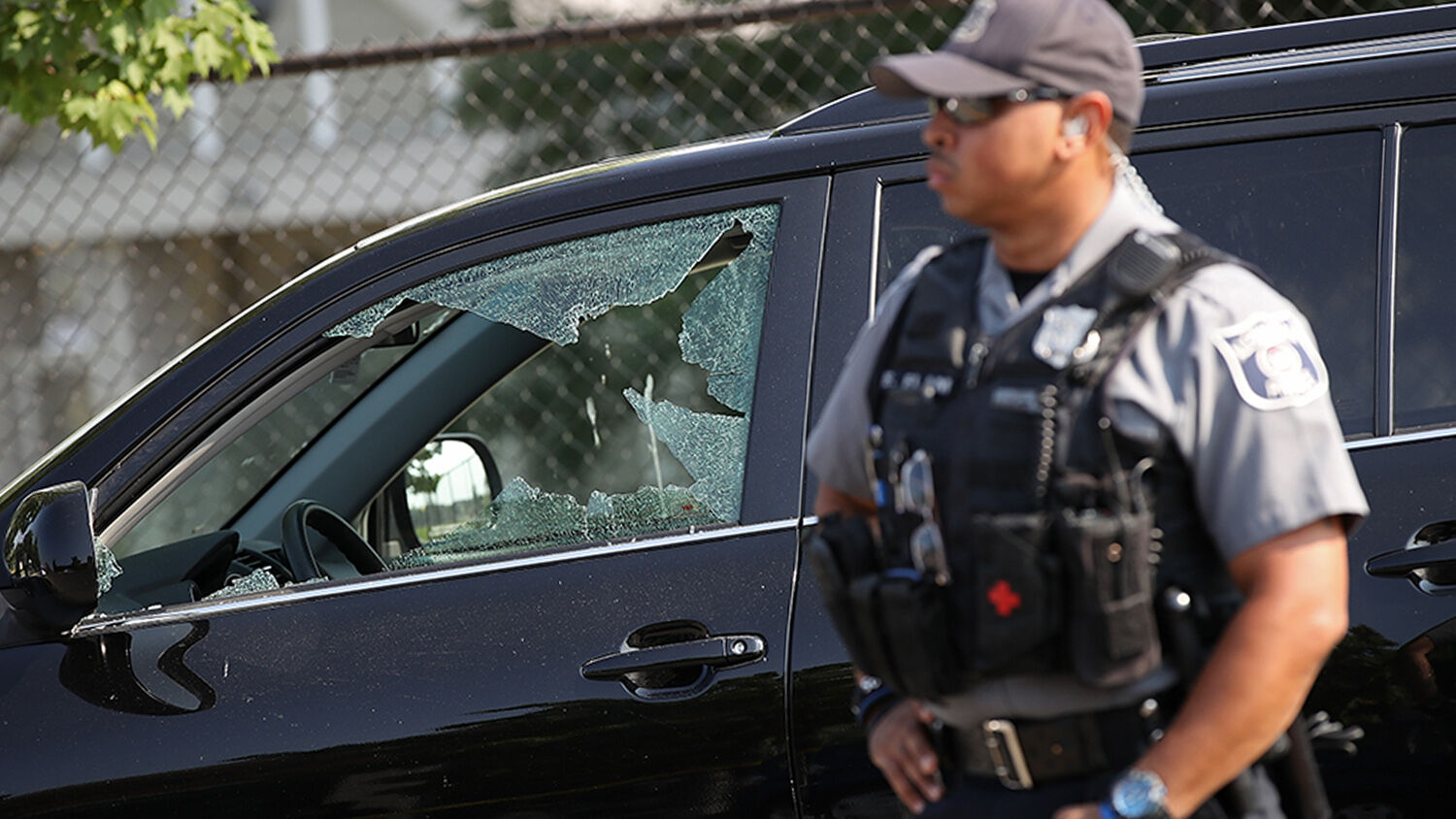 The high-profile shooting at a baseball diamond in Virginia was actually one of many incidents of left-wing violence over the past year.

Republicans or Democrats? That was the question Bernie Sanders supporter James T. Hodgkinson asked before he opened fire on four Republican lawmakers during a baseball practice in Virginia on June 14. Both sides of the political spectrum responded soberly and called for unity. Though this incident temporarily unified Americans, it brought to light a dangerous trend of increasing leftist violence.

Here are some of the other events that have taken place over the past several months.

August 2016 An elderly man is beaten by anti-Trump activists at a campaign fundraiser in Minneapolis, Minnesota. Activists threw debris and shouted obscenities at Trump supporters, then went after his motorcade.

October 2016 A Republican headquarters office in Hillsborough, North Carolina, is firebombed. Spray-painted on an adjacent building is this message: “Nazi Republicans leave town or else.”

November 2016 The night after the election, Olivia Corn, the president of the Cornell University College Republicans, is assaulted for being a Republican.

November 2016 A group of teenagers beats up a man in Chicago for voting for President-elect Donald Trump, shouting “Don’t vote Trump!”

January 2017 Antifa, an “antifascist” group, spends the morning of Inauguration Day causing havoc in Washington, D.C. Members of the group throw rocks, bottles and other projectiles at police officers, set a limousine on fire, and smash windows at several businesses.

February 2017 Antifa launches a violent protest and sets fire to campus property at the University of California–Berkeley, in order to prevent British media personality Milo Yiannopoulos from delivering a speech there.

March 2017 After speaking at Middlebury College, conservative speaker Charles Murray is approached by protesters wearing bandanas. Activists jump on and pound his vehicle while he is in it and throw a stop sign with a concrete base at it.

April 2017 Conservative writer Ann Coulter is threatened with violence if she speaks at University of California–Berkeley. She cancels her visit after law enforcement refuses to find a safe place for her to speak.

April 2017 Heather Mac Donald, a scholar of a prominent right-of-center think tank, is blocked from a college auditorium in Claremont, California, where she was scheduled to speak.

These are only a few overt leftist intimidation incidents out of at least 100 that have taken place against President Trump’s supporters over the past year, and experts who study extremism are taking note. Brian Levin is the director of the Center for the Study of Hate and Extremism in California’s state university in San Bernardino. He recently warned government officials in California that political violence in the state is increasing. He reported that since December 2015, more than 20 cases of political violence have occurred in California, increasingly involving individuals from the hard left. “What we’re seeing is the democratization of extremism and the tactics of radicalism,” he said, adding that although few people care about the trend, “I’m very concerned about it.”

Mark Pitcavage is a senior research fellow at the Anti-Defamation League’s Center on Extremism, which also has been warning of an increase in leftist violence. At a seminar in Washington, D.C., that occurred the weekend prior to the Virginia shooting, Pitcavage warned of the increase in extremist movements that experts have been seeing since the inauguration of President Trump. He stated:

I warned that we’d seen increased activity from people on the left who are very angry about the Trump administration. And I said, “There’s a real change for increased violence coming from the left.” But little did I know that my prediction would be confirmed so quickly and in such a shocking way.

Pitcavage and other security experts fear the situation is about to get worse. “I think we’re in a time when we can’t ignore the extremism from the left,” said Oren Segal, director of the adl’s Center on Extremism. “When we have anti-fascist counterprotests—not that they are the same as white supremacists—that can ratchet up the violence at these events, and it means we can see people who are violent on their own be attracted to that, I hate to say it, but it feels inevitable” (emphasis added throughout).

Last year’s presidential race was undeniably one of the most disrespectful and uncivilized in recent American history. Since the inauguration, things haven’t changed much. A poll conducted by cbs from June 15–18 reveal that two thirds of Americans believe that “the tone and level of civility in our political debates have been getting worse in recent years.” When asked if the tone of current political debate is encouraging violence, 73 percent responded “yes.”

Neither side is blameless. Donald Trump is certainly not the most tactful president in American history. But rather than trying to unify and strengthen America under a new presidency, the left has continually done everything it can to criticize his administration and bring it down.

Ann Coulter reminisced about the media’s hysterical reaction to then-candidate Trump when he “refused to preemptively agree to election results, saying he’d ‘look at it at the time.’” In her article titled “The ‘Resistance’ Goes Live-Fire” on June 14, she wrote:

Then Trump won, and these very same hysterics refused to accept the results of the election.

Imagine if Trump lost and then announced that he’d joined the “resistance.” He’d be accused of trying to activate right-wing militias. Every dyspeptic glance at an immigrant would be reported as fascistic violence.

The left has been anything but accepting of President Trump’s election. Since coming into office, there has been no end to the deluge of alleged scandals and conspiracies by which the media are trying to use to get him impeached.

At a press conference, Democratic leader Nancy Pelosi was asked about the comments from Republicans in Congress who said that the left was in some way to blame for the June 14 shooting, since the assailant was motivated by anti-Republican sentiment. Her response:

But the gunman asked outright if his would-be victims were Republicans or Democrats before he shot them. The left is inciting violence by calling President Trump “Hitler,” “fascist,” “white supremacist,” “terrorist,” “racist” and “criminal.” Prominent liberal singers, actors and other celebrities have expressed desires to blow up the White House or assassinate the president in other ways.

In November, a well-known performer released a gory music video in which he decapitates President Trump.

In May, a former television host for cnn was photographed holding a fake, bloody, decapitated head of Donald Trump—some noted that it reminded them of Islamic State propaganda.

This month, New York City’s Public Theater staged a production of Julius Caesar in which Caesar is portrayed as President Trump and is brutally stabbed to death by members of the Senate.

These are just a few examples of the hate-filled rhetoric permeating leftist media. Pelosi could have admitted responsibility for the left’s part in inciting violence and helped to prevent future atrocities by making it clear that such rhetoric is unacceptable. But instead of accepting responsibility, she turned around and pointed the finger at the Republicans even in the aftermath of an attempted mass shooting that was undisputedly motivated by partisanship.

Sen. Bernie Sanders has been no better. While he condemned the shooting, his tone remained the same. This became apparent during an interview on June 19 concerning Republicans’ efforts to repeal Obamacare. During the interview with Elizabeth Warren, he told her she needed to “act in an unprecedented way” and “stand up and fight back in every way that you can.” While he wasn’t telling people to go grab their guns, as the National Review brought out, words like this have consequences:

If you call Trump a fascist often enough, people will begin to believe you. If you insist that this is a “Weimar moment” in which Western democracy is mortally threatened, a Weimar moment is what you’ll get. Given the number of Americans predisposed to believe a fascist with a real shot at the presidency can only be defeated through violent means, the conditional statement that begins with “If Donald Trump is a fascist” can only end one way. When pundits tell their readers that a fascist is mustering his forces to destroy American democracy, those readers react in a way that might be appropriate if Hitler’s reincarnation were indeed on the way to winning the presidency.

America has become deeply divided, socially and politically. As Trumpet executive editor Stephen Flurry brings out in his Trumpet Daily Radio Show, it won’t be long before the right stands up and fights back. Chris Hamilton, an expert on American extremist movements, said he has been keeping tabs on far-left websites and talk shows. He has noticed the same sentiments that he used to hear on the right are popping up in the middle and on the left. “I’m really worried about rising civil strife in the U.S.,” he said.

America is heading in a dangerous direction. It is destroying itself from the inside out. But what is the cause of these problems?

Revelation 12:12 reveals that Satan is our deadly adversary. He is the one behind these dangerous developments. The devil is full of wrath, and he has gotten control of the radical left. The fruits prove it. These people want to bring the system down. They are deceived (verse 9). But the problem is much deeper than that.

Our people don’t understand their Bibles as they once did. They don’t understand the many scriptures about Satan the devil. He has his agenda against America, and it is prevailing because of America’s sinful way of life. … Those who fail to see the devil behind what is happening in America today will end up being his victims.