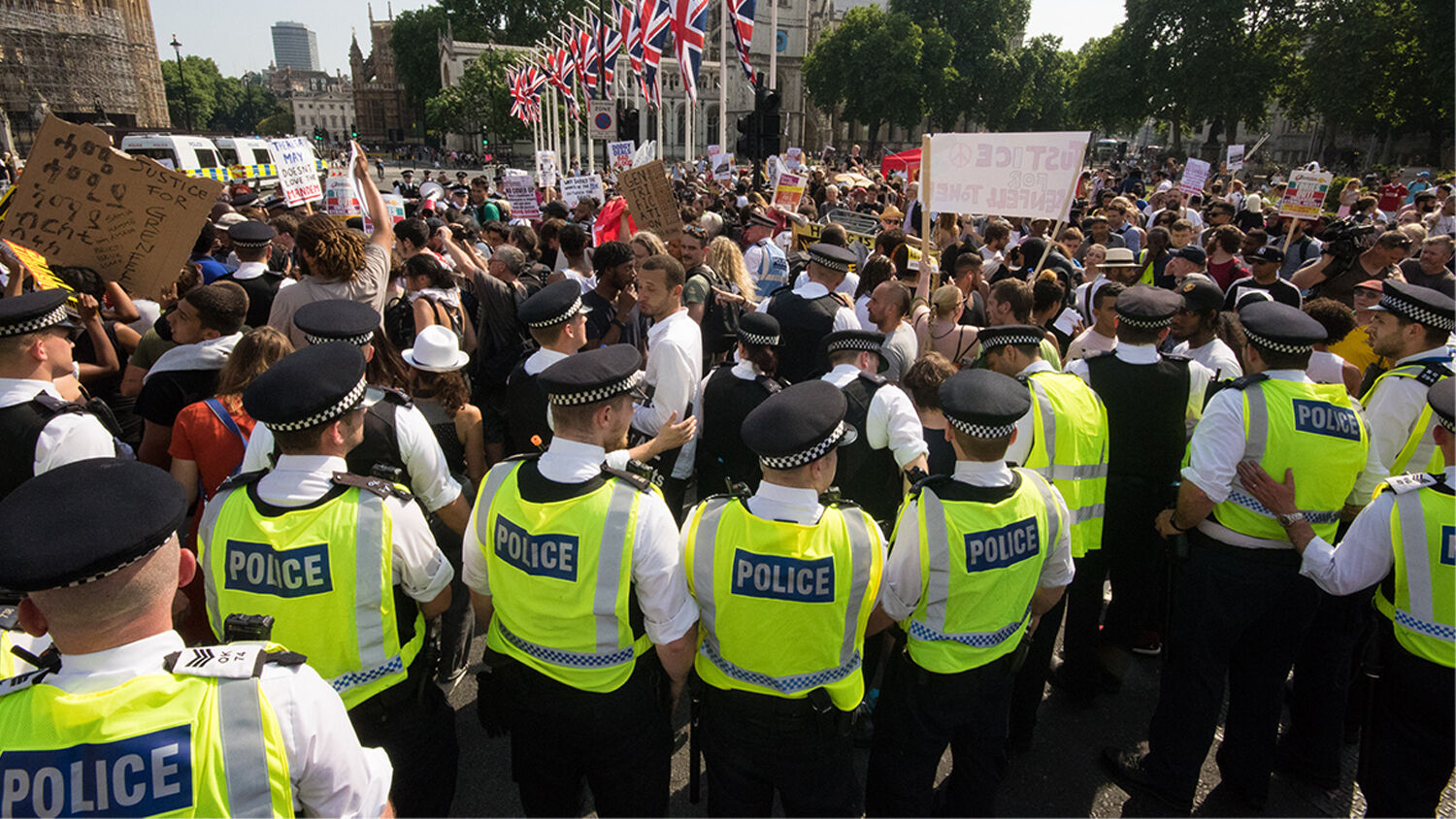 Protesters block the road outside the Houses of Parliament on June 21, 2017 in London, England.
Getty Images

Britain’s rising socialists will jump on any opportunity to stir up anger against the government.

Far-left activists aimed to shut down the government yesterday.

“We’ve felt our power,” wrote the Marxist group Movement for Justice by Any Means Necessary (mfj), as it celebrated the achievement of radical-left Jeremy Corbyn in Britain’s election. “We’ve tasted victory. Now we must escalate our actions to take down this rotten government, which has lost all authority to govern.”

Wednesday was supposed to be a “Day of Rage.”

“This government has presided over thousands of deaths from seven years of austerity and anti-Muslim, anti-immigrant racism and bigotry,” read one mfj poster at an earlier demonstration. “They need to go. Now.” Conservative members of Parliament, the group said, had gained their seats through racism.

But this was about more than just general anger against the government. On June 14, Grenfell Tower, a 24-story apartment block, burned down. The death toll is believed to be 79—the highest number killed in any fire on mainland Britain for over 100 years.

Now the far left has jumped on the fire as a reason to stir up anger against the government. The tower contained mostly council housing—government-subsidized accommodations generally rented by those with lower incomes. This gave the left an opportunity to turn the fire into class warfare.

“It’s a war,” one activist said. “It’s rich against poor right now.” According to the left, the wealthy conservative government doesn’t care about the poor—and the wealthy are to blame for the fire. Last weekend, the mfj handed out leaflets saying that those who died in the tower were “murdered by the rotten capitalist system.”

Council housing in London also tends to be home for a lot of ethnic minorities. So the far left is also accusing the government of racism. The mfj accused authorities of conducting “ethnic cleansing.” It wrote that:

Politicians and many community and religious leaders will be looking to divert our rage and fury into inquiries, investigations, reports, court hearings and parliamentary processes.

We will not accept those brush-offs and diversions; we will not settle for less than the destruction of May’s coalition of austerity and bigotry—we must bring down this government.

In the end, the “Day of Rage” was much smaller than its organizers had hoped. Only a few hundred turned out. There were a few skirmishes with police, but it came far short of their goal to “shut down London.” Perhaps this is because the former residents of Grenfell were themselves against the protest. The Clement James Center, a local charity that provides shelter for some of the victims, said:

There has been a “Day of Rage” announced for Wednesday, trying to bring London to a standstill. We cannot emphasize enough how against this many of the affected residents we’ve spoken to are, and they do not want their grief hijacked for any violent or destructive means.

A website for the local community declares that “Grenfell residents are totally opposed.”

Whatever the reason for the “Day of Rage,” its failure cannot allow us to overlook what the left tried to do. Britain’s far-left leaders jumped on a catastrophe and tried to use it to incite violence against the government.

On Friday, angry demonstrators stormed Kensington Town Hall—the local government offices for the area. They found a man in a suit who looked important and attacked him.

But this man had nothing to do with the tower—apart from the fact that he had volunteered to help those who had lost their homes. Some reports say they attacked him because of a mislabeled picture on the Internet.

That’s almost a perfect metaphor for the anger of the whole movement—except it is not a case of mistaken identity. This anger is deliberately being misdirected. Britain’s Labour Party used much of the same material. Telegraph’s Christopher Booker and his one-time coauthor Dr. Richard North both point out that the European Union took control of Britain’s building safety standards back in 1989. Until Britain is out of the EU, it cannot set its own fire-safety standards without permission from the European Commission. And the EU has continually prioritized energy efficiency over fire safety. Grenfell Tower was following the EU’s lead.

That’s not say that this is the EU’s fault. It’s too soon to say; all the facts aren’t yet known and the inquiry into the fire is far from complete. But that hasn’t stopped the far left attacking the government. Melanie Phillips wrote in the Times on Tuesday:

Yet the fire is being exploited in a sectarian and cynical way to fuel public anger and provoke disorder. Those being unjustly damned for causing the disaster are the Tory government and the rich. In other words, it’s class war.

The protests are being fomented by professional agitators: You only have to look at the quality of the Socialist Worker posters reading “Tories have blood on their hands” to realize these are not spontaneous eruptions of public anger. The Grenfell tragedy is being appropriated as part of a broader and more sinister political strategy. On Saturday, there were further protests across the UK with activists waving placards saying “Defy Tory rule.”

What’s happening is an attempt to stir insurrection on the streets against the democratically elected Westminster government.

Labour leader Jeremy Corbyn was quick to join in the class war. “Kensington is a tale of two cities. The south part of Kensington is incredibly wealthy; it’s the wealthiest part of the whole country,” he said. “The ward where this fire took place is, I think, the poorest ward in the whole country.”

Corbyn called for the government to confiscate empty homes in the area owned by the wealthy and use them to rehouse the victims of the fire.

This is a radical proposal—comparable to Robert Mugabe’s confiscation of farms from white farmers—and it would have devastatingly similar effects. Secure property rights are a crucial part of the rule of law. You cannot have a successful economy without them. What’s the point of any kind of long-range investment if the government can come and take your property? There was no need for such drastic measures—the government took a much more straightforward step of buying apartments in the area to house the victims.

But perhaps what is most surprising is that the country agrees with Corbyn. He is using this tragedy to try to move the whole country to the left. Fifty-nine percent said they agreed with his policy, and only 28 percent opposed.

When interviewed on Talk Radio,mfj organizer Karen Doyle refused three times to distance her movement from any violence or to discourage violence. Shadow chancellor and Corbyn’s right-hand man, John McDonnell, has repeatedly said this government is “not legitimate” and does “not got a right to govern.”

When interviewed, McDonnell did call for peaceful protests, but this is at odds with his earlier statements. If the government is illegitimate, than surely that means citizens do not have to submit to its authority.

In years past, McDonnell has been much less peaceful. He has praised violent protesters as “the best of our movement.”

“I don’t want to just bring down the government anymore,” he said in 2011, “I want to destroy the system.” In 2013 he called for “insurrection,” saying, “We want to bring this government down by whatever means we can.”

It’s clear that the hard left thinks it now has the chance to mount a coup. Aided and abetted by large sections of the media, which have presented Corbyn’s election defeat as a victory, they have set out to foment insurrection on the streets in order to overturn the result.

This strategy was plotted before the Grenfell fire. Now it is enabling these agitators to incite hatred and violence by claiming that the Tories didn’t just steal the election but have committed murder.

Many naive Labour voters believe Jeremy Corbyn is a “nice man.” The reality is frighteningly different. A fearsome tragedy is being cynically politicized. Even before all the dead of Grenfell Tower have been retrieved and buried, Labour is unleashing mob rule in their name. Compassion is being hijacked and weaponized in what is nothing short of a planned uprising against democracy itself.

I find it disturbing how the politics of it all have become so toxic so quickly. I’ve never known a tragedy turn so quickly. The discourse has become so poisoned, it’s going to get very ugly in the UK. I fear that does not bode well for forging unity over Brexit. It’s very concerning.

They failed on Wednesday to incite their “Day of Rage,” but all of the activists and groups are still around. Trade unions are planning a march for July 1. As Karen Doyle said, “We’ll continue beyond today, until this government is brought down.”

Going forward, every disappointment in the government, every national tragedy will be “weaponized.” As every new disaster hits the nation, the same people will move fast to stir rage against the government.

Trumpet editor in chief Gerald Flurry describes the same trend in America in his booklet Great Again. Whenever there is any kind of incident involving police and race, “there are some who are scrutinizing and magnifying this issue for evil purposes.”

“They are using it dishonestly to justify or excuse some terrifyingly dangerous behavior,” he writes. “They are stirring up emotion and anger—but none of it is truly intended to solve the problem.”

The same trend is in full force in Britain. To learn what is really behind it, read the chapter “Where America’s Race Riots Are Leading”in Great Again. The events may be in America, but so much of the analysis applies equally to the UK.