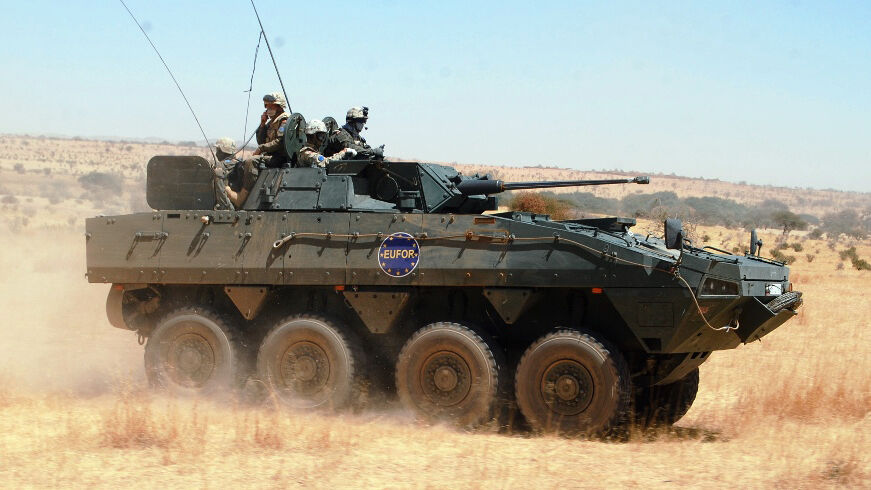 But it’s not the start of an EU army, of course.

After years of arguing and hesitation, the European Union finally has a military headquarters. It’s incredibly tiny, but, as Belgian Foreign Minister Didier Reynders said, “It’s a first step.”

On March 6, foreign and defense ministers reached an agreement on the functions of the new headquarters: It would be for military training operations only. By starting with such a small, innocuous function, the EU has been able to brush aside concerns that establishing this institution is equivalent to beginning a European army.

EU foreign affairs chief Federica Mogherini said on May 18 that the “political decision is finalized.” Just days before, the United Kingdom still objected that the description of the headquarters “made it sound as though it was a military command structure or the nucleus of a future EU army,” the EU Observer said.

The new headquarters would be “officially in place” in “a couple of days,” according to Mogherini’s comments on May 18, so by now, the headquarters should be functioning. Those functions include assuming responsibility for the “three EU training missions deployed in the Central African Republic, Mali and Somalia.”

Such a mustard-seed beginning was mocked in the Telegraph, which quoted a Whitehall source saying “the so-called ‘HQ’ amounts to eight or nine people all of whom have existing jobs and will come together to work with the existing general who heads the EU military. It’s about as low-ambition as you can get away with.”

And yet the only reason this British source can mock this new EU headquarters is because Britain’s dissenting opinion has lost its power.

Meanwhile, the realists recognize the potential of such a small development. Geoffrey Van Orden, a former British Army brigadier and Conservative member of European Parliament, says: “This is inevitably part of a wider ambition to really create a separate defense capability, an EU army in short.” New French President Emmanuel Macron—a europhile—is telling Europeans that they must “learn to live with the fact that Washington wishes to, in the long term, concern itself less with the security of our Continent.”

It starts, by necessity, with an inconspicuous, non-combatant, and symbolic headquarters. But as Trumpet contributing editor Richard Palmer said, “It’s not hard to imagine this then just taking one extra step and saying ‘Well OK, we’re going to allow it to coordinate combat missions as well.’”

A second decision concerning EU “battle groups,” made on the same day, is the one likely to have a more immediate impact.

These battle groups were designed as “rapid reaction forces” of about 1,500 soldiers, sent out to stop crises when needed. Each of the 18 battle groups is provided by a different coalition of EU nations and is on call six months at a time. Since their creation in 2007, the battle groups have not been used. One reason is that any EU nation can veto their use. Another is that the nation providing the deployed troops must pay the costs of using them. No one nation wants to fork out the costs for a European mission.

Imagine this idea in the workplace: Every six months a new employee is assigned to “crisis management”—but he has to sort out the company crisis on his own time and with his own money. If a crisis happened while it was your turn, you would do anything to get out of it.

So EU defense ministers on May 18 decided the deployment of battle groups would be paid for out of the EU budget. In workplace terminology: This time, you can handle the crisis on work time, and the company pays to sort out the crisis.

In effect, prepare for the battle groups to actually see some action.

In light of these developments, we turn to a quote from Herbert W. Armstrong:

The Europeans are far more disturbed about their safety in relying on United States military power to protect them than Americans realize! … Europeans want their own united military power! They know that a political union of Europe would produce a third major world power, as strong as either the U.S. or the ussr—possibly stronger!

Besides the anachronistic reference to the ussr, you could be forgiven for mistaking this as a quote from the past few years. Compare it to Macron’s recent warning that Washington won’t be around to “concern itself … with the security of our Continent.” And yet, Mr. Armstrong made this comment in 1978.

To put it in Mr. Armstrong’s language, Telegraph critics “to the contrary notwithstanding,” an EU army will be the result of what we see being decided. That’s what the Europeans want and Mr. Armstrong had forecast ever since he began publishing the Plain Truth in 1934.