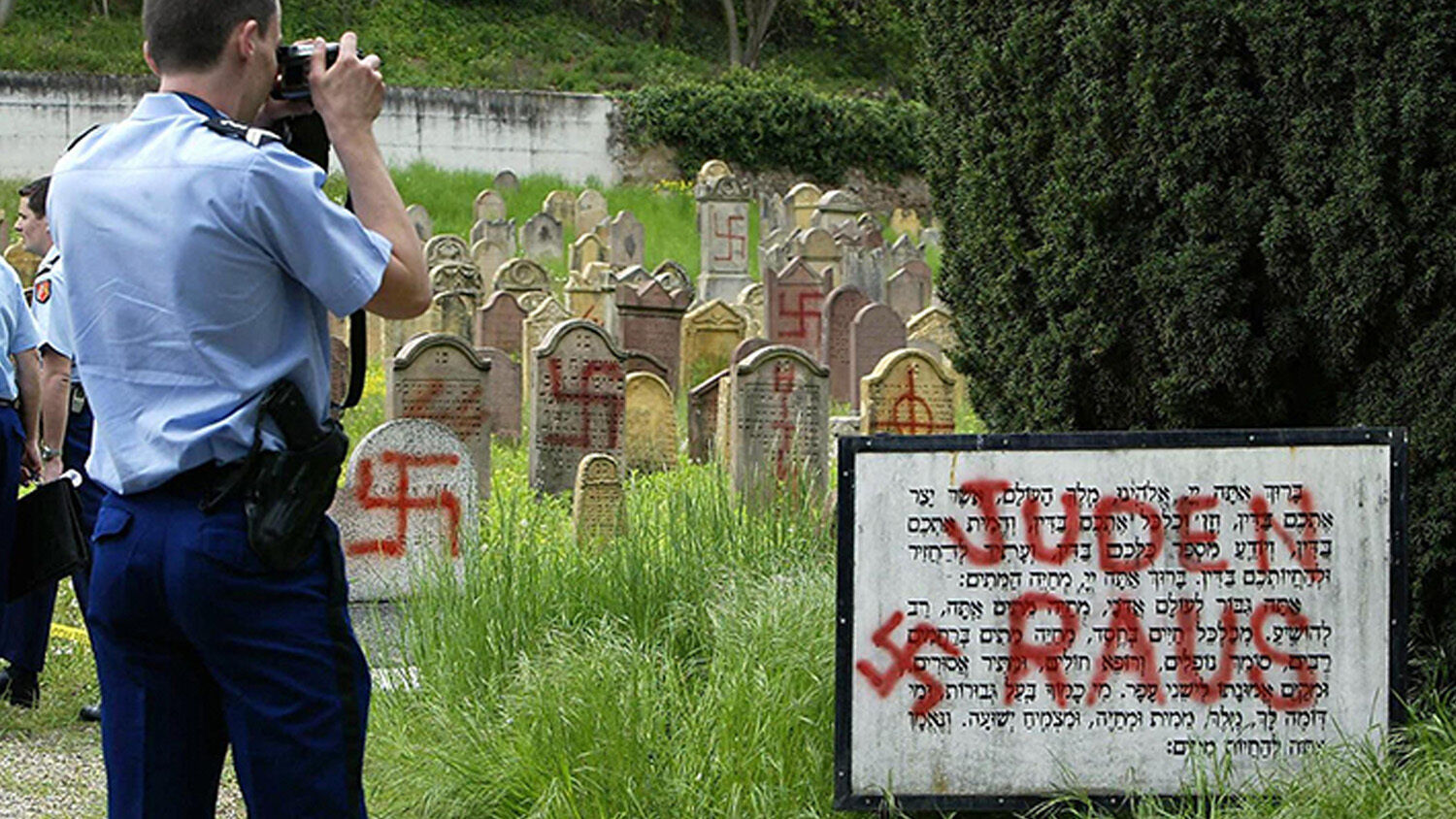 An anti-Semitic inscription written in German ‘Jews Out’ at a Jewish cemetery.
FREDERICK FLORIN/AFP/Getty Images

The German federal government’s anti-Semitism report released on April 24 reveals that 33 million Germans now hold anti-Semitic views. The proportion of Germans who agree with an anti-Semitic statement has increased from 28 percent in 2014 to 40 percent in 2016.

This 300-word report commissioned by the Friedrich Ebert Foundation, a Social Democratic Party research institute, shows 40 percent of its participants agreed with this statement: “Based on Israel’s policies, I can understand people having something against the Jews.”

Dr. Josef Schuster, head of the Central Council of Jews in Germany, noted last month that Germany is “also more frequently confronted with Israel-related anti-Semitism.” He said to Die Welt, “We already notice that in German society solidarity with Israel has declined. The fact alone that the word ‘Israel-critic’ can be established here shows this.”

Petra Pau, a Left Party deputy in the Bundestag, has also warned about the rising anti-Semitism, saying, “Anti-Semitism is a problem of the entire society” and it has become respectable to harbor Israel-related anti-Semitism.

The report was released the same day that Foreign Minister Sigmar Gabriel arrived in Jerusalem to meet with Israeli Prime Minister Benjamin Netanyahu. After discovering Mr. Gabriel’s intentions to meet with the nongovernmental organization Breaking the Silence, a group that cultivates anti-Semitism, Netanyahu said he would rescind his invitation if the German foreign minister met with the group. Mr. Gabriel chose Breaking the Silence over the prime minister of Israel.

Anti-Semitism has been growing, not just in Europe, but across the world. In “Anti-Semitism: Why You Should Be Alarmed,” Trumpet writer Brad Macdonald noted that if anti-Semitic attitudes are not dealt with, they will lead to a much more dangerous reality. He wrote:

Much like it is today, hatred toward Jews was politically fashionable and socially acceptable in Britain and the rest of Europe during the 1930s. …

Hatred of Jews was as much in vogue in America as it was in Europe. “The worst period of American anti-Semitism,” wrote history Prof. Leonard Dinnerstein, “was sandwiched between the ends of World War i and World War ii” (Anti-Semitism in Times of Crisis). By the mid-1940s, recalls Dinnerstein, animosity toward Jews had swelled to the point where many American Jews actually feared that the anti-Semitic pogroms occurring in Nazi Germany were about to spread to America.

This global anti-Semitism came with significant consequences. Because hatred of Jews was in style and enormously pervasive, Western leaders during the 1930s were largely blind to the apocalyptic destination of the raging anti-Semitic river. In this sense, the subliminal support given by British, European and American governments and society to Hitler’s anti-Jewish ideology and policies actually made the gas-chamber-style anti-Semitism of the 1940s inevitable!

History’s warning is thunderous and undeniable: Pre-World War ii trends in Britain, America and Europe show that anti-Semitism is a barometer of crisis! …

Today, the briskly flowing, unchecked river of anti-Semitism that cut across the planet during the 1930s has been resurrected. If we understand history, we can know that this torrent of hate and violence, when it reaches its high-water mark and finally overflows its banks, will not only engulf the Jews and the Jewish state, but will also spill over and swamp entire nations and regions.

To gain a deeper understanding on this concerning trend, read “Anti-Semitism: Why You Should Be Alarmed.”