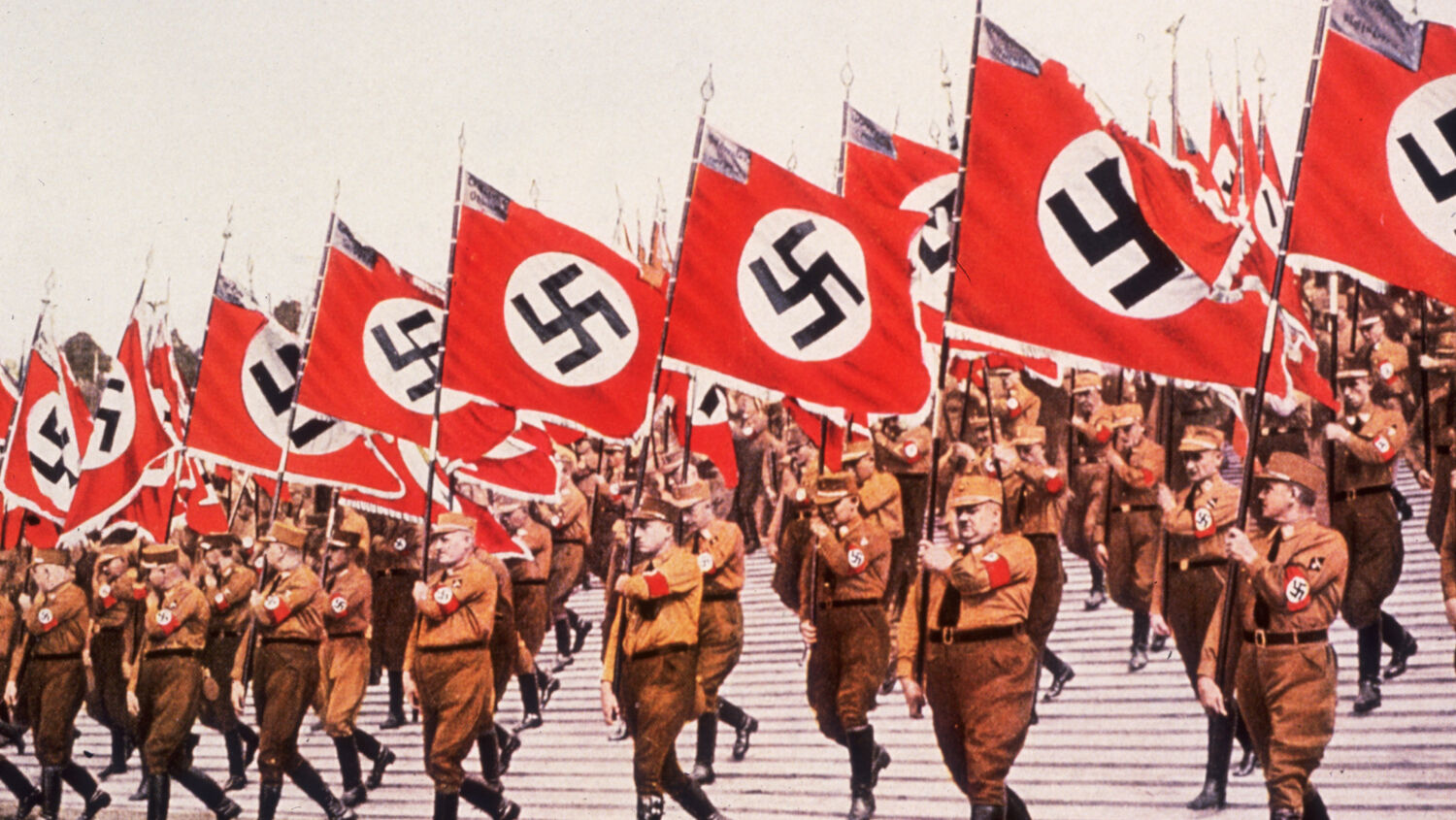 The entry of the colours, or Swastikas at the German National Socialist Party Day at Nuremberg.
Hulton Archive/Getty Images

One of Germany’s own warns that the nation is prepared to repeat World War II.

“Don’t trust us,” Niklas Frank, son of a Nazi war criminal warned. In 1946, when Frank was 7 years old, his father was executed for war crimes. Hans Frank was the governor general of Nazi-occupied Poland in World War ii. Niklas Frank despises his father for crimes he committed against humanity. Frank currently lives in rural northern Germany and travels around his nation giving speeches about his notorious father and the legacy of Hitler’s Nazi Germany. In a recent interview with the bbc, he explained that he feels he has to speak—because no one else does.

Everybody was silent. They wouldn’t talk about the past. And this I couldn’t endure because I always wanted to know how a society behaves and changes to a dictatorship. And I always had a feeling that Germany is still prepared to do this. And though I looked closer toward the family and friends, and I found out that still there’s something in the German people which makes me fear them.

What happens when there is a change in government, a change in circumstances for Germany? Mr. Frank warned that Germany is still capable of doing and prepared to do what it did in World War ii.

Discussing this interview, the Independent wrote that “the European Union made [Frank] feel personally secure and had helped keep the peace following hundreds of years of war on the Continent.” For 70 years of the post-World War ii global order, the United States has been the policeman, the superpower propping up Western Europe, protecting it from the Soviet Union. But in the late 20th century, the Soviet empire collapsed, and the wall dividing Germany and Europe came down, uniting the massive potential power bloc. Frank said as long as everyone was in the Union together, everything felt safe. But with Britain leaving and the rise of nationalist movements across Europe, he said he is observing some very disturbing changes, particularly in Germany.

“I still love Germany. I love being world champion in football, for instance. Really, I am a nationalist.” He said he agreed with German Chancellor Angela Merkel’s open-border policy that allowed more than 1 million refugees into the country. But along with the migrants, came a dangerous view. Frank said: “As you can see with Merkel and the refugees, everything changed because the silent majority … as if it were Jews again … (said) ‘Ah, this swamp is coming.’”

“You feel so insecure about your country today …?” the interviewer asked. Frank interrupted him, “Don’t trust us.”

Frank warned that with cracks and weaknesses emerging in the Union, Germany is left as the strong one. So long as things are going well, Frank explained, Germany could continue being the bulwark of moderation and tolerance compared to other European extremist groups.

As long as our economy is great, and as long as we made money, everything is very democratic. But let’s wait, and hopefully not see, if we have five to 10 years of heavy economic problems, and the swamp is a lake and as a sea, and we swallow again everything.

Mr. Frank’s basic understanding of history points to something the Trumpet has been watching for and warning about for more than 25 years. He specifically spoke about economic problems bringing about a crisis mentality. This is precisely what Herbert W. Armstrong forecast would happen. In the 1950s and ’60s, he said that an upcoming economic crisis would trigger one final European unification.

Frank is already warning of a silent majority rising up, treating refugees the way that his father’s generation treated Jews. The swamp is coming! “Don’t trust us,” he said. We have been saying this for years! Now this sobering warning is coming from one of Germany’s own, a man who personally knows something about Germany’s dark side.

In my father’s latest Trumpet article, “Germany and the Last Holy Roman Empire,” he pointed out that, just as Niklas Frank is saying, there have been some very disturbing changes in Germany in recent years. In 50 years, Germany has gone from being one of America’s very best friends to being one of its biggest critics, particularly since the election of United States President Donald Trump. “Few people recognize this, but a prophecy in the Bible actually describes the relationship between the U.S. and Germany in our day,” my father wrote. That “lover” relationship began after World War ii, after America defeated the Nazis and spent billions of dollars to rebuild Germany.

“But is trusting Germany a good idea?” he asked. Germany has historically been right at the center of conflict. He continued:

Since the dawn of the Holy Roman Empire in a.d. 554, Germany has been a curse on this world in many ways. Most of the time, Germany has led this bloody church-state combine. This gruesome war machine will become a great enemy of America, Britain and the Jewish state in the Middle East—one final time.

Some German and European leaders are lionizing the history of the Holy Roman Empire. There is strong evidence that some are actually preparing for one final resurrection of that empire!

The late European parliamentarian Otto von Habsburg said, “The [European] Community is living largely by the heritage of the Holy Roman Empire, though the great majority of the people who live by it don’t know by what heritage they live.”

Germans are proud of Charlemagne’s legacy! And they are doing what they can to resurrect it. But what happens when the strongman comes along? Like Niklas Frank said, the mentality changes when a dictator comes along, and he is preparing for another strongman—just like the Trumpet has been warning. Frank said he felt a certain comfort in the European Union, but British economist Bernard Connolly called the EU merely a “cloak for German ambitions”! Whatever comfort there may have been in the European Union could never have lasted forever—at some point the cloak would come off.

Frank is one of the last of his kind. “In a Restless Germany, a New Generation Tires of the Shame for Nazi Crimes,” Robert Fulford wrote in the National Post:

When the [Holocaust] Memorial [in Berlin] was finished and dedicated in 2005 it was applauded for its power. But in recent years, opinion has shifted. Many Germans think it may be altogether too powerful. They have begun to believe they have been shamed enough by Germany’s horrendous genocide. They want to move on. … Thinking about the past, they want to consider more than the 12 years of Hitler.

Yet paradoxically, the subject of Hitler has become popular once again. Mein Kampf has become a bestseller. Since its release in January of last year, 85,000 copies have sold! Is that cause for concern? Is Germany prepared to repeat its history?

Bible prophecy has a lot to say about this coming German-led Europe. What is rising now in Europe will be the seventh and final resurrection of the Holy Roman Empire. If people would understand basic facts—like those Niklas Frank is pointing out—they could understand what the Bible prophesies for Europe’s future.

History repeats itself. But take heart, this IS the last resurrection. There won’t be another one after this—because it leads right into the return of Jesus Christ.

Read my father’s latest article, “Germany and the Last Holy Roman Empire,” and request our free booklet Daniel Unlocks Revelation to understand how these recent unnerving stirrings in Germany will unfold.