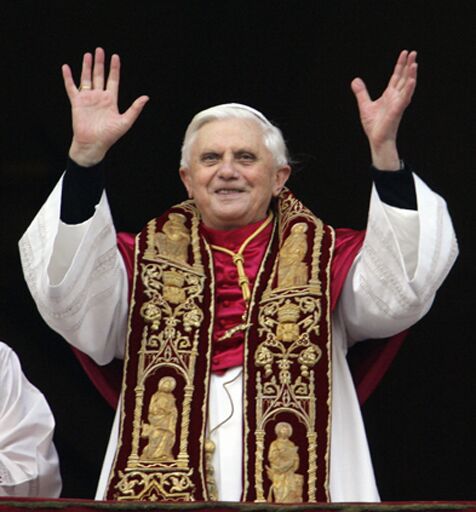 Pope Benedict XVI hasn’t wasted any time in delineating the fundamental issues of his papacy. The topic of a recent message by the pontiff identifies an issue which conjures images of chilling history and dreadful prophecies.

On Sunday, May 29, Pope Benedict xvi nailed his colors to the mast on a primary issue which he sees as fundamental to his papacy. At a mass celebrating the closing of the 24th National Eucharistic Congress, delivered before an audience of some 200,000 in the Italian city of Bari, Benedict declared that fundamental to his mission was the reinforcement of Sunday worship.

To students of history, this is chilling stuff. It bespeaks a return to the papacies of old, the papacies of that ever recurring imperial European power, the Holy Roman Empire. In declaring this basic tenet of his papal ideology, the pope is simply publicizing to the world that he is bent on a crusade to resurrect that ancient entity.

Pope Benedict perceives only too well the secularist moral vacuum which has plagued Europe since the time of the Enlightenment. He is simply intent on filling that vacuum—the old Roman way! That way was never sympathetic to a voluntary accession by the public to its tenets. Rather, as even a cursory study of history will reveal, it was imposed by force—force of arms! As Texas-based think tank Stratfor mused, “Europe, for geopolitical reasons, cannot be unified except beneath the heel of a conqueror” (June 2).

European unification, following the recent and resounding rejections of the European Constitution by both France and the Netherlands in the past week’s referenda, appears to be in disarray. But this pope’s dream is in concert with that of his predecessor, John Paul ii. It’s a vision that pictures a Europe united from the North Sea in the west to the Ural Mountains in the east.

It is a vision of continental proportions. The only times throughout history that vision has been fully realized has been when Rome imposed its religion as, to borrow a phrase from Karl Marx, “the opiate of the people.” With its plebeians thus drugged with a common religious ideology, the Roman Empire was able to hang together in repeated resurrections following Charlemagne’s “conversion” in the eighth century and wreak havoc on those who might deign to resist its will and whim.

Pope Benedict deeply understands the impact of the iconic on the masses. To this end he is committed to reinstating the active observance of the Roman Catholic Church’s chief icon—SUNDAY. He knows that to popularize religion in Europe he has to reintroduce a means of promoting what in marketing terms is known as brand loyalty. The most historic brand which the pope can offer to the people with which to identify in a common bond is the ancient day of worship, fashionable since Babylon, the old day of the sun—Sunday. Hence his forceful promotion of that old Roman brand in his mass at Bari.

Note the terms that Benedict used to motivate the people to return to this ancient Roman practice of Sunday worship: “Sunday, day of the Lord, is the propitious occasion to draw strength from him, who is the Lord of life. The Sunday precept, therefore, is not a simple duty imposed from outside. To participate in the Sunday celebration and to be nourished with the Eucharistic bread is a need of a Christian, who in this way can find the necessary energy for the journey [of life] to be undertaken. … We must rediscover the joy of the Christian Sunday.”

The pope concluded with this prayer: “May today’s Christians again become aware of the decisive importance of the Sunday celebration” (Zenit, Bari, Italy, May 29).

The intensity of the papal commitment to enforcing Sunday worship in Europe, however, was underlined in the pope’s statements as reported by one of Italy’s most popular conservative newspapers. It reported his words as follows: “We cannot live without Sunday. The religious holiday of obligation is not a task imposed from the outside, but a duty of the Christian.” Now that’s profound! That ought to send a chill up the spine of any real student of the history of the Holy Roman Empire. Sunday—we “cannot live without” it, it’s a “holiday ofobligation,” it’s a “Christian duty”!

The historic facts are that since Charlamagne, the observance of Sunday within Europe did actually become a matter of life or death. Many actually were put to the sword, burned at the stake, stretched to death on the rack, or met their end by some other horrible means at the hands of others who literally declared that citizens could not live without Sunday! These were those declared heretic by Rome, declared martyrs by historians such as the 16th century’s John Foxe.

Let us hope this pope, Benedict xvi, did not have this long and agonizing history in mind when he uttered that most unfortunate phrase, “We cannot live without Sunday!”

(In his booklet Who or What Is the Prophetic Beast?, Herbert W. Armstrong explained a chilling prophecy in the book of Revelation regarding Europe’s coming drive to enforce Sunday worship. The Philadelphia Church of God publishes this booklet and offers it freely to any who request it.)