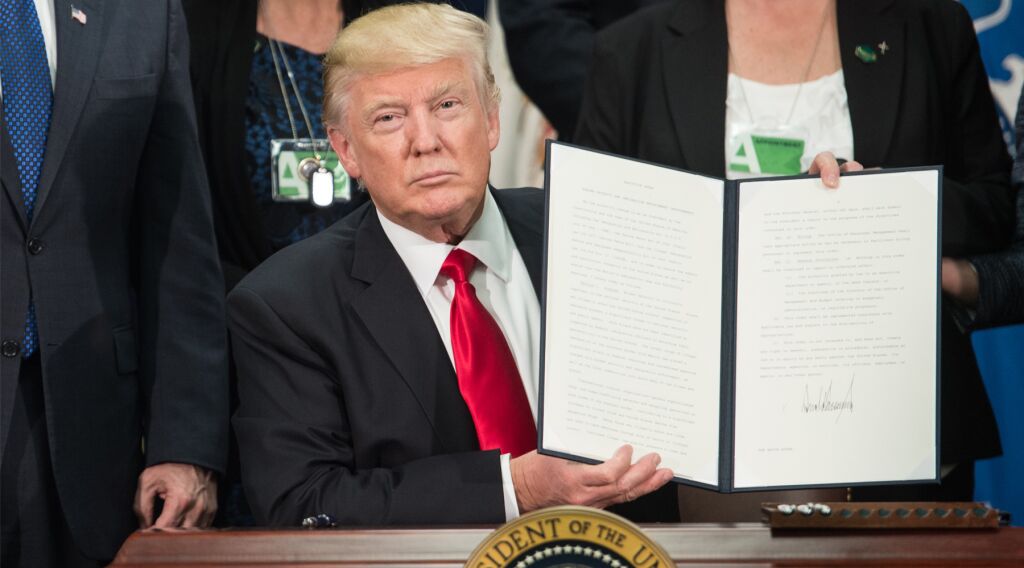 If United States President Donald Trump’s inauguration speech on January 20 was a pistol shot heard around the world, then the diplomatic spat with Mexican President Enrique Peña Nieto may foreshadow the first of many shootouts.

“We assembled here today are issuing a new decree to be heard in every city, in every foreign capital, and in every hall of power,” America’s new president told his citizens during his first presidential speech. “From this day forward, a new vision will govern our land.

The president continued: “Every decision on trade, on taxes, on immigration, on foreign affairs will be made to benefit American workers and American families. We must protect our borders from the ravages of other countries making our products, stealing our companies, and destroying our jobs. Protection will lead to great prosperity and strength. I will fight for you with every breath in my body, and I will never ever let you down” (emphasis added throughout).

In his speech, President Trump passionately identified problems: single mothers and children trapped in crime-ridden inner city poverty; an education system stuffed with money yet failing to educate; a broken economy that has left rusted out factories scattered like tombstones across America.

For many decades, we’ve enriched foreign industry at the expense of American industry …. And spent trillions and trillions of dollars overseas while America’s infrastructure has fallen into disrepair and decay. We’ve made other countries rich, while the wealth, strength and confidence of our country has dissipated over the horizon.One by one, the factories shuttered and left our shores, with not even a thought about the millions and millions of American workers that were left behind. The wealth of our middle class has been ripped from their homes and then redistributed all across the world.

Problems identified. But what about President Trump’s solutions?

“The U.S. has a 60 billion dollar trade deficit with Mexico. It has been a one-sided deal from the beginning of nafta with massive numbers …,” tweeted America’s president just days after his speech. “If Mexico is unwilling to pay for the badly needed wall, then it would be better to cancel the upcoming meeting,” he said.

It didn’t take long for President Nieto to respond.

“Mexico does not believe in walls. I’ve said time again; Mexico will not pay for any wall.”

So what are we left with?

A good-old-fashioned Mexican standoff. Trump has promised a wall—paid for by Mexico. And Mexico’s president has said there is absolutely no way that is going to happen.

Both men are squinting down the barrel of their six-shooters. Trump can’t put his gun down because it is a fight he has picked. And Nieto can’t holster his either because paying for the wall is simply unthinkable in Mexico.

President Trump doesn’t seem to view it that way though. Instead, his hand seems to be sliding toward his other holster. At a news conference on Friday, President Trump said Mexico “has outnegotiated us and beat us to a pulp through our past leaders. I’m not going to let that happen.” The wall is going up whether Mexico likes it or not. And Mexico will pay one way or the other. Options include prohibiting Mexicans living in the U.S. from sending money home (remittances are Mexico’s most important source of foreign income), or taxing it, or increasing tariffs on imports from Mexico, or canceling trade agreements altogether.

President Trump isn’t just bluffing either. Just three days after taking office, he cancelled America’s participation in the 12-nation Trans Pacific Partnership (tpp) trade agreement. “President Trump is committed to renegotiating nafta” too, says the White House website. “If our partners refuse a renegotiation that gives American workers a fair deal, then the president will give notice of the United States’ intent to withdraw from nafta.”

The president has also bulled his way into European trade politics. On June 28, 2016, he told British Prime Minister Theresa May that Britain’s decision to leave the European Union will be a “wonderful thing” and offered her a desperately needed fast-track trade deal. As Richard Palmer reported on Tuesday (“Germany Sees Donald Trump as an Enemy”), this angered many European bureaucrats—and in particular, Germany. In contrast, President Barack Obama did everything he could to keep the European Union together, including lending hundreds of billions of dollars to Europe during the 2008 financial crisis. Regarding Britain, President Obama warned that if it left the Union, it would have to get to the back of the queue of nations wanting to trade with America.

President Trump is far less accommodating to Europe. Just days into his presidency, he put a handgun to the temple of German vehicle manufacturer bmw. Cars imported to the U.S. from any new factory in Mexico would be pistol-whipped with a 35 percent tax.

Then he told two European papers: “The EU was formed, partially, to beat the United States on trade, OK? I don’t really care whether it’s separate or together.”

Yes, the president better have a lot of guns in his waistband and a knife or two as well, if he keeps picking fights the way he has.

As Charles Krauthammer noted on January 20, the president’s inauguration speech is not going overlooked around the world. “And I guarantee you that they are quaking in their boots in foreign capitals, particularly of our allies and trading partners,” he said.

The way that Trump spoke about the outside world was the most aggressive, most hyper-nationalist, and in some ways most hostile of any inaugural address I think since the Second World War. What Trump pointed out, what he drew was a picture of a zero-sum world where what we done for the world, they have been stealing from us.

“We’ve always said that America is our best friend,” Jeroen Dijsselbloem, president of the association of European finance ministers, told The New York Times. “If that’s no longer the case, if that’s what we need to understand from Donald Trump, then of course Europe will look for new friends.”

“China is a very strong candidate for that,” he added.

And with Donald Trump so openly critical of nato, expect the Europeans to start looking to defend themselves once again—economically and otherwise. Nato is “obsolete,” says Mr. Trump.

The post-World War ii order is ending. There is a new American sheriff in town. And judging by the gunslingers he’s recruiting, he has something big planned.

Robert Lighthizer is America’s new tough trade negotiator. Lighthizer worked under President Ronald Reagan to reduce America’s trade deficit. He did that by shooting holes in the dollar to make Japanese and German imports more expensive.

Then there is Peter Navarro, who Mr. Trump appointed to lead a completely new White House office overseeing American trade and industrial policy. On January 31, he called out Germany for suppressing the value of the euro to “exploit” the U.S. and the rest of the eurozone. He also accused “cheating China” of destroying U.S. manufacturing by flooding the country with “contaminated, defective and cancerous” goods. Navarro wrote the books The Coming China Wars and Death by China.

And don’t forget Wilbur Ross the new commerce secretary, who some say is more of a corporate bandit. The successful billionaire may be best known for making a fortune when steep tariffs on Chinese steel made his American mills and coal assets more competitive. It will be his job to coordinate trade policy.

So pity the poor foreigners that President Trump says has been taking advantage of America. A new vision governs the land: walls, barriers, protectionism, nationalism, trade tariffs and American jobs.

President Trump has correctly identified many of the problems plaguing America. Working to keep jobs in America is a good thing. Fixing the problem requires addressing why so many companies want to move out of America in the first place. President Trump’s plan to reduce burdensome government and simplify regulations is a positive step in that direction. That will reduce the cost of doing business in America and create more jobs.

But the reality is that there are a whole host of other factors making U.S. businesses less competitive. And unless those causes are addressed, American workers will continue to suffer.

This is something Herbert W. Armstrong was warning about as far back as the 1970s. In a 1971 Plain Truth magazine, he wrote about how American workers were the richest in the world, but were shooting themselves in the foot.

When American workers are trying to get all they can get—and at the same time giving as little as they can get away with—even to giving nothing … and Japanese and German workers, in their national interest, are working for half the wages or less, and working with the fervor of loyalty and patriotism, it means we are headed one of two ways:Either we start raising high tariff barriers against other countries, starting a trade war which in time will trigger the nuclear war that will destroy us—or, American workers are going to have to meet the competition of the workers in other countries, by lowering living standards. Obviously American workers are not going to choose to do the latter.And if they don’t—well, the handwriting is on the wall.

President Trump’s America is moving toward trade confrontation instead of trade cooperation—and that is a huge step in the wrong direction.

No one wins a trade war. Some lose less than others, but everyone still loses. It is kind of like a Mexican standoff gone bad. After the gun smoke clears, even if you are the last man standing, a lot of the blood on the floor is still yours.

In a world with nuclear weapons, no one will be left standing.

For information on what the Bible says about trade wars impacting America and Britain and where it will lead, read “Trade War and America’s Collapse”