What will happen to America’s debt-burdened economy under Donald Trump? 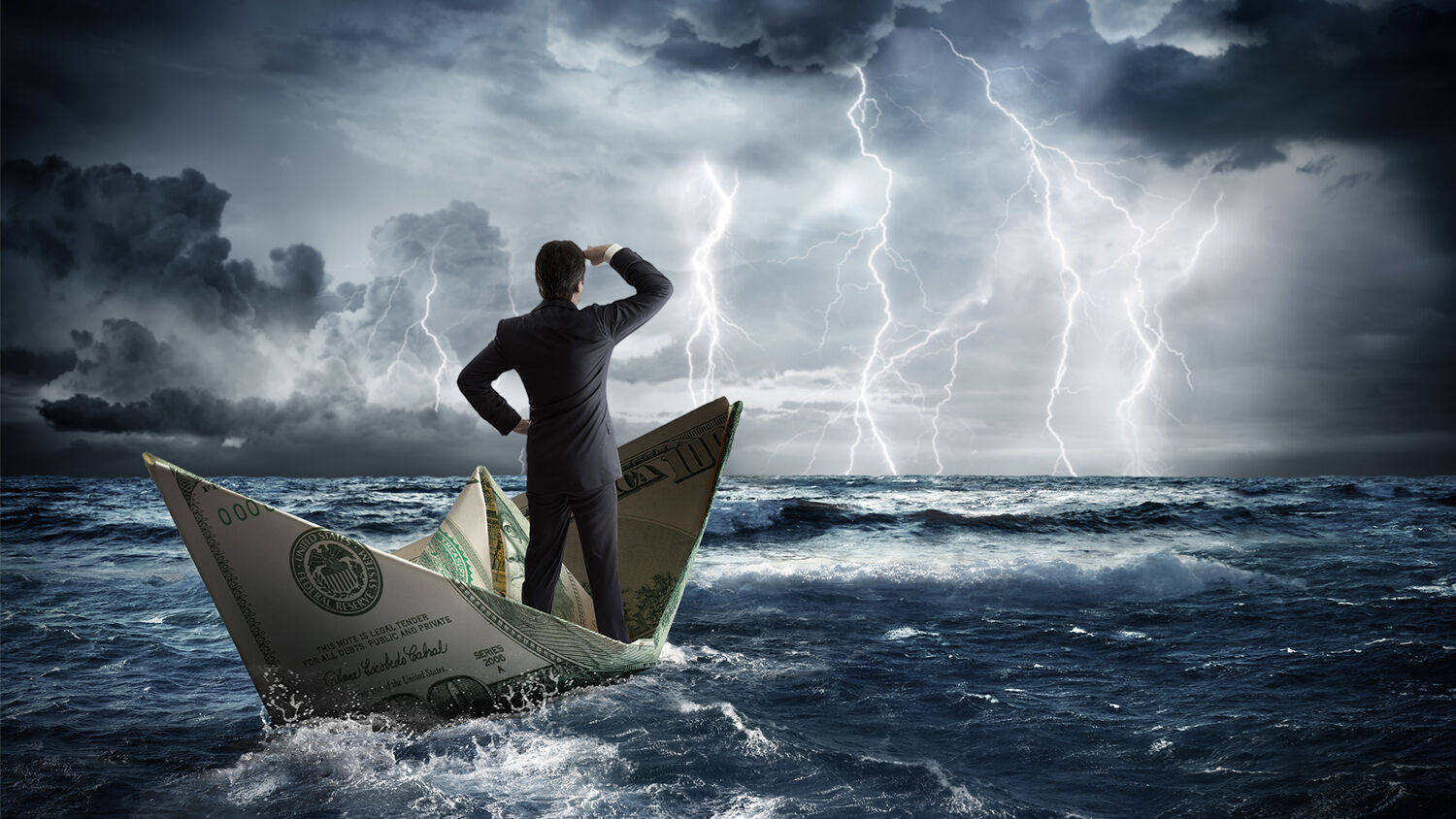 What will happen to America’s debt-burdened economy under Donald Trump?

There is a storm building. Not of winds or waves, but of money and debt. The United States is the cumulonimbus of pitch-black, rumbling debt: $20 trillion in federal debt, and accumulating $3 billion more every day.

The U.S. will now be led by a man who has a lot of experience with debt—although you might be surprised to hear that he personally doesn’t owe a cent. But don’t be fooled: Companies that he owns do. According to a New York Times investigation, Trump-owned companies probably owe upwards of $650 million. But Donald Trump is also part owner in many businesses, such as an office building on Avenue of the Americas in Manhattan, which carries a $950 million loan from the Bank of China. Some of that debt is technically Trump’s too.

Federal debt is now more than $61,000 per citizen: $61,000 for each mother, father, baby, grandmother, unemployed uncle, credit-card-happy neighbor and welfare cousin in America. Most Americans simply cannot contribute much of anything to pay down this debt. Bankrate.com says 56 percent of working-age Americans can’t even come up with a thousand dollars cash in an emergency.

Debt Is the Same as What?

Don’t blow this out of proportion, you gloom and doomsayer. Debt is not a threat, it’s a tool. Forbes explained on Jan. 14, 2016: “The correct conclusion to draw is that these people are indeed middle class in a country with a well-functioning financial system. Because of this they don’t need savings because they have access to credit” (emphasis added throughout).

You can be part of the middle class without even a thousand dollars to your name, as long as you can accumulate debt!

“[I]f we’re honest about it, credit and savings are economically the same thing,” wrote Forbes. “That most Americans don’t have $500 or so of ‘savings’ as conventionally defined simply doesn’t matter.”

Credit is really the same as savings. That is being “honest about it.” “[A]s ever in the study of things economic, it is consumption which is the important point of it all” (ibid).

There you have it! Why sacrifice, wait and save to build an emergency fund, or to buy your car, or to pay for your college when, functionally speaking, the result is supposedly the same as using an American Express card? It doesn’t really matter how you pay for it—all that really counts is the ability to consume.

The Bush administration accumulated $4.9 trillion in debt. The Obama administration accrued $9.3 trillion. Federal government debt has reached almost $20 trillion and now approximates the total value of every single company listed on the New York Stock Exchange, the biggest stock exchange in the world.

Will the Trump administration reverse that trend? Will the growing debt storm calm or at least level off during his presidency?

In the real world beyond Washington, credit is not the same as saving, and debts cannot be perpetually paid for by swapping credit cards. Analyst Wolf Richter wrote, “So now we’re burdened with such an enormous amount of debt that I think it is very hard to even breathe for the economy. A lot of people out there are worried about this” (PeakProsperity.com, Oct. 16, 2016).

Yet America’s leaders are still trying to solve the too-much-debt problem with more debt. Richter wrote, “I mean, the Fed is still saying, We will make money for free and you just need to borrow more money, and that’s its solution to having too much debt. It’s insane when you look at it.”

America’s federal debt works out to more than $166,000 per income-tax-paying citizen.

There is another $3 trillion in state and local debt that must eventually be paid too. That’s an additional $25,000 owed per taxpayer. But Americans have no savings. They do, however, have a lot of something else: debt! Vortex in personal and corporate debt, and the U.S. debt rotation is $67 trillion. And none of this includes the promised benefits to future generations of Medicare and Medicaid recipients.

Depending on how you calculate it, America has liabilities of greater than $100 trillion. Boston University’s Laurence Kotlikoff says it is closer to $200 trillion.

That’s a potential debt storm so big it is virtually impossible to fathom. Forget those promises made because they won’t be paid. Not in full. That in itself is going to hurt a lot of people who are relying on the government for shelter during retirement.

But even the part of the debt that analysts think the government could pay is quickly blowing past America’s ability to sustain it. The total size of the U.S. economy is under $18 trillion, which equates to a government debt-to-gdp ratio of over 110 percent. That is up from 100 percent of gross domestic product in 2011.

Does that mean politicians will come to their senses? That the debt storm will abate?

In fact, the debt storm will probably intensify before making landfall. Total U.S. household debt hit a whopping $12.25 trillion last March, but that is still 3.3 percent below the peak that preceded the 2008 subprime mortgage crisis. It has room to run. Student loan, auto and recent credit card debt are growing. Call them the 3-trillion-dollar triple-threat.

What President Trump Will Do

America’s leaders think debt is good. On December 14, the Federal Reserve raised interest rates a quarter of a point from 0.5 to 0.75, only the second minuscule increase in over 10 years. The Fed’s unstated purpose is to support consumer spending. That’s why it is keeping interest rates ridiculously low: to encourage continued borrowing?

President Trump has been seen as a disruptive figure. Will he disrupt this spinning vortex of indebtedness?

Donald Trump loves debt—he admits it! He said on cnbc May 5, 2016: “Yeah, I think—look. I have borrowed, knowing that you can pay back with discounts. And I have done very well with debt. Now, of course, I was swashbuckling, and it did well for me and it was good for me and all that. And you know, debt was sort of always interesting to me. Now we’re in a different situation with the country. But I would borrow, knowing that if the economy crashed, you could make a deal. And if the economy was good, it was good. So, therefore, you can’t lose. It’s like, you know, you make a deal before you go into a poker game, and your odds are so much better.”

He told cbs This Morning in an interview on June 22, 2016: “I’m the king of debt. I’m great with debt; nobody knows debt better than me. I’ve made a fortune by using debt, and if things don’t work out, I renegotiate the debt. I mean, that’s a smart thing, not a stupid thing.”

And what if America borrows more than it can handle? Mr. Trump has that inevitability covered too: “You go back and you say, ‘Hey, guess what? The economy just crashed. I’m gonna give you back half’” (ibid).

Those estimates will rise. If there is one thing America has proven in recent history, it is that it knows how to underestimate spending.

And while America embarks on its greatest debt binge ever, a storm of epic proportions will be developing offshore. On land, all may appear sunny and tranquil. Debt will buoy the stock market; consumption will give the appearance of prosperity; temporary jobs will be created.

And then one day the storm will roll in. Suddenly the skies will darken. The wind will blow. The rain will fall. And a tidal surge of epic proportions will wipe America’s debt-based economic system right off the map.

Until then, you have a choice. Join the majority of Americans who build their financial houses on sand. Or build upon a sure Rock foundation. Begin by reading Solve Your Money Troubles!