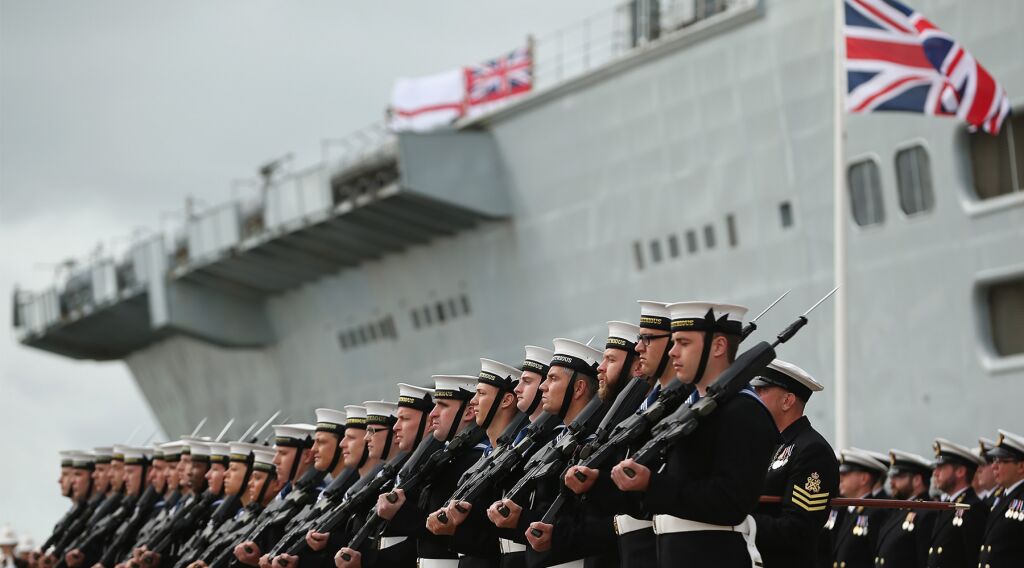 The navy that brought us aircraft carriers with no planes is about to reach a new level of ridiculousness. The Royal Navy is about to become the navy with no missiles—meaning it could soon be beaten by every significant navy on the planet, and perhaps even by ships 100 years old.

The Ministry of Defense recently admitted that the British Navy would be withdrawing its harpoon antiship missile in 2018—and it has no replacement lined up.

A navy with no missiles is every bit as useless at it sounds. The Navy’s other antiship missile, the helicopter-launched Sea Skua missiles, will be leaving service next year. Without these, the British Navy will be left with only 4.5-inch guns to attack other ships.

Harpoon missiles have a range of 80 miles; the guns have a range of only 17. Warships would still have modern defense capabilities, such as air defense missiles, but other ships would be able to attack Britain’s warships long before the Royal Navy’s guns could get in range.

The Register noted that in the late 19th century, Royal Navy (RN) ships had bigger guns than those in use now: “[A]fter 2018, the RN’s front-line warships would be hopelessly outgunned by century-old designs.”

“British naval credibility will vanish down the toilet—and in the modern world where actually firing at another state’s ship could provoke a full-blown war, it is credibility and implied threat that matters most,” it wrote.

“Not only does the Royal Navy find itself with a historic low of 17 usable frigates and destroyers,” said Douglas Chapman, an M.P. for the Scottish National Party, “we now find that these warships will be left defenseless in a way that surely no other major modern navy would consider acceptable.”

“Until the antiship missile issue is fixed, one of the finest navies in the world will be at a critical disadvantage,” wrote Popular Mechanics. “Against any competent navy in a ship vs. ship fight, the Royal Navy is in for a humiliating defeat.” Naval sources told the Telegraph that the decision was “like Nelson deciding to get rid of his cannons and go back to muskets.”

Of course, if a war did break out in 2018, British ships would probably be able to sail back to port and be refitted with the harpoon missiles. But that’s still a huge decrease in the prestige and readiness of the Navy—rendering Britain’s front line of national defense horribly vulnerable.

Britain’s Type-23 frigates carry helicopter-launched Sea Venom missiles, however, these won’t reach “initial operating capability” until 2020. The Sea Venoms have a shorter range than most other antiship missiles, and their use is limited because helicopters cannot be launched in heavy weather.

The decision to remove the harpoon antiship missile is just another sign of widespread problems in the Navy. Huge cutbacks have forced the Navy to make these moves. The blog Think Defence noted that the Navy’s current missiles “are often considered to be obsolete in a contemporary operating environment” because they don’t have precision guidance. Upgrading to modern weaponry is apparently more than Britain can afford.

Ars Technica noted “If the Royal Navy is facing budget cuts, it may have simply been a case of choosing to spend what money it does have on keeping the UK’s ever shrinking fleet afloat, rather than equipping ships with rarely used and very expensive missiles. Being completely unable to engage other navies for at least a few years must be a pretty bitter pill to swallow, though.”

These wider problems and cuts led Foreign Policy to ask, in its headline published November 21, “Is the Sun Setting on the Royal Navy?” That day, Britain’s Parliamentary Defense Select Committee published a report on the Navy lamenting the “woefully low” number of ships.

“For decades, the numbers of Royal Navy escort vessels have been severely in decline,” said committee chairman Dr. Julian Lewis.

“The current total of 19 frigates and destroyers—only 17 of which are usable—is already insufficient,” the committee concluded. “To go below that number, even for a transitional period, would be completely unacceptable.”

On November 29, Sir John Parker, chairman of mining conglomerate Anglo American, published his report on Britain’s shipbuilding strategy. He warned that Britain was keeping ships in its Navy “well beyond their sell-by date.” These aging ships are expensive to maintain, making less money available to build new ships, leading to a “vicious cycle” that wastes money and makes the Navy weaker.

One of the Navy’s most high-tech destroyers, the Type-45, has been plagued with problems; it is unable to operate long term in warm seas and in need of a major overhaul.

In 2017 War With Russia, former nato deputy commander of allied forces in Europe Gen. Sir Richard Shirreff wrote that the huge cuts to Britain’s military mean that the nation is now “little different from any other semi-pacifist, European social democracy; more interested in protecting welfare and benefits than maintaining adequate defenses.”

Britain’s cuts in 2010 “emasculated British military capability,” he warned. “The consequences are far-reaching and difficult, if not near impossible, to reverse.”

“It would be difficult to overstate the disbelief of our allies or delight of our enemies” at cuts to Britain’s Navy and Air Force, he wrote.

The cuts this island nation is making to its Navy—the force it has relied on for its defense for centuries—are all but unbelievable. But the Bible describes modern Britain following exactly this path. Hosea 7:11 says that Britain (biblical “Ephraim”—for proof of this, read our free book The United States and Britain in Prophecy) is “a silly dove, without sense.”

“Silly means simple, easily fooled,” wrote Trumpet managing editor Joel Hilliker. “And the dove perfectly symbolizes the senseless, toothless and naive nation Britain has become.” Is there a better way of describing what Britain has done to its military?

Hosea 7:11 says that these “silly dove” decisions will leave Britain looking to Assyria (modern Germany) for its defense. It’s easy to see how these defense cuts could result in Britain looking to Europe, led by Germany, for its safety.

The United States and Britain in Prophecy, Herbert W. Armstrong’s most requested book, was sent to more than 6 million people. What he wrote in this book is being proved more right by the day. The Bible explains Britain’s almost unexplainable decisions—like disarming its own Navy—better than any other source. For more on what this reliable forecast says is ahead for Britain, read our free book The United States and Britain in Prophecy.