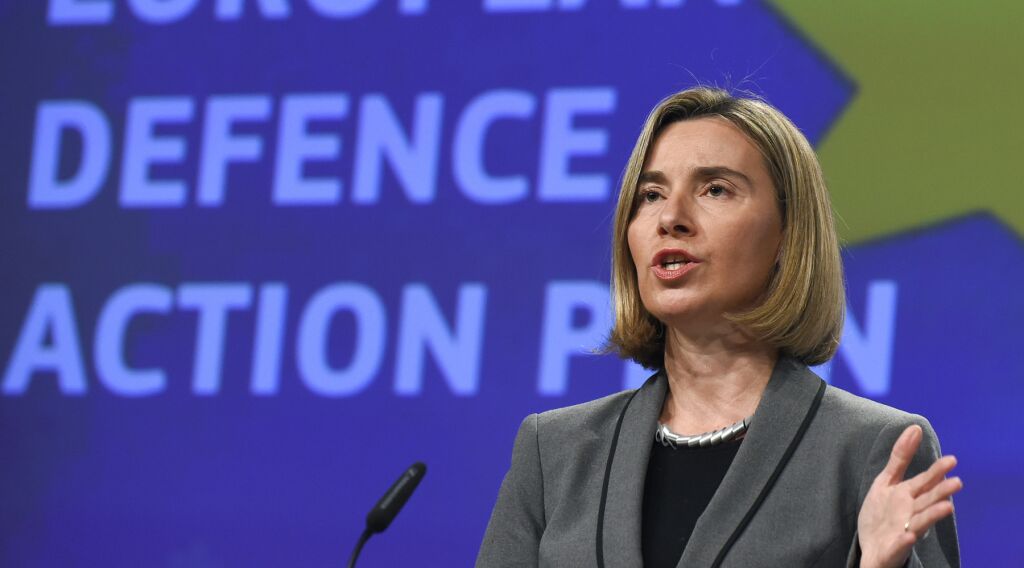 EU leaders say Europe needs a defense union so it can be a ‘superpower.’

Nations in the European Union have often talked about working together on defense. Many pro-EU politicians wanted some form of an EU army. But in terms of having actual, practical plans, they have had little success—until now.

What they outlined was not a plan for an EU army, but specific, practical steps designed to start Europe down that road.

EU foreign policy chief Federica Mogherini said the previous week that “we can only succeed in providing security to our citizens if we work together as a true Union, with the full potential of a superpower, in the field of security and defense” (emphasis added throughout).

“It’s more than just ‘blah, blah, blah,’” an unnamed EU diplomat said, according to the EU Observer. “There’s a new level of political ambition and a document with concrete tasks and a detailed timetable for implementation.”

The EU will now create a limited military headquarters. It will command training missions and logistics, but military missions will still be run by national governments. Italian Foreign Minister Paolo Gentiloni said that this was “not yet a European general staff”—but it was intended to become one. They will also establish a European Medical Command.

The ministers also agreed that the EU needed its own joint military forces that could be sent to “situations of high security risk in the regions surrounding the EU.”

“EU battle groups have existed for 10 years but have never seen action, in part, because participating states never wanted to foot the bill,” wrote the EU Observer. The ministers took some major steps toward changing that.

Under the new plan, these groups will be funded from the EU’s budget. The ministers also agreed that EU nations should not be penalized as firmly if extra defense spending takes them into debt. Once implemented, the battle groups would attract other nations to help pay for military missions.

The agreement also paves the way for greater EU cooperation on developing weapons, such as combat drones.

The ministers also agreed to examine the use of “permanent structured cooperation.” This is a provision in EU treaties that allows a smaller group of nations to move forward with a project, without the rest of the Union. So far, it has been used only in relatively minor areas, such as simplifying divorce proceedings or patent law. If the EU moves ahead with this, it will be a significant step to a so-called “two-speed” Europe, where a smaller group of nations moves rapidly toward becoming a superstate, leaving the rest behind.

In the meantime, the plans EU leaders are moving forward with have met little opposition. “Even London, after years of opposing any plan to strengthen EU defense for fear of weakening nato, said it did not oppose the plan,” noted Politico.

“The decisions taken by the EU defense ministers at their meeting ending yesterday largely meet the demands for the enhanced EU military cooperation that Berlin, for years, has been pushing for, particularly since last summer,” wrote German-Foreign-Policy.com. It concluded the article by noting:

Mogherini and [Luxembourg Foreign Minister Jean] Asselborn are picking up the cues that had been openly discussed in German think tanks more than a decade ago. The struggle to implement the concept of a “superpower EU,” until now, has been hampered by the numerous internal contradictions within the alliance. This process could now be entering its decisive phase.

Meanwhile, United States President-elect Donald Trump looms over everything EU leaders are doing. This meeting and its conclusions were planned before the U.S. elections. Now that Mr. Trump has been elected, America’s commitment to Europe’s defense has been thrown into question.

German Defense Minister Ursula von der Leyen has been one of the loudest voices calling for Europe and Germany need to do more now that Mr. Trump is headed for the White House. “Europe has to prepare for the fact that it must provide for itself,” she said, noting that that would mean spending more money on defense.

President of the European Commission Jean-Claude Juncker also renewed calls for setting up a separate army for the European Continent just hours after Donald Trump was elected.

This is one of the main events the Trumpet has been watching for the past few decades. In 1978, Herbert W. Armstrong wrote:

The Europeans are far more disturbed about their safety in relying on United States military power to protect them than Americans realize! The United States is not loved in Europe. European confidence in U.S. protection against their next-door Communist neighbor has been lessening and lessening.

European leaders today are using this exact language. “Trump knows that the EU has the money, technology and know-how to be a global power equal to the U.S., and it is not his problem that Europe lacks the political will to harness its full potential,” wrote Guy Verhofstadt, leader of the Alliance of Liberals and Democrats for Europe group in the European Parliament. “We Europeans have assumed for too long that it is cheaper and safer to let the U.S. solve our problems, even in our own backyard. With Trump’s election (and given America’s checkered foreign-policy legacy), we must discard this belief.”

For more on what is coming and how Herbert W. Armstrong was able to make this prediction, read our article “Is Europe Finally Ready for an Army?”