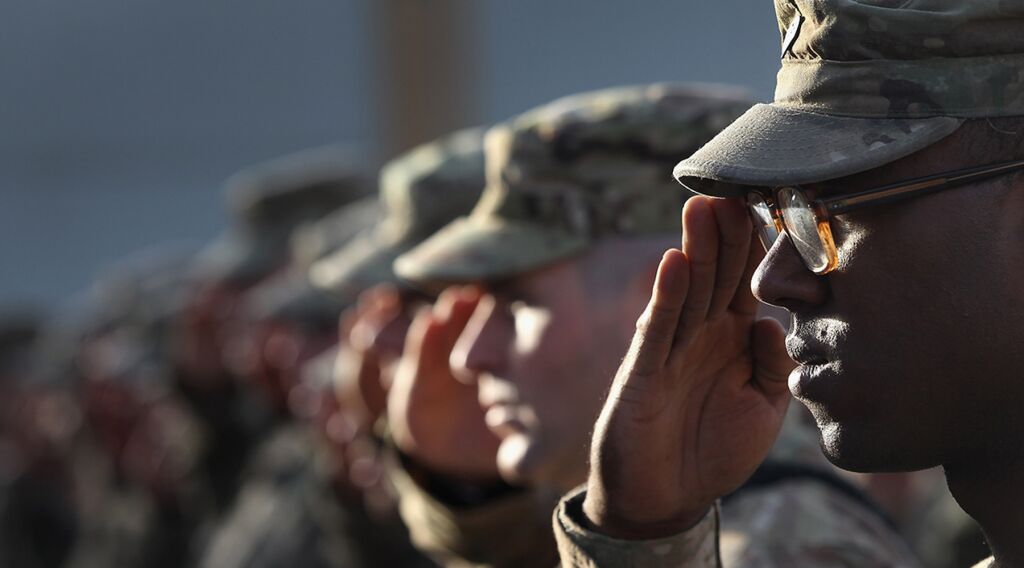 Donald Trump’s plan is both hazy and dangerous.

Donald Trump’s electoral victory brought hope to many conservatives and military leaders. “More than one person has compared it to the day Osama [bin Laden] was killed,” one Army officer told the Washington Post. “I guess there’s a feeling among soldiers that Trump will care about them and fix everything they see as broken about the Army.”

A simple review of the recent history of the United States military reveals why so many soldiers feel that the military is broken. Hampered by a sequestration imposed in 2013, the military has faced serious cutbacks in funding. Since that time, there have been few developments to celebrate. In late 2012, the U.S. Navy downsized to only 10 aircraft carriers. Federal law requires the Navy to have no less than 11 operational aircraft carriers, but the current administration has simply ignored that law. In March 2016, the U.S. Army shrunk to the smallest it has been since before World War ii. The U.S. Air Force is reportedly 4,000 airmen short to maintain its fleets and 700 pilots short to fly them. Then there are the numerous reports of worn-out military equipment, reduced flight hours, and extended deployments.

Added to that, the U.S. has spent the past eight years backing away from global leadership. President Barack Obama has repeatedly undermined the United States’ status and power abroad. Instead of viewing America as a power to lead and maintain world order—both through its military and diplomatic power—the president’s stated interests were in “recognizing the value and wonderful qualities of other countries, … recognizing that [America is] not always going to be right, … that other people may have good ideas, [and] that in order for us to work collectively, all parties have to compromise and that includes us.”

After eight years of compromising on America’s core principles and objectives abroad, it’s little wonder so many in the military see President-elect Trump as the one to make America great again. He has repeatedly voiced his desire to beef up all branches of the military and send a message to the world that America won’t be pushed around anymore. Tough talk against China, Iran and the Islamic State certainly makes him look like a hawk. A closer examination of his statements about the military, however, reveals a contradictory view of America’s place in the world. They signal a dangerous shift in the world order.

Throughout the campaign, Trump established himself as the candidate who would expand the military and reestablish America’s prestige in the world. One of his most notable promises was to expand the U.S. Navy from 272 ships to 350. This incredible expansion would be favored by many military commentators. Right now the Navy is overworked, with deployment times getting longer and longer due to a lack of ships. More ships would greatly reduce the stress on the sailors and the equipment.

Mr. Trump also favors expanding the Army to 540,000 troops. Under the current sequester, the Army is slated to downsize to 450,000 troops by 2018, but Mr. Trump says he will reverse that. He plans to expand the Marine Corps from 24 infantry battalions to 36, end the sequester, and create a new state-of-the-art missile system.

There’s no doubt such a buildup would greatly increase America’s ability to project power around the world. Additional men and material would reinforce its status as the world’s lone superpower, and undo many years of retreat.

Strengthening America’s military would be a great benefit to the world—America has been a force for good in many ways. But can the U.S. afford such a buildup?

The U.S. currently carries a debt exceeding $19.9 trillion. If Mr. Trump were to implement his defense policies, it would add an extra $55 to $60 billion a year, and that is just for “the meat and potatoes of a military buildup” as one source put it. A full implementation would add tens of billions of dollars on top of that. Mr. Trump has promised cuts in other areas of government that he believes would help offset these costs. However, research done by Cornerstone Marco indicated that during Mr. Trump’s first term, deficit spending could rise to 6.8 percent under Mr. Trump’s tax plan.

Aside from the cost aspect, Mr. Trump’s view of America’s place in the world, together with its military, is what’s most confusing.

But what benefit is a bigger military if you don’t intend to use it as a force for good as America has done for decades? Pax Americana exists because the U.S. has been willing to get involved in world affairs.

Mr. Trump has stated that America cannot be the policeman of the world indefinitely. Rather than reassure the world that America will still try to be the guarantor of world peace, he has criticized America’s strategic partners for not “paying their bills”. He has hinted at even removing American troops from some of the most volatile regions of the world. His words have largely alienated these partners already, and he hasn’t even taken office yet.

This is his reasoning for pulling out of nations like Japan, South Korea and Germany if they don’t agree to take on a greater share of the costs. America doesn’t have the money to maintain foreign bases, he says, but apparently it does have the money to increase military spending in America.

Already, the Trumpet has reported on the consequences of America’s withdrawal from the world. Europe is defenseless against Russia without the U.S., so Trump’s election led the European Union to speed up the process of creating a unified European army. Without American backing, Southeast Asia would be unable to defend itself against Chinese expansionism. These massive geopolitical shifts do not seem to concern Mr. Trump, even though the savings to America would be minimal at best.

Is it worth disengaging from these crucial regions to save only a couple billion dollars a year? Mr. Trump doesn’t seem to have a problem increasing defense spending by tens of billions of dollars, as long as it’s being spent on America. But spending that money to defend other nations is unacceptable to him.

Mr. Trump’s “America first” policy reveals a muddled approach to foreign policy that will lead to disaster. A stronger military, gained through more deficit spending, is of no value if it just sits in America. Many are worried that his policies will lead to American isolationism. Mr. Trump may see strength in that. After all, the strategy worked in the early 1900s, for the most part. But in the 21st century—with intercontinental ballistic missiles, nuclear submarines, long-range bombers and cyberwarfare—isolation from the rest of the world no longer guarantees safety and protection.

Mr. Trump reasons that a stronger military will deter people from attacking America. But what if American disengagement leads to a geopolitical shift that causes Europe or Asia to become more powerful than the U.S.? Many would say that’s impossible, but that is what Bible prophecy says is coming. A united European power is coming that will stagger the world.

In “Where Does the U.S. Go From Here,” Herbert W. Armstrong wrote in the April 1980 Plain Truth:

You may be sure the West European leaders are conferring hurriedly and secretly about how and how soon they may unite and provide a united European military force so they can defend themselves! And so they will no longer have to give in meekly to Russia! And who will they blame for their humiliation and their necessity now to have a united Europe, with a united government, a common currency, and a common military force as great or greater than either the ussr or the U.S.A.? They will blame the United States!And when they are strong enough to assert themselves, … [they] will first attack Britain for standing firm with the United States, and then they will return a lot of hydrogen bombs the U.S. has stored now in Europe!

That was written 36 years ago! Does it seem too far-fetched to happen? Already Europe feels abandoned by America and is pushing to develop its own united military and nuclear umbrella. Commentators are now saying that Germany is the new defender of Western values; America’s time is over. The dawn of Pax Germanica is here, reported Foreign Policy magazine. A major shift in the world order is already taking shape. America has already suffered an incredible erosion of power and influence in the world, and it has only lost more since Donald Trump’s election. Nations in Europe and Asia are already rising to take America’s place.

These are all troubling developments when you understand Bible prophecy. Mr. Trump’s plans to expand the military are not going to make America stronger; whether they even materialize remains to be seen. The Trumpet has repeatedly pointed to a prophecy in Leviticus 26:19 where God says that He would break the pride of our power. Donald Trump will not be able to turn that around, even with billions of more dollars in defense spending.

However, Bible prophecy does reveal that America will be great again. This is explained in editor in chief Gerald Flurry’s new booklet Great Again. If you haven’t requested a copy, be sure to do so. There is hope in America’s end, but there are also terrifying times ahead. You can’t afford to ignore this warning.