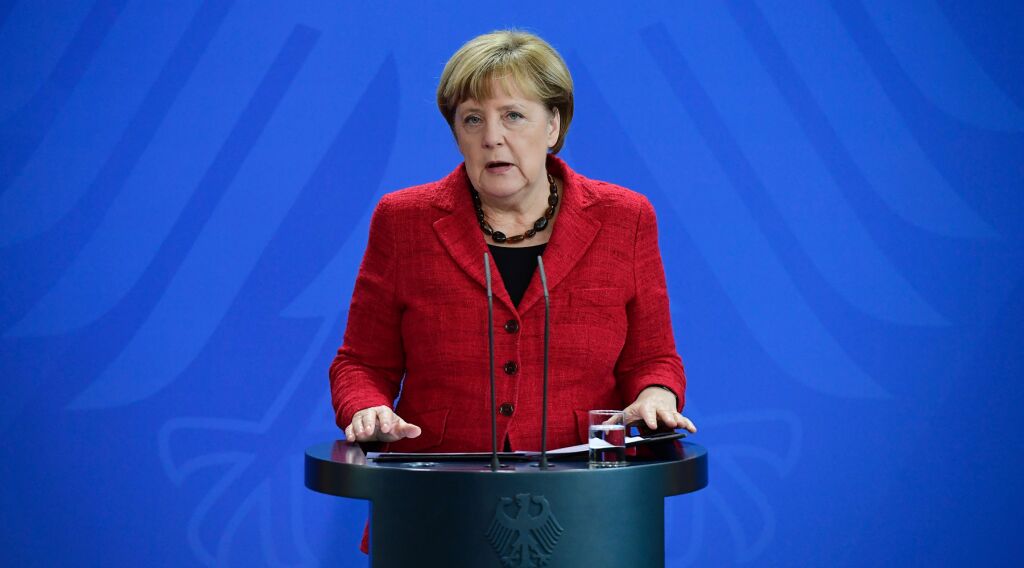 The election of Donald Trump heralds a major split between Europe and the United States.

European leaders are not Donald Trump fans. So much so that across the Continent, they broke with protocol and involved themselves in another nation’s election. Throughout America’s presidential campaign, they openly condemned Mr. Trump.

Democratic candidate Hillary Clinton, on the other hand, they love. European leaders awarded her husband the Charlemagne Prize for his contribution to European unity. The two Clintons were both strong supporters of nato’s breakup of Yugoslavia—one of the uses for nato strongly approved by Germany and others. Europe’s elite were clearly rooting for a Clinton victory.

“On the basis of these values, I offer the future president of the United States of America, Donald Trump, close cooperation,” she said.

We hope that we are not facing greater instability in international politics. During his campaign, Trump was critical not just of Europe, but also of Germany. I believe we must prepare for American foreign policy becoming less predictable. We must prepare for a situation in which America will be tempted to make decisions on its own more often.I don’t want to sugarcoat it: Nothing will be easier and much will be more difficult.

Vice Chancellor Sigmar Gabriel warned: “Trump is a warning to us as well. He is the harbinger of a new authoritarian and chauvinistic international movement.”

Justice Minister Heiko Maas was even blunter: “The world won’t end. It will only get crazier.”

The chairman of Germany’s parliamentary committee for foreign policy, Norbert Röttgen, said Mr. Trump was “completely inadequate” to be president. “That Trump’s election could lead to the worst estrangement between America and Europe since the Vietnam War would be the least of the damage,” he said.

European officials also made their displeasure clear. “I’m not happy about it,” President of the European Parliament Martin Schulz said. “But on the other hand, I also believe that the political system in the U.S. is strong enough to be able to deal with a president like Trump.”

Europe’s leaders fear that America’s foreign policy could change radically under President Trump, leaving Europe in a precarious situation. “Americans didn’t just choose a divisive new president-elect on Tuesday, they voted out the old world order,” wrote Mark Mackinnon, reporting from London for the Globe and Mail. “The certainties that underpin our current global system—the one in place since the end of the Second World War—are no longer guaranteed after the electoral earthquake in the United States.”

“He’s totally unpredictable,” said András Simonyi, former Hungarian ambassador to the U.S. and expert on transatlantic relations at John Hopkins University. “He has zero experience in foreign policy and we don’t know who he’s listening to. I know several of his advisers, and I don’t know who he really listens to.”

The Wall Street Journal described the reason for the unease in an article titled “Trump’s Victory Shakes Europe’s Geopolitical Order”:

For the second time in less than five months, European leaders have woken up to a vote that has shaken the Continent’s geopolitical order.If anything, the election of Donald Trump was more shattering than Britain’s decision to leave the European Union.The votes in two of the world’s most open and market-oriented economies both suggested dissatisfaction with globalization and economic integration. Mr. Trump’s election has raised questions about whether the U.S. will continue to extend the unconditional security guarantee that has underpinned European prosperity since World War ii. …Another worry is that economic uncertainty generated by his election could threaten Europe’s still-faltering recovery ….

Meanwhile, Europe’s leaders are struggling to fend off their own “Trumps.” Populist upstarts across the Continent cheered Mr. Trump’s success and are more convinced than ever that they can emulate it in upcoming national elections.

The Wall Street Journal pointed out another problem:

In seeking to navigate relations with the new administration, European leaders face another challenge: They don’t know the president-elect or his entourage.They have been suspicious of his rhetoric and have held Mr. Trump at arm’s length during the campaign. Mr. Trump’s sudden emergence into the political arena also means he doesn’t have a team of well-known Republicans to whom they can reach out—though that may change as he builds a foreign-policy team.

Europe has relied on America for its protection since World War ii. The foundation of their security and prosperity is called into question at the same time that the eurozone seems to be falling apart. No wonder Europe’s leaders are panicking. And they are turning to Germany.

“With the U.S. election results, the pressure on Germany has increased dramatically,” freelance expert on international affairs Olaf Boehnke told the Local.

“There is a need of leadership, and if the U.S. will not be the leader for the time being, then everybody looks to other leading nations or those with the potential,” he said. “It is up to Merkel and to Berlin to step up at least for the European crowd and take on much more responsibility than she already has.”

One of the biggest ways Europe now looks to Germany for leadership is in the military.

German Defense Minister Ursula von der Leyen said that Mr. Trump’s victory was a “deep shock.” “Europe has to prepare for the fact that it must provide for itself,” she said—noting that that would mean spending more money on defense.

Germany-Foreign-Policy.com noted, “Demands from within Berlin’s foreign policy establishment that Germany enhance its position within the framework of the transatlantic alliance have become louder over the past few days and weeks”—even before Trump’s election.

The German Institute for International and Security Affairs (swp) warned that Europe was completely dependent on America regarding foreign policy. The government needs to “ponder the reaction, should U.S. behavior become counterproductive from a German perspective,” it wrote.

“Without the will to argue with the U.S. government, many options for gaining influence are excluded from the outset,” it wrote. Instead, “Germany and Europe should not leave stability policy proposals up the U.S.A.”

Long-time diplomat and chair of the Munich Security Conference Wolfgang Ischinger made a similar call in the latest issue of Internationale Politik. “We need … more urgency in the establishment and development of effective European defense structures,” he wrote.

President of the European Commission Jean-Claude Juncker also renewed calls for setting up a separate army for the European Continent just hours after Donald Trump was confirmed the winner. Juncker said that the EU cannot rely on America in the long run as Washington would not be able to ensure the security of Europeans.

Even before Mr. Trump’s election, von der Leyen called for the EU to step up its defense. “We have seen an enormous modernization drive by nato over the past three years because of the Kremlin’s behavior,” she told a Christian Democratic Union security conference.

If Europeans believe they cannot trust the U.S.-backed nato, they will probably build up their own EU equivalent.

This split between Europe and America is no mere knee-jerk reaction to possible Trump policies. Just calling the nato alliance into question has made Europe’s leaders realize that they cannot rely on America forever. It will push them to develop their own capabilities, regardless of whether Mr. Trump follows through on his campaign rhetoric.

But the split goes deeper. Most of Europe’s leaders could not imagine voting for someone like Mr. Trump in a million years. That nearly half of American voters would do so leaves them appalled not just at America, but at Americans. In many ways, Europe’s leaders have more in common with elites in America than they do with their own people. However, the general population, at least in Germany, agree with their leaders’ opinion on Mr. Trump. In a poll in July, a minuscule 6.3 percent said they liked the idea of a Trump presidency. Germany’s trust in America already took a major hit with the National Security Agency spying scandal. Now the whole nation is questioning whether it has a long-term future in an alliance with a nation that chose Trump as its leader.

Some of that may change as Europe is forced to adopt more Trump-like policies in the face of the migrant crisis and its other problems. However, this distaste is as much about Mr. Trump’s personality and his way of presenting himself as it is about his policies.

Warning about the cooling of relations between Europe and the U.S., Trumpet editor in chief Gerald Flurry wrote in 2014 that this “is a significant development. It is about the dismantling of a relationship that has helped to preserve peace in Europe for nearly seven decades!” He wrote:

Bible prophecy warns that a German-led European empire is going to rise up. We have said for over 50 years that it will probably be more powerful than both America and Russia!The age of American global leadership is drawing to a close. While the Germans might not come out and say so, they are reveling in that fact. The U.S. may try and repair relations with its former lover, but irreversible damage has already been done. The breakup, which started with the spying scandal, is going to continue to worsen until one of America’s greatest allies since World War ii becomes, once again, its greatest enemy!

“What makes the German-American split especially important is this: It is exactly what biblical prophecy told us would happen!” he wrote.

This German-American split is clearer than ever—and will accelerate further in the coming months. To learn more, read Mr. Flurry’s article “The Significance of Germany’s Break From America.”