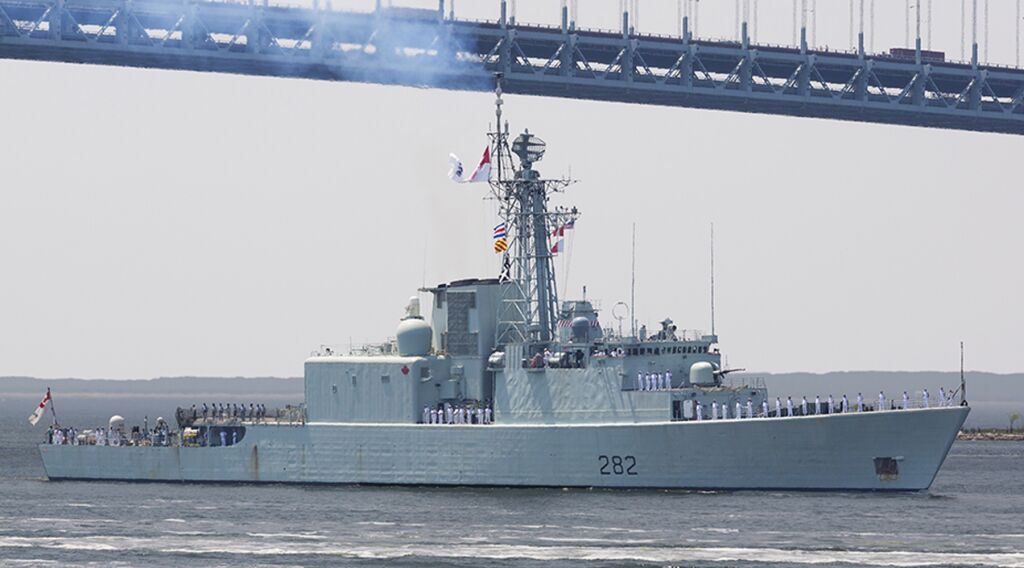 Canada’s military services can no longer defend the nation’s borders—much less its citizens. According to the new commander of the Royal Canadian Navy, Vice Adm. Ron Lloyd, Canada’s last destroyer, hmcs Athabaskan, will be retired from service in the spring of 2017, leaving the nation to rely on its allies for defense for at least the next seven years. Over the previous decades, Athabaskan and other similar vessels provided the capabilities of command and control for both the Royal Canadian Navy and the area air defense. By next spring, the Navy will be left with only 12 frigates, 12 coast defense vessels and 4 submarines. Canada will need to rely on the United States for its area air defense.

But it was not always this way. The Battle of the Atlantic during World War ii proved that Canada was a naval force to be reckoned with. The Royal Canadian Navy (rcn) played a critical role in the eventual victory by the allies over the European Axis powers. A historical information sheet from Veteran Affairs Canada reported, “The growth of Canada’s Navy was remarkable. At the beginning of the Second World War, the rcn had only six ocean-going ships and 3,500 personnel. By the end of the war, Canada had one of the largest navies in the world with 434 commissioned vessels and 95,000 men and women in uniform.” For a few months, it was even the fourth-largest navy in the world (following the ussr, Japan and France) in terms of number of commissioned vessels.

To counter the drawback of naval resources, Canada’s Navy purchased four Victoria-class submarines from the United Kingdom in 1998. It turns out that not only were those subs secondhand (they had been previously decommissioned by the Royal Navy in 1994), but they had been obtained at a ridiculously low price. Since the conclusion of that “deal,” Michael Byers and Stewart Webb reported that the vessels have been plagued with a variety of massive problems. While en route to Canada in 2004, a fire broke out on board the hmcs Chicoutimi, killing one naval serviceman. Later in the same year, the entire electrical system on board the hmcs Victoria was destroyed due to a maintenance error. In 2012, an originally scheduled two-year refit of the hmcs Windsor concluded after five years. Then, in December 2012, a serious defect was discovered in one of the two diesel engines of the same submarine. To add insult to injury, British Liberal Democrat M.P. Mike Hancock, representing Portsmouth South, commented on how the purchase deal went south: “Why were the Canadians daft enough to buy them? … I’m appalled we’ve done a dumb deal with an ally like this.”

Before the purchase of those ill-gotten excuses for submarines, the standing joke was that West Edmonton Mall had more submarines than the Royal Canadian Navy. At least those small subs at the mall took visitors on an underwater tour without incident.

Canada has a massive territory to serve and protect. It is the world’s second-largest country in total area, spanning 3.9 million square miles. From the 49th parallel bordering the United States, it claims the territory from its border with Alaska to the North Pole along the west coast and the same region west of Greenland, which belongs to Denmark. Geopolitically, the Arctic is proving to be a strategic resource area with large, untapped oil and gas reserves as well as many metals and minerals under the ocean bed. And Russia, which periodically conducts military exercises in the far north that sometimes intrude into Canadian airspace, would like to have access to those resources.

The North American Aerospace Defense Command (norad), which was established jointly by the American and Canadian governments in 1957 as a defense buffer in the far north in the event of a Soviet invasion during the Cold War, has committed to intercepting any Russian aircraft that enters Canadian airspace in the Arctic. norad’s commander, U.S. Adm. William Gortney, reported that at the same time as the 2014 downing of the Malaysian airliner over Ukraine, Russian military planes were flying over the English Channel and around the Arctic over Alaska and Yukon.

Unfortunately, the state of Canada’s Air Force is not much better. The air command fleet of 138 F-18 Hornets (obtained between 1982 and 1988) is sorely out-of-date and in dire need of replacement. Accidents, upgrades and retirements have reduced the fleet to 103 planes. In 1997, the Department of National Defense began to investigate the possibility for procuring replacements. In July 2010, the government announced it would purchase 65 Lockheed Martin F-35 Stealth fighters from the United States to replace the remaining 79 operational McDonnell Douglas CF-18s. Total cost, including delivery planned for 2016, was estimated at $6.8 billion. As reported by Jeremy Bender for Business Insider, this aircraft has been plagued with a wide variety of problems, not the least of which are serious problems with the computer software, flight control difficulties under certain circumstances, unreliability of a variety of components, as well as challenges with the plane’s Automatic Logistics Information System (alis).

To compound matters, during last year’s Canadian federal election campaign, the Liberals promised that if elected they would not buy the F-35s but would hold an open competition to search for a suitable replacement. Considering the slate of problems the Pentagon has reported with the aircraft, this currently leaves the Canadian Air Force with little or no true defense capabilities—and with no apparent backup plan in place.

Then there’s the problem with Canada’s Sikorsky CH-124 Sea King helicopters. The Canadian Treasury Board originally purchased 41 helicopters from Sikorsky Aircraft between 1961 and 1963. Over the years, the Department of National Defense has been plagued by a plethora of problems, including crashes, mechanical failures, and difficulties with the aging machines. Despite recent efforts to find replacements, there has been no satisfactory solution to the dilemma.

A July 2013 Canadian Broadcasting Corporation article reported, “That these aging beasts are still flying at all is testament to both the talents of those who have been operating and maintaining the old aircraft, and to the failings of a series of governments that have been unable to replace the tired, often grounded Sea Kings since at least 1986.”

And so the Canadian military and government’s dance with destiny continues.

We have seen this same scenario play out in other English-speaking nations. Both Britain and the United States have experienced similar serious decommissioning and reductions in their respective military arsenals, personnel and material from their once former greatness. In the late 1930s, despite repeated and blatant warnings by British Prime Minister Winston Churchill of the rising threat of Adolf Hitler and Nazi Germany, when Germany invaded Poland in 1939, Britain was vulnerable to invasion and conquest by the Nazis. At the conclusion of World War ii, Britain, whose empire once spanned the globe, was left exhausted and broke.

Trumpet Managing Editor Joel Hilliker described the demise of the once “Great” Britain as a formidable military and economic power in “Want to Know What a Former Superpower Looks Like?” [T]he Royal Navy—almost 900 warships strong at its peak—currently has 22 warships, only a third of which can operate at any one time,” he wrote. Sounds similar to today’s drawdown of the Royal Canadian Navy.

In “The History and Future of the U.S. Navy,” Abraham Blondeau wrote that the American naval force is currently “the most dominant maritime force in world history.” But in accordance with God’s prophecy in Leviticus 26:19, America no longer has the will to utilize that power.

As a nation originally colonized by Great Britain and a member of the British Commonwealth, Canada is a “child” of the biblical nation of Ephraim. For more information, read The United States and Britain in Prophecy. The Bible prophesies that “Ephraim also is like a silly dove” (Hosea 7:11). It is naive in how it responds to critical world events, which are rapidly building toward war. While the rest of the nations build their military arsenals and personnel, both Britain and Canada are foolishly diminishing theirs. Canada’s vulnerability is there for all to see.