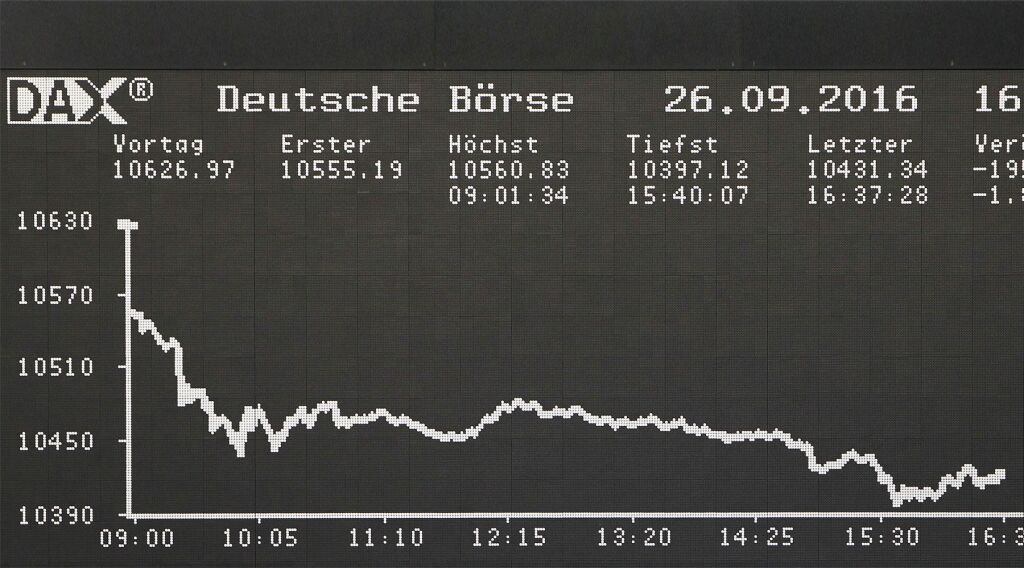 Deutsche Bank looks tailor-made to give Angela Merkel a headache.

Germany’s biggest banks are in big trouble. That’s not exactly news. Before the financial crisis, Deutsche Bank’s share price was nearly €100 (us$135) a share. At the start of this year it was €21.45 ($24). This week, it hit its lowest value since 1973 and currently stands below €11. Now its situation is so dire that its name is trending on Twitter.

Since the 2008 financial crisis, Germany has been the rock of stability for Europe’s economy. It has weathered the storm with low unemployment, while economic crises upended entire political systems elsewhere in Europe. Now the banks at the heart of Germany’s economy seem on the brink of going under. The global economic crisis that began in 2008 could be about to hit Germany.

This is far more than a problem for rich shareholders. It has implications for German Chancellor Angela Merkel personally, German politics as a whole, the euro crisis, the immigration crisis, and all of Europe. As Geopolitical Futures founder George Friedman wrote a week ago: “Germany is the fourth-largest economy in the world, the largest economy in Europe, the lender of last resort, and the foundation of European stability. If Germany weakens or destabilizes, Europe destabilizes, and it is not too extreme to say that if Europe destabilizes, the world can as well.”

The immediate trigger for the uncertainty came on September 16, when the United States Department of Justice announced that the bank could have to pay fines of up to $14 billion to settle claims of miss-selling mortgage-backed securities. Normally, $14 billion would be a trivial sum for a bank. But judging by its share price, Deutsche Bank is only worth $18 billion. The final number it ends up paying will be less—probably by a few billion dollars. But the company is losing billions of euros each year—it seems only a matter of time before the bank is worth less than nothing.

On September 26, the bank denied rumors that it had asked Chancellor Merkel for help with the fine and had been turned down. The rumors sent the share price falling another 7 percent.

Share price and profitability do not determine bank solvency. A catastrophic drop in share price alone doesn’t mean a bank will go under. But it does show the institution has some huge problems. And it does mean that people are quickly losing confidence in the bank.

This summer, the International Monetary Fund (imf) declared Deutsche Bank the most dangerous bank in the world. Among globally systemically important banks, “Deutsche Bank appears to be the most important net contributor to systemic risks,” it wrote on June 30.

Deutsche Bank is one of two banks at the core of Germany’s economic system. The other is Commerzbank, and it too is in trouble. It shares Deutsche’s long-term problems. Before the financial crisis, Commerzbank’s share price nearly hit €300 ($415) a share. Now, it’s less than €6. Its problems are also in the news—it announced it would cut 10,000 jobs and give no dividends this year.

Deutsche Bank is older than Germany itself. Known as the Big Three, Deutsche Bank, Commerzbank and Dresdner Bank bankrolled Germany’s economy for decades. In the mid-1980s, a German government study found that they control the voting authority of three quarters of shares in most big German companies. Dresdner Bank failed in the 2008 financial crisis and had to be bought out by Commerzbank, so the Big Three is now the Big Two. “Disaggregating Deutsche Bank from the German government’s political goals or the structure of German corporations is impossible,” reported Geopolitical Futures. “They are all inextricably linked.” If either of these banks goes under, a huge number of German businesses will take a major hit.

A crisis in Deutsche Bank would also spread far beyond Germany. The bank has deep links to banks around the world, including many in the United States. It would bring about the worst episode of the euro crisis yet seen. And it would put Ms. Merkel in an impossible position.

A bankrupt Deutsche Bank would trigger a political crisis in Germany, at the same time as the eurozone goes into economic meltdown. Therefore it seems almost certain that Deutsche Bank and probably Commerzbank would get some form of state aid if they were about to go bust.

That would be the lesser of the two evils, but it is still dangerous. In the recent Berlin elections, fringe left-wing parties—the Greens and the Left Party—won around 30 percent of the vote. A lot of Germans would not be happy to see their government bailing out fat cats, as they would see it. The pressure on the Christian Democratic Union to get rid of Merkel would increase.

And Merkel’s whole strategy for the euro crisis would unravel. “[I]f Deutsche does go down, it is looking increasingly likely that it will take Merkel with it—and quite possibly the euro as well,” wrote Matthew Lynn in the Telegraph. He wrote:

The politics of a Deutsche rescue are terrible. Germany, with is chancellor taking the lead, has set itself up as the guardian of financial responsibility within the eurozone. … For Germany to then turn around and say, actually we are bailing out our own bank, while letting everyone else’s fail, looks, to put it mildly, just a little inconsistent. … In truth, it would become impossible to maintain a hard-line in Italy, and probably in Greece as well.And yet, if Deutsche Bank went down, and the German government didn’t step in with a rescue, that would be a huge blow to Europe’s largest economy—and the global financial system. No one really knows where the losses would end up, or what the knock-on impact would be. It would almost certainly land a fatal blow to the Italian banking system, and the French and Spanish banks would be next. …In fact, Merkel is playing a very dangerous game with Deutsche—and one that could easily go badly wrong. If her refusal to sanction a bailout is responsible for a Deutsche collapse that could easily end her chancellorship. But if she rescues it, the euro might start to unravel. It is hardly surprising that the markets are watching the relentless decline in its share price with mounting horror.

But the most disturbing aspect of this story comes when it is put in context with other worrying signs coming from Germany. The German economy depends on exports. Weak growth in the eurozone means that other European nations can’t afford to buy as many goods from Germany. They have so far made up for this lost business by selling to China and the U.S. However, America is now importing less. This is having a knock-on effect on China, meaning that Germany’s last two growing customers will be cutting back simultaneously.

At the same time, international bodies are warning about the health of the entire global economy. With Germany’s reliance on exports, global problems very quickly become German problems. The Bank for International Settlements warned in its quarterly report on September 18 of growing instability in the financial market, especially in China. The instability that it warns of “does not seem to be cataclysmic,” wrote Friedman, “but given that Germany is at the heart of the earthquake, even a moderate shaking will bring it down.”

The annual report of the United Nations Conference on Trade and Development, published on September 22, is more dire. In “UN Fears Third Leg of the Global Financial Crisis—With Prospect of Epic Debt Defaults,” the Telegraph’s international business editor Ambrose Evans-Pritchard warned that the coming crisis could “prove to be the definitive crisis of globalized capitalism, the demise of the liberal free-market orthodoxies ….”

A crisis in just Deutsche Bank, or even in Deutsche and Commerzbank, could possibly be fixed with a bailout. Germany’s debt is manageable, and it is taking in more money in tax revenue than it is spending. But when you view the whole situation, it’s clear that the bank crisis is a symptom of a much deeper sickness—one that cannot be cured so easily. Last week, Friedman warned:

In my view, there is a growing sense in Germany that the German system is failing … the tremors are now being felt by the finest financial analysts in the world: ordinary people who work for a living and need their paychecks to survive. The political base of modern Germany is crumbling ….

Economic crises in the 1930s drove Germans to vote for the Nazis and Communists. Now they are already voting for fringe parties like Alternative for Deutschland and the Left Party. These parties are not the same as Nazis and Communists, but the trend points to the same rejection of mainstream politics.

At the same time, economic troubles in Germany would open up all the old wounds and questions in the euro crisis. Such a crisis would transform Germany and Europe.

We’ve seen this already in Greece. The nation is ruled by Syriza, a party that won only 5 percent of the vote before the financial crisis. The party came from nowhere to govern the country. If the same kind of political earthquake hits Germany, its effects would be felt around the world.

Even if these problems don’t come to a head soon—if investors never test the assumption that the German government will always stand behind its main banks, for example—the weaknesses are still there, ready to ensure that any global crisis rocks Germany to its core.

Herbert W. Armstrong wrote in 1984 that a massive banking crisis in America “could suddenly result in triggering European nations to unite as a new world power, larger than either the Soviet Union or the U.S.” (co-worker letter, July 22, 1984). The euro crisis exposed that the eurozone cannot function in its current form—it must either fall apart or come together as a superstate. Europe has taken some important steps toward that superstate. But a fresh outbreak of the banking crisis, this time in Germany, would put the eurozone under far more pressure than even in 2008. It would change German politics, while at the same time forcing at least some eurozone countries to unite—two key trends the Trumpet has been forecasting for years.

For more on how an economic crisis could transform Germany and Europe, read Trumpet editor in chief Gerald Flurry’s article “How the Global Financial Crisis Will Produce Europe’s Ten Kings.”