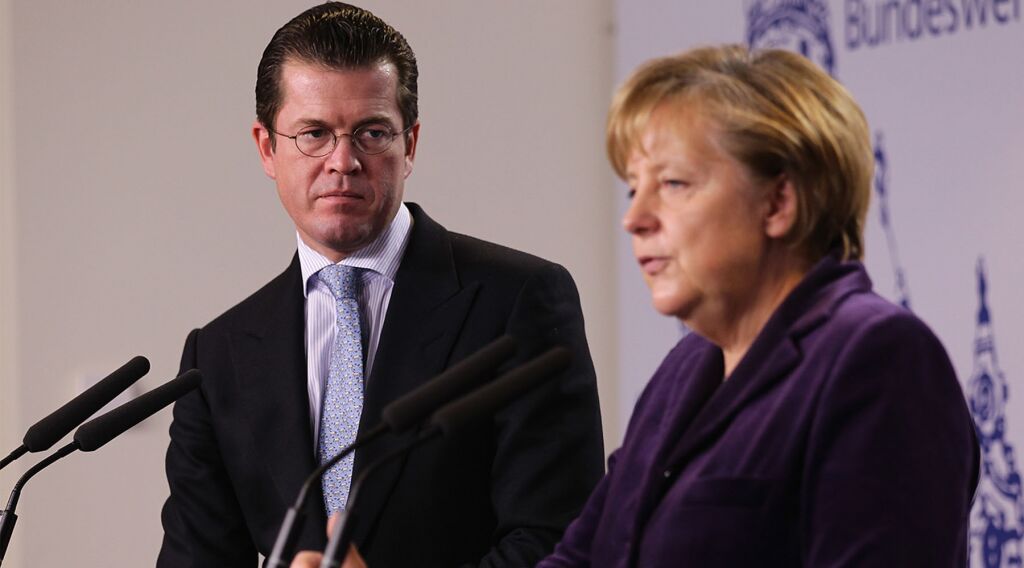 Germany’s government, especially Angela Merkel, is proving inadequate. For a leader with the right personality and leadership, this could be a terrific opportunity to seize control of Germany.

Behind these facts is a fundamental truth: Postwar Germany, perhaps more than any other modern nation, is accustomed to political stability and order.

So what happens if this stable, dependent political system breaks down? History provides some insight.

The Weimar Republic (the democratic state of Germany between 1919 and 1933) was plagued by instability and disorder and was, in general, deeply unpopular. Extremist parties thrived, while the Weimar government was constantly under threat of collapse (there were 14 national elections in 14 years). By 1933, the Weimar system was so enfeebled and there was so much systemic instability that the regime didn’t stand a chance against Adolf Hitler and National Socialism. Seven years after he exploited the political and social crises to take control of Germany, Hitler and the Nazi Party lit the world on fire.

Germany’s postwar political system was built, among other purposes, to prevent another Weimar scenario. And for seven decades this system has successfully (though not perfectly) created political stability, order and consistency; marginalized extremist parties and ideologies; and secured the confidence of the German people. Germany’s postwar system has been so successful that few today would consider the notion that Germany could experience Weimar-type conditions. But past success doesn’t guarantee future success, and right now, multiple crises are converging to put enormous pressure on Germany’s postwar political system. It’s still early, but a major political emergency could be imminent.

First, consider the crises Germany currently faces. Most obvious is the migrant issue and the integration of more than 1 million migrants, most of whom are Muslim. This comes with significant sacrifice and cost, economically, socially and culturally. Radical Islam has taken root inside Germany and is bent on inflicting violence and suffering. Tension between Germans and foreigners is mounting, and extreme ideologies and politics are rising. Germany’s economic outlook is uncertain and precarious. Deutsche Bank, the nation’s largest financial institution, is on the cusp of meltdown, and its struggles are indicative of a larger financial crisis. Outside Germany, a belligerent Russia is pushing and prodding in Eastern Europe. Meanwhile, multiple ailing European countries are counting on Germany for leadership—and money. While the convergence of all these issues is serious, most alarming is the looming political crisis.

Since 2005, mutti, or “mother,” Merkel has been a textbook example of Teutonic consistency and steadiness, but there are now clear signs of weakness and vulnerability. The problem isn’t that Merkel lacks solutions or leadership; the problem is that rapidly growing numbers of Germans flat-out disagree with Merkel’s solutions and are becoming disenfranchised and angry about her persistence in pushing them. The chancellor, her counterparts and the mainstream German media are increasingly out of touch with the average German. In last Sunday’s state elections in Mecklenburg-Western Pomerania, Merkel’s own constituency, the Christian Democratic Union (cdu), came in third behind the Social Democrats (spd) and the far-right Alternative for Germany (AfD). It was the cdu’s worst showing in state elections since World War ii. The result was a direct function of Merkel’s leadership, specifically her handling of the migrant crisis.

One August poll showed 50 percent of Germans are against Merkel serving a fourth term. An August 4 survey revealed support for Merkel had dropped by 12 points to the lowest level in five years. The same poll revealed that two thirds of voters opposed Merkel’s handling of the migrant crisis. The chancellor is taking more and more criticism from her political partners as well. “Angela Merkel has clearly reached her peak,” stated Ralf Stegner, deputy president of the spd, following Sunday’s election. In an interview, Sigmar Gabriel, leader of the spd, a key partner in Merkel’s coalition government, criticized Merkel’s optimistic motto, “Wir schaffen das” (“We can do this”), and stated that Merkel had “underestimated” the challenge of integrating the migrants.

Some of the most intense criticism is coming from Merkel’s friends and allies in Bavaria, the heart and soul of German conservatism. Bavaria’s Christian Social Union (csu) has been a stalwart ally of the cdu for decades and is the primary reason for the long-standing dominance of conservative coalition governments. These days csu officials, including party leader Horst Seehofer, are extremely critical of Merkel. Many politicians are already on record saying they will not endorse her reelection in national elections in 2017. Commenting on last Sunday’s state election, Horst Seehofer laid the blame squarely with Merkel and warned that unless something changes soon Germany’s conservative parties will be in big trouble. “The situation for the conservatives is extremely threatening,” Seehofer told Sueddeutsche Zeitung. The problem, he said, is that voters are sick and tired of “Berlin politics.” Seehofer has yet to endorse Merkel for reelection.

On Monday, Carsten Brzeski, a chief economist at German bank ing-DiBa, warned that Sunday’s election was “another shot across the bow for the national government and Chancellor Angela Merkel.” Since Sunday, even Germany’s mainstream media, which is generally supportive of Merkel and her migrant policy, has begun to recognize that she may need to step down. On Tuesday, German Finance Minister Wolfgang Schäuble in an address in the Bundestag recognized the seriousness of the times. Germany is facing many extreme pressures, he warned, and there “is an increasingly loud call among us for a strongman.” Conditions are ripe, he warned, for the emergence of a “demagogue.”

But who could replace Merkel?

Right now, there is no obvious alternative. It’s Angela Merkel or bust. It’s really quite remarkable: Despite the obvious souring for Merkel, there’s no significant national conversation about who might replace her. Until Sunday’s election, it was hard to even find articles addressing the subject of post-Merkel Germany. Even now, this isn’t a dominant issue in the German media. Merkel doesn’t have an obvious successor. There is no individual, on either the left or right, actively campaigning on a national scale to replace Merkel and lead Germany. Germany doesn’t have a Donald Trump or Hillary Clinton; it doesn’t have a Nigel Farage or a Marine Le Pen.

America, Britain and France all have obvious candidates vying to replace the incumbent party or leader, or to represent on a national scale the dissatisfied and angry segments of the population. These nations have popular individuals who are publicly discussing the problems, recognizing the public’s frustrations, and then fielding their own ideas and solutions. Some of these ideas and solutions (and candidates) are ridiculous. But the point is, dissatisfied Americans, British and French are represented by a national figure and movement. They have someone who shares their concerns, someone who at least appears to recognize their worries. Worried Americans, British and French have someone to rally behind. To Americans concerned about immigration, Donald Trump is superman. And to Americans concerned about Donald Trump, Hillary Clinton is superman. To Britons concerned about immigration or the membership in the European Union, Nigel Farage is superman.

Germany today doesn’t have a superman.

There are, of course, politicians in Germany who would put their hand up to do Merkel’s job. But no one is actively, enthusiastically going after the job; and the German public isn’t giddy for any particular candidate. So far, no one has developed a national campaign—no one is going on television or writing articles or producing commercials—to reach out to the German people and show them that he understands their concerns, that he agrees with their anxieties, and that he has tangible solutions to Germany’s crises. No one has captured the imagination of the people. Germany right now lacks a leader with the personality, the leadership, the style, the policies and the solutions to get the public excited and hopeful.

So, the public’s desire for a superman grows by the day.

This is a potentially dangerous scenario. Politics abhors a vacuum. The greater the number and intensity of the crises, the stronger the desire for someone with real solutions. This is exactly the scenario that facilitated the rise of Adolf Hitler and the Nazi Party. Compared to his Weimar counterparts, Hitler was energetic, passionate and urgent. He also came along with what seemed like practical, rational solutions. And by 1933, the public’s frustration and anxiety was so intense—its hunger for better leadership so acute—that many Germans ignored Hitler the sociopath and, instead, embraced him as a superman who would soothe their anxieties and restore stability and order.

The Merkel administration today isn’t the Weimar regime. (The Merkel regime, at least between 2005 and 2014, was the antithesis of Weimar Germany.) But what if the Islamist terrorist attacks continue? What if migrants continue raping and attacking Germans? What if migrants continue pouring in? What if the economy slumps? What if the far right continues to rise? It’s not unreasonable to expect all these trends to continue. What will Merkel’s fate be then? Perhaps it will all be OK and the right candidate will emerge at the right time to capture the hearts of the German people and seamlessly replace Merkel. Perhaps Merkel will change her views and side with the German public. But let’s be realistic: The most likely scenario is that the crises will continue to converge, Merkel’s popularity will continue to drop, and the hunger of the German people for an individual with real solutions will continue to grow.

Germany, like many other Western governments, is headed for a major political crisis. The German people generally tend to be imperturbable and pragmatic, and they have a high tolerance for discomfort and sacrifice. But they dislike instability and uncertainty, and they have a low tolerance for disorder. So far no German leader or political party—including and especially Angela Merkel—has emerged on a major scale with a plan to confront and solve Germany’s many crises. Germany so far has not experienced any significant improvements in any of these areas. Unless this changes, and soon, Germany is on the path to a major political and social crisis.

As we watch the situation in Germany we need to keep an eye out for potential Merkel replacements. For an individual with the right personality and leadership, Germany right now is an opportunity. There are millions of disenfranchised and angry Germans craving a leader whom they can really get excited about. Multiple major crises are brewing that need solutions, but they can also be leveraged as political opportunities to assume higher office. And, at least so far, there is no serious competition for public favor other than Chancellor Merkel. But Merkel’s star is diminishing.