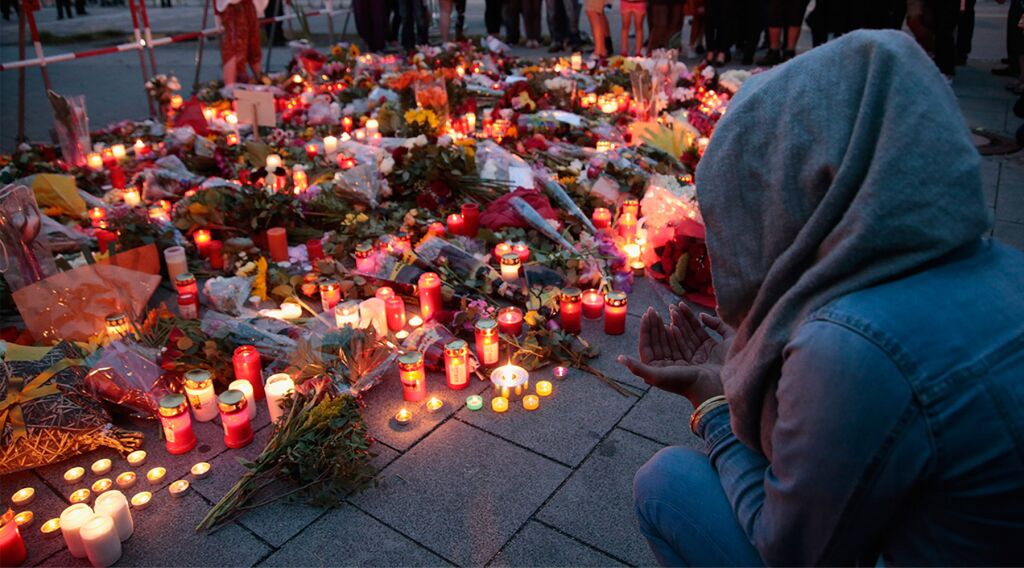 A series of high-profile attacks leave Germans wondering what is happening to their country, while their leaders insist everything is normal.

Germany was shocked to experience five high-profile killings in the space of only one week. A teenage Afghan immigrant seriously injured three on an ax rampage July 18, leaving a railway carriage looking like a “slaughter house,” as one witness put it. He claimed allegiance to the Islamic State.

On July 22, an Iranian born in Germany killed nine with a Glock pistol he’d purchased illegally. He spent a year planning the attack. So far the police have published no links to Islamists, but he clearly has a Muslim background.

Then on July 24, a migrant from Syria killed a pregnant woman and wounded two others with a meat cleaver. German authorities have said this was not a terrorist attack and that the attacker knew his victim. But knowing that this was “just” a murder is of little comfort.

On the same day, a Syrian immigrant whose deportation to Bulgaria had twice been delayed tried to bomb a music festival in Ansbach, Bavaria. His lack of a ticket meant he was not let in, so he blew himself up outside, wounding 15.

On July 26, a man shot his doctor at a hospital in Berlin before shooting himself. Few details have been released thus far, but police say there are “no signs at all” to links with radical Islam. Meanwhile in France, two Islamist soldiers slit the throat of a priest in his 80s and tried to take his congregation hostage.

“Has the world gone mad?”, Spiegel Online asked in a July 25 article “Apocalypse Now: A Year of Crises, Shocks and Fears of Terror,” reflecting the mood of many in Germany.

“It feels like the world is out of step, that multiple crises are encroaching upon us and that the distant world of international politics is about to get dangerously personal,” it wrote. “How are we supposed to deal with the feeling of living in an era that we no longer seem to understand?”

“We are living in an age of shocks and crises that could well be traumatizing in their rapid succession and concentration, since it’s not yet clear whether they’re only a temporary jolt or the beginning of a trend with no end in sight,” it warned.

Guido Steinberg, an expert on terrorism at the German Institute for International and Security Affairs, said, “I am absolutely pro-Syrian [migrants], but the German government has underestimated the problem.”

These asylum seekers, he said, “are traumatized, they are brutalized, and they react in ways that have become totally alien to our country.”

Yet the German government has tried to play down the crisis. Interior Minister Thomas de Maizière insists that this has nothing to do with migrants. And head of the German Police Union Oliver Malchow said, “We are not at war. We are not even under a state of emergency.”

Chancellor Angela Merkel has said very little about the attacks, and Germany’s threat level has not been raised. The official government response so far is to pretend that there is no crisis.

Of course Germany is not the only country with its head in the sand. “Syrian Migrant Dies in German Blast” was the bbc’s headline on the Ansbach attack—as if the problem is random German explosions not a migrant who wanted to kill.

But in Germany this denial is most widespread. “For many reasons, some of them historical and understandable, many German politicians are wary of acknowledging, first, that there are questions about whether all immigrants can smoothly integrate into Western societies and accept Western values and, secondly, that some voters have legitimate worries about the arrival in their country of people whose attitudes seem far removed from their own,” read an editorial in the Telegraph. “This reticence should end, because it risks doing real harm.”

“Such concerns do not go away just because politicians refuse to acknowledge them, instead erupting unpredictably,” it warned. “To avoid these eruptions, those worries must be addressed sensibly and calmly by mainstream politicians. Otherwise the only beneficiaries are fringe factions more inclined to exploit social problems than solve them.”

They’re right—this is dangerous. This message is comforting to the German population for now. But as these attacks continue, or a large, Nice-size attack hits Germany, what then? Trumpet columnist Brad Macdonald wrote in “Germany, Migrants and the Big Lie,” “Angela Merkel’s government refuses to give serious attention” to the concerns of the German people regarding immigration, “and refuses to tell the truth about the impact the migrants are having and will have on the nation.” The article, published in March, noted that many of the people who have these concerns “are not hardcore neo-Nazis. They don’t want to persecute the migrants or see them imprisoned, beaten up or killed.” It’s perfectly logical to worry about the safety of your family in the wake of these attacks—that does not make someone an extremist. Ms. Merkel’s government is still trying to insist that Germany is safe. How will people react once this is proved wrong? She risks thoroughly discrediting her whole administration. Mr. Macdonald warned:

If she continues to do this, Germany’s chancellor risks helping transform the German people—and Germany itself—into something very different and much more frightening than the democratic, peaceful, friendly nation we see today.The Merkel government’s handling of this situation is turning the German people into a ticking time bomb! The more disillusioned, frustrated and angry the German people become, the more vulnerable they will be to radical politics and radical leaders with radical solutions.

That was true of the migrant crisis, but ignoring the threat of terror in today’s climate is even worse. If Germany’s entire ruling class, media and defense establishment failed to even notice the crisis, how could they be trusted to fix it? And if trust in the traditional establishment is destroyed, who else will Germany turn to?

French leaders recognized Islamic terror as a serious problem, but they were booed when they failed to stop it. How will Germans react if their government continues to deny that a problem even exists?