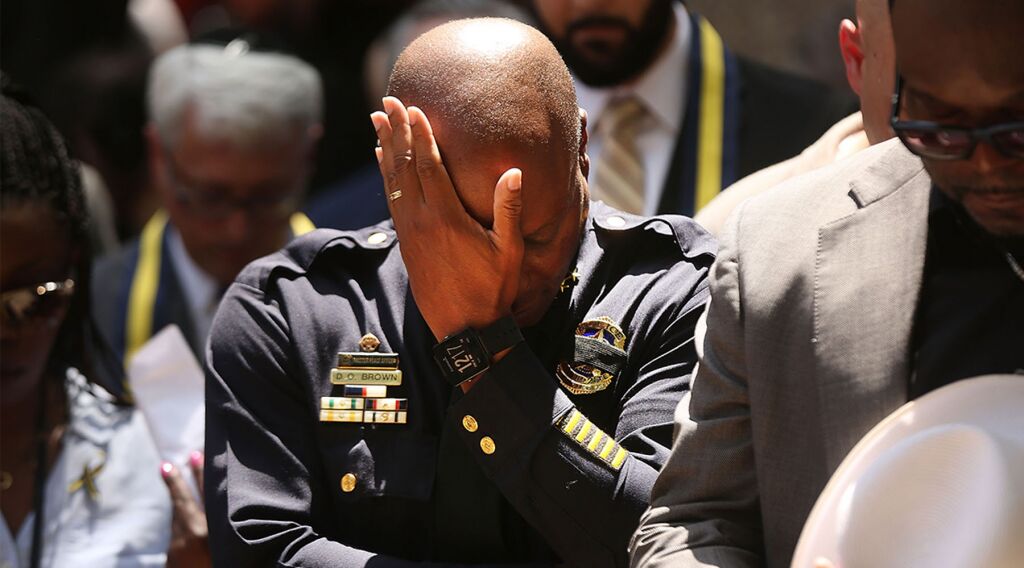 America’s law enforcement officials are under attack. The massacre in Dallas is only a snapshot of what the Black Lives Matter movement and others are advocating.

To a growing number of these protesters, while black lives might matter, the lives of law enforcement officials do not. But expect the major media to bend over backwards creating a story line that says these killers were in no way connected to Black Lives Matter.

Just look at what has been building over the years: In Ferguson and St. Louis, Missouri, protesters chanted, “Kill the police” and “We’re ready for war.” In Minnesota, they chanted, “Pigs in a blanket, fry ‘em like bacon.” In Chicago, it was, “When I say ‘oink, oink,’ you say ‘bang, bang.’”

Should the Dallas attack really come as a surprise to anyone? As the New York Times (and others) reported, that attack occurred “during a demonstration protesting shootings by officers in Minnesota and Louisiana this week.” What happened Thursday night was payback.

A Dallas police spokesman said at a press conference: “We believe that these suspects were positioning themselves in a way to triangulate on these officers from two different perches and garages in the downtown area and planned to injure and kill as many law enforcement officers as they could.”

According to the Times, “The police believe four suspects coordinated the attack with rifles, Police Chief David O. Brown said, and positioned themselves in triangulated locations near the end of the route the protesters planned to take.”

One of the gunmen, Micah Johnson, was killed in a standoff with police in a parking garage shortly after the shooting. Before dying, Johnson told police he was upset over a recent string of police shootings against blacks and “wanted to kill white people—especially white police officers.” Police are investigating three other suspects.

They are promising more violence and more bloodshed. And distinguished leaders in the black community are inciting such violence! What we’re witnessing, as former New York Mayor Rudy Giuliani said in December, is the result of “propaganda, starting with the president, that everybody should hate the police.” Giuliani said black leaders, especially, have incited “strong anti-police hatred in certain communities.”

Following the riots in Baltimore last year, U.S. President Barack Obama remarked: “Well, there’s some police who aren’t doing the right thing.” A year earlier, he also lashed out at law enforcement officials: “There’s also no excuse for police to use excessive force against peaceful protests.”

During the “peaceful protests” in Dallas, the police did not use “excessive force.” In Baltimore, remember, the police were instructed to give plenty of “space” for the rioters, and the rioters ended up destroying half the city!

Notice this from the Times (emphasis added throughout):

Although the shooting occurred during a rally to protest police-involved shootings, it was unclear what relationship the gunmen had to the demonstration.It was unknown what the motives were, “except they fired on the police,” said Clay Jenkins, the Dallas County judge and the county’s chief executive.

The day after the attacks, the motives were quite clear: They wanted to kill white people—especially white police officers. It’s all about payback for Trayvon Martin, Michael Brown and Freddie Gray—all cases where the white police officers have been acquitted and/or exonerated.

Again from the Times:

Chief Brown said it was too early in the investigation to say whether there was any connection between the shooters and the demonstration. He suggested that the suspects had some knowledge of the march route.”How would you know to post up there?” he said. “So we’re leaving every motive on the table of how this happened and why this happened.” He added, “We have yet to determine whether or not there was some complicity with the planning of this, but we will be pursuing that.”

Be sure to read my father’s May-June 2016 Trumpet article “The Real Agenda Behind Black Lives Matter.” He explains how this movement is essentially a reincarnation of the Black Panther organization from the 1960s and 1970s—a movement glorified during this year’s Super Bowl half-time show.

Black Lives Matter started in 2012 after George Zimmerman shot and killed African-American teenager Trayvon Martin. One of its three founding members, Alicia Garza, candidly cites Assata Shakur as a key influence. Shakur is an African-American activist who murdered a New Jersey state trooper and then fled to Cuba for political asylum. At a February 18 event at Mizzou University, Garza was paraphrased as saying, “The goal of the Constitution was to make an agreement between factions known as states, which were built on the backs of black slaves.” She described constitutionalism as racism, saying: “The people vowing to protect the Constitution are vowing to protect white supremacy and genocide.’”

President Obama has met with this woman. Earlier this year, the president said this about Black Lives Matter: “As a general rule, I think that what, for example, Black Lives Matter is doing now to bring attention to the problem of a criminal justice system that sometimes is not treating people fairly based on race, or reacting to shootings of individuals by police officers, has been really effective in bringing attention to problems” (April 23).

This is the kind of rhetoric that incites race riots and war. The carnage in Dallas on July 7 was only a tiny snapshot of what the Bible prophesies for the latter days.