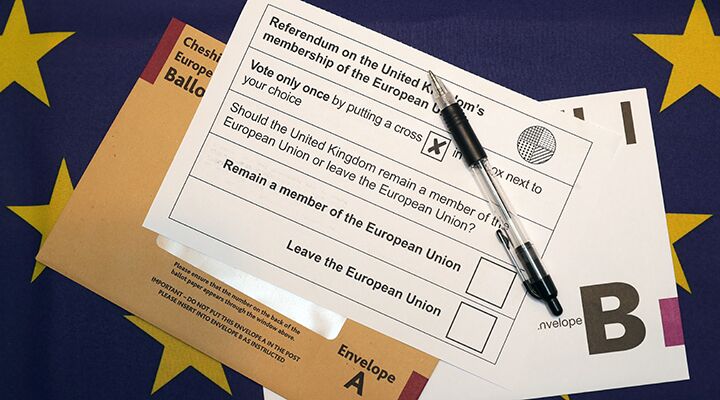 Watch the Brexit vote today. Whichever way it goes, it could mark a turning point for Europe and the world.

Britain’s referendum on its membership in the European Union is its most important decision in a generation. But regardless of which option the Brits choose, June 23 could mark a major turning point, both for Britain and for the EU. The referendum is forecast to be close.

The Fate of Europe

Even if Britain votes to stay, it will not deepen its ties with the European Union. Britain has no appetite for handing over more power to Brussels.

Remaining in the EU will be under the conditions that British Prime Minister David Cameron negotiated with EU leaders over the last year. While Britain received little in the way of practical concessions, it did secure a clear and legal opt out of “ever closer union.” Britain has drawn a line in the sand: It will accept no more European integration.

If Britain leaves, however, the brakes it applied to Europe’s push toward becoming a superstate will be lifted. It will no longer be able to slow Europe down.

Guy Verhofstadt, leader of the Alliance of Liberals and Democrats for Europe and former prime minister of Belgium, expressed exactly this hope in an interview with the EU Observer on June 3. “The whole discussion and referendum around British membership is an opportunity,” he said. “Why? Because if it is a ‘No,’ we need to start negotiations. … If it is a ‘Yes,’ we agreed with Cameron to translate the special status for Britain into the treaty … and he promised not to make obstacles for the deepening of the union.”

Summarizing his comments, the EU Observer wrote, “No matter what the result of the British referendum on 23 June, it will lead to changes in the European architecture.”

German EU Commissioner Günther Oettinger also believes the EU could advance in the case of a Brexit. “My expectation would be that the European project would gather new dynamics,” he told Politico. The EU may have to wait until the next series of elections are finished in 2017, but then “I believe we will gather more power and strength,” he said.

Over the last few months, European leaders have been discussing, behind closed doors, a European Defense Union. Germany will publish a paper on it on June 24—the day after the referendum. It will be discussed at an EU meeting scheduled for June 28. Whichever way Britain votes, EU leaders plan to move forward with this radical step almost as soon as the vote is concluded. Britain would never sign up to such an army, but officials are talking about moving on without them.

Of course, there are those who believe that a Brexit vote would be the beginning of the end for the EU. They think other nations will follow suit, leaving the EU to unravel or fade into irrelevance.

To a certain extent this may be possible, but in the longer term, it doesn’t matter. Those who point to the fragility of the EU make good points. At the Trumpet, we have always forecast that this union will be short-lived and much smaller than it is now. Getting 28 nations—each with its own proud and separate history, in many cases a history largely comprised of fighting other European nations—to form a superstate was always a tall order. Practically speaking, it will only be possible with a smaller group of nations. And even then, they will only be able to stick together for a short time and in the face of a common enemy.

But if the EU falls apart in the wake of a Brexit, Germany will remain Europe’s richest and preeminent power. With Russia rising, Central and Eastern Europe will continue to look to Germany for defense. The prosperous, northern European nations immediately surrounding Germany will still have strong trade links with Germany, and there will be a strong incentive for Germany to form an open-border zone with these nations.

If Brexit does cause the EU to fall apart, then from its ashes, a union centered on Germany will rise.

The Decline of Britain

Both sides of the referendum disagree on how much the EU membership has helped or hurt the nation. But when it comes to Britain’s biggest problems, EU membership is irrelevant.

Britain has a huge debt problem. Householders are forecast to borrow at an “unprecedented” rate this year, higher than at any point since records began in 1987, the official for Budget Responsibility warned in March. Total household debt is at $2.17 trillion—an average of around $44,000 (£30,000) a person. Among the G-7 group of advanced economies, only Canada has higher debt-to-income ratios.

Last year, Britain’s government borrowed an equivalent of 4.4 percent of its gross domestic product. The only EU nations with a higher level of borrowing are Spain and Greece, both troubled economies that have required some form of bailout.

Britain’s trade is in a dire position. Its current account deficit is at 7 percent of gdp—the highest peacetime level since records began in 1772. At the heart of this problem is the simple fact that Britain is importing far more than it is exporting.

The state of a nation’s society is much harder to quantify than the state of its economy, but here too the situation is dire. In the Aug. 11, 2011, Australian, Theodore Dalrymple wrote:

British youth lead the Western world in almost all aspects of social pathology, from teenage pregnancy to drug taking, from drunkenness to violent criminality. … British children are much likelier to have a television in their bedroom than a father living at home. One third of them never eat a meal at a table with another member of their household—family is not the word for the social arrangements of the people in the areas from which the rioters mainly come.

Since then not much has changed. The nation leads Western Europe in teen pregnancies and a host of other societal ills.

These problems are all unconnected with the European Union. Many EU nations do not share them, and leaving the EU won’t fix any of Britain’s social problems.

This is not to say that today’s vote is unimportant. Both outcomes have the potential to be major turning points for the EU, while neither outcome can fix Britain’s fundamental problems.

The Trumpet and its predecessor the Plain Truth have forecast Britain’s break from the European Union since it joined in 1973.

Herbert W. Armstrong wrote in Mystery of the Ages:

[T]he soon-coming resurrected “Holy Roman Empire”—a sort of soon-coming “United States of Europe”—a union of 10 nations [will] rise up out of or following the Common Market of today (Revelation 17). Britain will not be in that empire soon to come.

Germany is the economic and military heart of Europe. Probably Germany will lead and dominate the coming United States of Europe. But Britain will be no part of it!

The Trumpet has consistently proclaimed the same message. “We have been prophesying for over 70 years that a strong dictator is about to rule over Europe,” wrote Trumpet editor in chief Gerald Flurry in 2012. “We proclaimed that he would not be voted in by the public. We have also said for many years Britain would not be a part of the final European Union.”

These forecasts have already been proved right. No matter what the result of today’s vote, ultimately, Britain will not be part of a federal Europe. Just stay tuned.

Considering the accuracy of that longtime forecast, it makes sense to look to the same source that prophesied of this dramatic break to find out what is coming next. For more on what the Bible says about the future of the European Union, read The Holy Roman Empire in Prophecy. And for more on the future of Britain, read The United States and Britain in Prophecy.