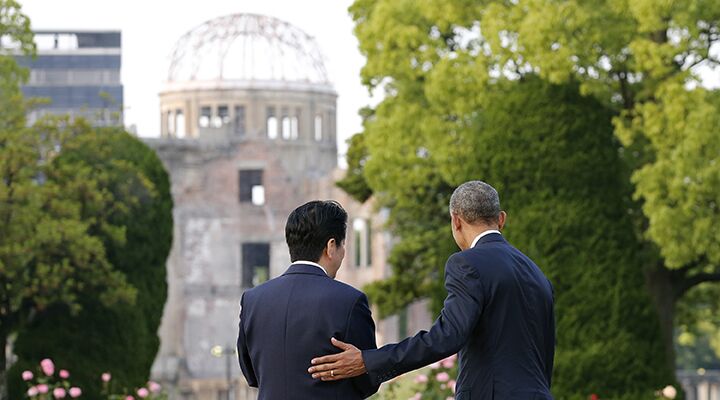 United States President Barack Obama became the first sitting U.S. president to visit Hiroshima. Japanese Prime Minister Shinzo Abe gave what he called a “wholehearted welcome” to Mr. Obama’s May 27 visit to the memorial of the world’s first atomic bomb attack, in what many view as another “apology tour.”

“Mr. Obama’s predecessors had good reasons to avoid Hiroshima,” the New York Times wrote May 25. “None wanted to be seen by American voters as apologizing for a decision that many historians even today believe, on balance, saved lives.”

Mr. Obama stayed away from explicit statements like, I’m sorry the U.S. bombed Hiroshima. But the tone of the speech was certainly apologetic—saying, for example, that the bombing shows “[h]ow easily we learn to justify violence in the name of some higher cause.”

Mr. Obama and those like him have forgotten, or are ignoring, the key facts surrounding America’s use of the atomic bomb. This historical amnesia has serious implications.

In Japan We Trust

In all of Mr. Obama’s almost-apologies, the fact that Japan started the war was ignored. Too many today do not want to assign blame. Each side in a war is considered equally immoral. Wars are written off as either the fault of both sides, or accidents.

In Daniel Unlocks Revelation, my father wrote about one commentator who blamed World War i on “bloody events.” My father wrote, “To say that the war started because the powers were ‘caught in the webs of their alliances’ is to say that nobody was at fault! It just happened—nobody could help it; nobody could stop it—you can’t blame Germany, or Austria, or Britain, or France, or Russia.” Chaos ensues when men are unwilling to assign blame correctly.

A complete view of this history demonstrates the importance of a strong America that is willing to quickly stand up to aggressive powers. But if you generalize it so much that the only lesson you gain from Hiroshima is that war is a bad thing and must be avoided at all costs, then you encourage the kind of weakness that caused World War ii in the first place.

Who is responsible for the millions of deaths in the war in the Pacific? “The road to Hiroshima and the massive loss of life in the Pacific was paved by unprovoked Japanese aggression at Pearl Harbor,” Victor Davis Hanson wrote in “President Obama Is Visiting Hiroshima. Why Not Pearl Harbor?” “Americans and their president should remember the lessons of that surprise attack 75 years ago this year,” he added.

Japan bombed America into the war—sensing victory, sensing weakness. George Freidman said bombing Hiroshima and Nagasaki was a moral necessity. At the time, it was common knowledge that it would take two atomic bombings to force the Japanese to surrender and end a brutal war that had been raging, in the case of Japan, since its invasion of China in 1931. “For most of the world, the end of World War ii led to jubilation.” This was generally understood in 1945, but today, politicians and historians water down the truth about this history. They obscure the blame.

Notice what President Obama said in his 2009 Prague speech: “[A]s a nuclear power, as the only nuclear power to have used the nuclear weapon, the United States has a moral responsibility to act. We cannot succeed in this endeavor alone, but we can lead it, we can start it. So today, I state clearly and with conviction America’s commitment to seek the peace and security of a world without nuclear weapons.”

He restated that again in Japan two weeks ago—and he makes these statements about disarming America even as Japan is in the midst of a massive military buildup! Article 9 of the Japanese Constitution, imposed by the U.S. because Japan was such a killing machine, says, “land, sea and air forces, as well as other war potential, will never be maintained.”

Mr. Obama’s visit to Hiroshima is broadly interpreted as an endorsement of Abe’s campaign to reinterpret that Constitution and lead Japan away from its guilty past and into the world arena of global conflict. America’s pacifism is awakening the samurai. In Russia and China in Prophecy, Chapter 5 discusses “Japan’s Place in the Future.” It shows how Washington is, in fact, pushing for Japan to remilitarize and “to shoulder some of the burden of stabilizing global conflicts.” Fear of U.S. inaction coupled with fear of increasing Chinese and North Korean aggression is motivating Japan to once again become a military power.

The kings of the east are becoming restless. All the while, America’s president is apologizing for ending the war in the Pacific and actually saving American and Japanese lives.

It is forgotten that Japan continued to occupy vast areas of China, administering it with brutality at least equal to the Nazis. Critics of Hiroshima tend not to remember the ongoing war in China, and that with each month the war continued, the Japanese killed more Chinese citizens. They assume that waiting for Japan to capitulate did not have a human cost. From the standpoint of the Chinese, every day the war went on cost thousands of Chinese lives. … Around 140,000 Japanese may have died at Hiroshima, but at least the equivalent in Chinese lives were saved as a result. Critics of Hiroshima leave China out of the equation, which they must do in order to make their case.

China has not forgotten the atrocities that Imperial Japan brought on millions of Chinese civilians. In response to President Obama’s Hiroshima visit, “[t]he Chinese government suggested on Friday that the atrocities committed by Japan on Chinese soil during World War ii deserved more attention than the bombing of Hiroshima,” the New York Times reported.

Chinese state news agency Xinhua wrote May 27 that Japan had a “covert agenda” in hosting President Obama in Hiroshima. “The Japanese government is trying to use the historic visit to highlight Japan’s image of a ‘war victim’ while downplaying its role as an aggressor in World War ii,” Xinhua wrote.

“No matter what wishful thinking Washington and Tokyo are engaging in, Obama’s Hiroshima visit should not be used as an occasion to whitewash Japan’s atrocities,” it concluded. Mr. Obama’s visit further confirms to China that the U.S. no longer has the will to stand up to an aggressive power the way it once did. This U.S. weakness, together with Beijing’s wariness of Japan, is fueling a massive military expansion in China.

As the United States apologizes for its past and reduces is military strength and influence worldwide, the rest of the world is frantically preparing for the next round of world war!

Is the World Really Getting Safer?

Mr. Obama did get one thing right in his Hiroshima speech. He spoke of mankind’s “core contradiction”—the fact that scientific advancement has not enabled man to bring peace and safety to this world. It’s actually made the world much more dangerous! Herbert W. Armstrong often referred to this same paradox.

Almost 71 years ago, mankind entered into the atomic age. U.S. President Dwight Eisenhower said in his first inaugural address on Jan. 20, 1953, “Science seems ready to confer upon us, as its final gift, the power to erase human life from this planet.” For this reason, Eisenhower said, there needs to be a change in the “heart” of man.

In his farewell address to Congress in 1951, Gen. Douglas MacArthur said mankind’s problem is basically theological. We need to improve our character, MacArthur said. This is what leaders of old warned after we entered into the new age.

In his Hiroshima speech, President Obama did say that our modern advances needed to be accompanied by a “moral revolution.” Then he proceeded to speak of a world that is getting better and better—as if we are becoming more upright and moral with each passing day!

God says that in the latter days evil men and seducers would wax “worse and worse” (2 Timothy 3:13).

Just look at the many negotiations, institutions, treaties and peace talks we have had since the close of World War ii. And yet nations today still war against one another—and they are arming themselves for much bigger wars! China’s military buildup is alarming. Germany is calling for a European army. Pakistan is on the loose. And now you have Iran, the world’s number one state sponsor of terrorism, right on the cusp of becoming a nuclear threshold state.

In August 1945, only one nation had the bomb. Today, nine countries control 16,000 nuclear weapons. And many of these bombs are thousands of times more powerful than what America dropped on Japan 70 years ago. This is as good a time as any—seven decades after Hiroshima—to remember just how horrific nuclear weapons really are. And they will be used again—your Bible says so—and it will be far worse than what happened at the end of World War ii.

The war in the Pacific was so horrific that the world was in jubilation in August 1945—not because atomic bombs killed 100,000 people, but because it finally brought that nightmare to an end. The world on Aug. 9, 1945, was cheering the end of what had been the worst war of human history.

Jesus Christ said that the world war just before His return to this Earth would be so bad, if not for God’s intervention, man would destroy himself. That wouldn’t even be possible were it not for nuclear weapons. Can’t we see where this is heading? The last world war ended with the use of two atomic bombs. Think about a world war that starts with nuclear bombs. This is exactly what Jesus Christ described in Matthew 24.

“Is the crowning achievement of technology and science and massive governmental production going to be the Frankenstein that will destroy us all and blot out all humanity?” Herbert Armstrong asked in 1983. “World leaders are bewildered,” he continued. “I talk to many of them. Perhaps I’ve talked to more in their own home offices than any other man alive recently. They’re absolutely helpless. They have no solutions. They are bewildered. They don’t know how to face the future. Why?”

As technology gets better and better, evil men wax worse and worse. Is this really progress?

In insisting that the world is better today than ever before, that it is improving, Mr. Obama overlooks the most important lessons from Hiroshima. Mankind now has the power to obliterate every human being on Earth!

It’s important for us to understand that God is allowing all of this to happen so that mankind will consider his ways and turn to God.