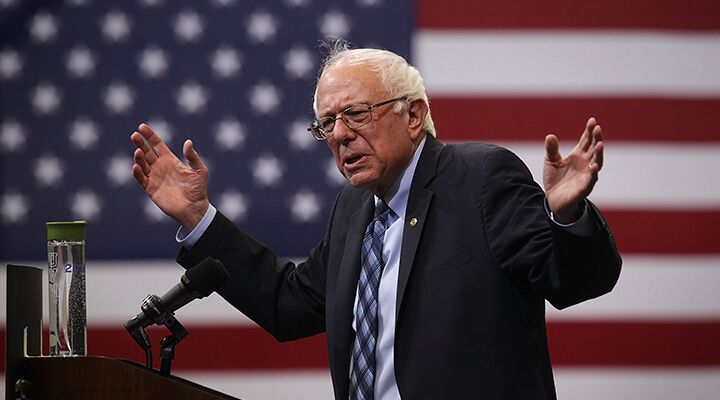 All the territory needs is a little more socialist love and a little less austerity.

Bernie Sanders took his campaign message to Puerto Rico on Tuesday. He told an audience, “If elected president of the United States, you will have an ally in the Oval Office.” But what exactly does that mean, and how would he help the debt-beleaguered island territory?

Earlier this month, Puerto Rico defaulted on $422 million in debt payments. Gov. Alejandro García Padilla says it will soon default on more unless Congress agrees to a bailout or some sort of debt restructuring. The island territory owes approximately $78 billion that it cannot pay.

But the island’s debt woes are actually much worse than reported. Puerto Rico has also promised pensioners and retirees $34 billion in contributions that it has not made. This is money that its citizens are relying on. Add it all up and the tiny island has borrowed and spent—and now owes—an astounding $100,000 per working person.

Consequently, Puerto Rico would like to go bankrupt. That would leave it more money to pay retirees and provide other government services. The problem is that it cannot legally do so. By law, its debts must be paid. So technically, there is no choice for the island—it is stuck paying back what it borrowed.

Yet reality is making a mockery of impossible-to-enforce laws. Puerto Rico simply doesn’t have the money to pay its debt and provide basic social services. With its economy in economic free fall, it is irrelevant what the law says—the debts simply can’t be paid. So they won’t.

For decades, Puerto Rico lived beyond its means, borrowing far in excess of taxes collected. Now that the island has defaulted, it can’t borrow any more. Investors have cut it off.

Without the short-term stimulus of additional deficit spending that the island is used to, economic conditions are deteriorating fast. This is a process that will continue until Puerto Rico hits a point where its standard of living matches its income-generating means.

The affluent, debt-fueled years are over—and a future of scrimping, saving and austerity has arrived.

Unless Bernie Sanders has his way.

“I’m not going to lower the standard of living of the people in Puerto Rico so that billionaires can have more profits,” he told voters. “It is unacceptable that venture capitalists are buying Puerto Rican bonds at a fraction what they cost and they expect 100 cents on the dollar. Together we will not allow that to happen.”

Instead of talking about how Puerto Rico got itself into the problem in the first place, or why its leaders thought it wise that a small island of 3.5 million people borrow $78 billion, Sanders says it is the greedy capitalists who are the problem.

In a sense, Sanders is partially correct. There are some very rich people who will probably profit from this mess. And lenders lent money to Puerto Rico knowing there was a chance they would not get paid back (that is why they charged Puerto Rico a higher interest rate)—so it is only fair that they share in the pain. These lenders are lobbying Congress to give them special protection. But the Puerto Rican people also profited. They are the ones that borrowed such a huge amount of money, and enjoyed spending it.

“Austerity will not solve this crisis,” said Sanders. “We must vigorously oppose all efforts at austerity.”

Instead, he says he would fix the island by implementing a federally funded Medicare-for-all health-care system and free public college tuition. Additionally, he would use federal money to grow the renewable energy sector and cut Puerto Rico’s dependence on fossil fuels.

Sanders is absolutely right that dumping a whole lot of federal money into Puerto Rico will definitely have an impact. Billions of federal dollars will impact the economy. It will even create jobs. Unfortunately, it will not fix Puerto Rico’s problem.

None of the stimulus will be self-sustaining or permanent. It will just enable Puerto Rico to go back to the very socialist policies that got it into trouble in the first place—only this time they will be funded at the federal level, as opposed to the local. Puerto Rico will become a ward of the federal government.

Think of everything Puerto Rico has going for it. It is a beautiful tourist destination with wonderful beaches, rich history and architecture. It has lush rain forest and dry forest. It has minerals and had mining. The world’s largest rum distiller is also located on the island. Most importantly, Puerto Ricans speak English, are U.S. citizens, and have direct trade access to the most important economy in the world—the United States.

So what went wrong?

Consider what socialist policies did to Puerto Rico’s agriculture sector. By the 1930s, Puerto Rico was the biggest sugar producer in the United States, producing more than Louisiana. Then as a Federal Reserve Bank of Minneapolis paper notes, “In the middle 1960s, something amazing happened. Production collapsed.” Why this collapse? Puerto Rico’s socialists outlawed large farms and much of the mechanization that was happening on the farms. They also instituted high minimum wages for farm workers. This was supposed to help workers keep jobs. Instead it just made sugar farms unprofitable. The farms went out of business. The land laid fallow. And instead of workers earning low salaries (which the socialist government complained about), they ended up earning no salaries.

Similarly, in 1942 Puerto Rican officials nationalized every sugar refining factory on the island, making them “public utilities.” Instead of being for-profit businesses, they became wards of the state to be milked. And they were eventually milked to death. Today there are none left; the last refinery closed in 2000. Once a sugar king that exported sugar around the world, Puerto Rico became reliant on others for its basic sugar needs—from baking to distilling rum.

Puerto Rican authorities were equally successful in destroying the island’s coffee and tobacco industries. Today Puerto Rico produces less than a third of the coffee it did in 1961. It produces no tobacco.

And as the economy deteriorated, instead of cutting back government spending, leaders decided to borrow and tax more. Today the total commercial tax rate in Puerto Rico is 50.9 percent, which makes it the second-highest taxed nation in the Caribbean. Most of the Caribbean has tax rates about half of Puerto Rico’s. And even Governor Padilla says raising taxes further is out of the question. Every time they are raised, the government just receives less, he recently admitted.

And the island’s population is falling.

As one college student described it, “People who graduate from the university go straight to the airport and never come back.” The Independent calls it “the Island of Lost Dreams.”

But not if Bernie Sanders has his way. The socialist utopian dream can still become reality—just as long as Puerto Rico can stiff its lenders and the federal government comes to the rescue with a little more money.

But where is America going to get the money to bail out Puerto Rico? Doesn’t America already have a $20 trillion dollar debt? Hasn’t America promised another $60 trillion or so to various retirement and social welfare programs?

Where is that money going to come from? According to Sanders, from the evil “venture capitalists.” But isn’t that what Puerto Rico tried?

But most people don’t want to hear those solutions, because they require obedience to God’s laws.

God provides solutions to mankind’s problems. If only people would turn to Him.

The July issue of the Philadelphia Trumpet magazine tackles problems associated with this world’s financial systems and examines God’s economic system. The Bible provides answers—if only people would listen.