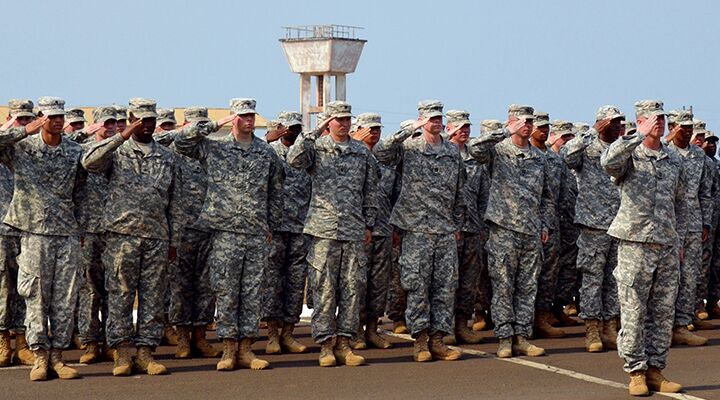 A tally of the number of troops in the United States Army at the end of March revealed an astonishing statistic: It’s the smallest it has been since 1940.

During the month of March, more than 2,500 enlistees ended their service, with no one to replace them. That brought the Army’s head count to 479,172 soldiers. Army Times reported that this is “154 fewer troopers than were on active duty when the Army halted the post-Cold War drawdown in 1999 with 479,424 soldiers, the smallest force since 1940, when the active component numbered 269,023 soldiers.”

For several years now, the U.S. military has been under the constraint of sequestration, a government-mandated reduction of costs and troop numbers. By September 30 of this year, the U.S. Army is expected to reduce its manpower to 475,000. With the net loss of over 2,500 troops in March and “barring unexpected delays, the Army is well positioned to achieve, or exceed, its budgeted end-strength of 475,000 soldiers by September 30,” the Army Times reported.

For the next three years, the Army is schedule to continue cutting the number of active troops. By 2018, the Army is slated to have only 450,000 troops. If that number is achieved, that would constitute a 20 percent reduction of manpower since 2010, when there were roughly 570,000 active troops.

While these cuts have been hidden under the guise of “responsible fiscal management,” the truth, in large part, is that the current administration no longer wants the United States to be the world’s policeman. In 2014, President Barack Obama told a crowd of cadets at West Point that while the United States remained an “indispensable nation” in fighting against terrorism, it couldn’t be counted on to be the one doing all the fighting. He went on to tell the cadets, “The military that you have joined is, and always will be, the backbone of that leadership. … But U.S. military action cannot be the only—or even primary—component of our leadership in every instance. Just because we have the best hammer does not mean that every problem is a nail.”

According to the president, the United States cannot be the one constantly taking the lead. This has led to the radical restructuring of U.S. military tactics abroad.

When the story broke in 2014 that the U.S. planned to cut troop numbers to pre-World War ii levels, the New York Times reported that the military was ordered to change its strategy. The Times wrote:

For years, and especially during the Cold War, the Pentagon argued that it needed a military large enough to fight two wars simultaneously—say, in Europe and Asia. In more recent budget and strategy documents, the military has been ordered to be prepared to decisively win one conflict while holding off an adversary’s aspirations in a second until sufficient forces could be mobilized and redeployed to win there.

But now, two years on, military leaders are sounding the alarm that even this strategy is unattainable. Army Chief of Staff Gen. Mark Milley stated recently that he had “grave concerns” regarding the military’s ability to fight two wars with great powers. While he stated that the military currently had “good, current capability and capacity” to combat terrorism, he said the military was totally unprepared to fight against nations such as Russia, China or Iran, much less two of them. He said, “I think the cost, both in terms of time, casualties in troops, and the ability to accomplish military objectives would be very significant, and we’ve all given our risk assessments associated with that in a classified session.”

Today’s American soldier is by common consent the world’s finest, even history’s finest, but the United States doesn’t win its wars. Time and again, the mission—the overall aim of the exercise—goes unaccomplished, while the war itself continues as if on autopilot. Why?

(A chapter in our book He Was Right has a similar title: “America Has Won Its Last War.” Request your free copy today.)

The U.S. still has the largest military budget in the world. It is nearly three times larger than China’s budget, the second-largest in the world. Despite all this money, the U.S. has failed for more than 60 years to effectively defeat its enemies in a ground war. North Korea withstood America’s might; so did little Vietnam. Twice Iraq has been invaded, along with Afghanistan. Even the island of Cuba turned America back.

While it has become popular to blame the failings of America’s military on the politicians in control, Bacevich points to another group of people who are more deserving of blame: the American people as a whole.

The American public has been quick to criticize the overseas wars of the previous decade, yet not many have been quick to fight! As Bacevich pointed out, America’s military organization as an all-volunteer force “leaves it to ordinary Americans to decide how much wars, such as Iraq and Afghanistan, should matter. Their limited willingness to volunteer suggests their answer: Not much.”

The conclusion Bacevich reached is exactly what so many scriptures in the Bible point out: America as a whole has lost its will to fight! It has all the physical power to crush puny nations like Vietnam, but it lacks the will.

The solution lies in ensuring that priorities and values align. At present, they do not. Stripped to its essentials, the prevailing definition of U.S. interests requires the United States to exercise global leadership, relying on superior military might to punish, pacify and police. Meanwhile, the prevailing definition of American values, emphasizing the uninhibited pursuit of life, liberty and happiness, increasingly centers on personal self-actualization.

And there’s the rub. America’s military is plagued from all sides: lack of funding, a leader unwilling to lead on the world stage, and a general populous increasingly absorbed in its own self-interests and unwilling to sacrifice for the good of the nation.

What is even more shocking than these developments is that Bible prophecy foretold all of them in striking detail. The Bible also explains why they are happening, and it explains the sure solutions for the United States. You can find these answers in Herbert W. Armstrong’s book The United States and Britain in Prophecy.