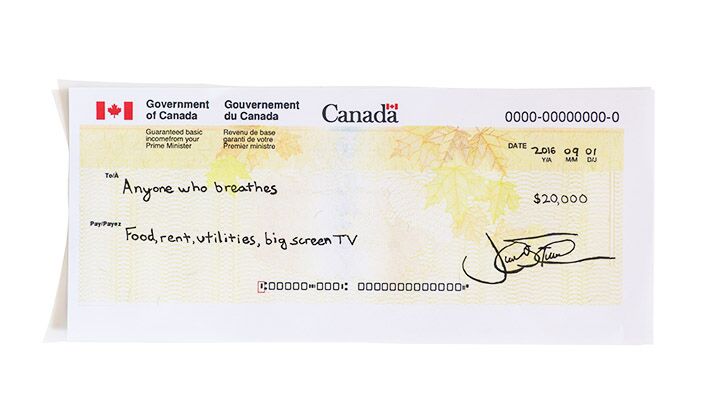 Is this a bogus scam or Canadian public policy? It’s both.

What if the government paid you just to exist? You could just sit on your couch year round, and paychecks would just magically arrive: $20,000 per year. Sounds like another fraudulent “make money from home” sham cluttering your e-mail inbox.

But Ontario is hoping to make this reality.

During its last budget, the Canadian province of Ontario announced that it will begin testing a guaranteed basic income scheme. It plans to send every citizen in a yet unannounced city a government check. Premier Kathleen Wynne said her government would “test a growing view at home and abroad that a basic income could build on the success of minimum-wage policies and increases in child benefits by providing more consistent and predictable support in the context of today’s dynamic labor market.” Canada’s freshman Prime Minister Justin Trudeau says he is interested in extending the concept nationally.

Supporters say that in an age of increasing technology where jobs are being replaced by machines and many people are unable to compete, the government must redistribute the wealth. They say basic income schemes will reduce welfare budgets by simplifying and eliminating bureaucracy. All other welfare programs—food stamps, housing aid, utility supplements, etc.—will be replaced with a single lump check to each citizen to spend as they please.

But who is going to pay for it? Advocates say high-income earners and corporations should pay a little more to the government, then the government can finance the lives of its citizens. Forget that higher taxes means slower economic growth, which means fewer jobs, which means higher unemployment. After all, who needs to work when you get a government check?

How many people would keep working if they could instead go fishing or watch movies all day?

Don’t worry, say advocates—there is no proof free money leads to laziness. In fact, one project conducted during the 1970s in Dauphin, Manitoba, found that people actually become healthier when they were given free money. The government cash resulted in fewer work-related injuries and emergency room visits due to car accidents or domestic abuse. There were also far fewer mental-health-related visits to doctors. The researchers aren’t quite sure why it happens, but it does, they assure us.

Another study found that giving parents of poor children an extra $4,000 per year caused the children to have fewer behavioral and emotional disorders. It made them more conscientious and agreeable. Again, researchers don’t understand the connection, but they know it’s there.

And to top it off, every place on Earth where a basic income has been tried, it has been a resounding success. The Independent cites two villages in India and “some parts of South America” that were “all successful.”

So now our eyes are on Ontario. But other nations are experimenting too. Switzerland is set to vote on adopting a basic income: $2,500 per month for adults and $625 for children. Denmark, Finland and the Netherlands have similar schemes in various stages of planning. Even in America, home of individualism and free-market capitalism, the calls for a basic income are growing. What is free college and paying off student loans, if not a free government check?

Former United States Labor Secretary Robert Reich says a basic income scheme “would allow people to pursue whatever arts or avocations provide them with meaning, thereby enabling society to enjoy the fruits of such artistry or voluntary efforts. We would thereby create the kind of society John Maynard Keynes predicted we’d achieve by 2028—an age of technological abundance in which no one will need to work” (emphasis added).

Won’t it be great if no one has to work?

You can know the answer if you have a basic understanding of human nature. How many parents give their kids several hundred dollars per month, regardless of what they do, to spend on their hearts’ desires? Responsible parents know what the obvious result would be. They want their children to learn that success and failure is related to drive, resourcefulness, education, being goal-oriented, health and perseverance. They want their children to be happy—but they know that financing a life of license and leisure is the straight path to the rehab center or correctional system.

Common sense is backed up by the Bible, which teaches that work is an essential aspect of social development and character building. King Solomon warned that poverty comes to those who don’t work hard (Proverbs 6). The Apostle Paul wrote, “If you don’t work, you don’t eat.” In 1 Timothy 5:8, he writes that if a man doesn’t provide for his own household, he has denied the faith.

When we depart from biblical principles, disaster ensues. That’s a law that can’t be avoided. True at the personal level, it is amplified at the national level.

This grand experiment called the basic income scheme will not produce more prosperity or happiness. It is guaranteed to produce the very kinds of social ills society wishes to avoid. Even if you really, really want there to be one, there is no such thing as a free lunch. A “free” basic income will come at a very high cost.