What Iraq, and the whole world, can look forward to! 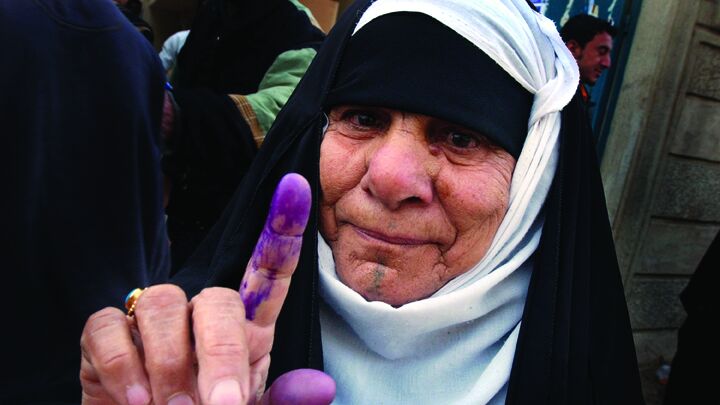 What Iraq, and the whole world, can look forward to!

How could anyone, even the most hardened cynic, not be moved by the spirit of brave Iraqis who risked their lives to cast a vote in their country’s first free election in more than 50 years? “The victims of election day violence are being hailed by many Iraqis as the latest martyrs,” Edward Wong wrote in the New York Times (February 2). “They were policemen who tried to stop suicide bombers from entering polling centers, children who walked with elderly parents to cast votes, or—in the case of [Naim Rahim] Yacoubi—a fishmonger who, after voting, took tea from his house to electoral workers at the school.”

Islamic terrorists carried out their pre-election threat and murdered at least 50 Iraqis that day, but that didn’t stop 58 percent of Iraq’s registered voters from defiantly casting their ballots. (Voter turnout in America last November also hovered around 60 percent—and that with no threat of violence.) “At polling centers hit by explosions, survivors refused to go home, steadfastly waiting to cast their votes as policemen swept away bits of flesh” (ibid.). In the end, tens of thousands of Iraqis danced in the streets, wagging their ink-stained index fingers before cameras, celebrating their new birth of freedom.

We applaud their courage in the face of deadly danger. We admire their longsuffering and hope-filled patience after decades of abuse living under the boot of tyranny. And we acknowledge the tremendous benefit and blessing there is to living in a free and open society.

But while a free society is much to be preferred over despotism, the former has miserably failed to stop the spread of evil. In fact, as the Trumpet has often noted, our many “freedoms” are also responsible for promoting and distributing massive amounts of evil, like greed and pornography. We have also failed to stop, or even slow, the spread of violence and war, famine and disease, illiteracy, poverty, suffering or misery.

True freedom is much more than a world without Saddam Hussein. In the Bible, God represents freedom as the absence of sin (read all of Romans 6).

In today’s world, however, it is sin—not freedom—that is on the march. As pessimistic as the Bible’s short-term forecast might seem, it is, nevertheless, true: the worst is yet to come (2 Timothy 3:13).

A newly elected government in Iraq might make this temporal life more pleasant for the average Iraqi. But even if democracy were to spread to every nation on Earth, it would not solve the problems of this world. Democracy won’t help educate half the people on Earth who are illiterate. It won’t bring fresh water to 1.2 billion people who don’t have it. It won’t tighten the ever-widening gap between the rich and poor. It won’t even solve the problems facing a new and free society within Iraqi borders.

No man-made government will!

The only government capable of bringing this world lasting peace and prosperity—of spreading freedom to all corners of the Earth—is the perfect administration and rule of Jesus Christ and the saints of the Most High!

This is where Bible prophecy overflows with optimism! When Jesus returns—as He promised He would—the kingdoms and governments of this world will become His (Daniel 2:44; Revelation 11:15). He will then rule all peoples, in every nation, with compassion, justice, mercy—in perfect love and concern for the good and welfare of humanity. At long last, the way of sin will be purged from the face of this Earth. All peoples will then be made free from sin and become servants of righteousness (Romans 6:18).

And yet, in stark contrast to the conditions put in place to establish a new government in Iraq, no human being on Earth will have a say in whether or not Christ should rule! He has already qualified for the position of world King. No one will vote Him into office. And no one will vote Him out—ever!

God’s government, to be set up by Christ when He returns, will be a theocracy. Rule will be administered from the top down. But it will be nothing like Saddam’s regime. In fact, it won’t be like any government man has devised.

It will be God’s government—for the people—but not of or by the people. If ever there was a government conceived in liberty and dedicated to the proposition that all men are created equal, as Abraham Lincoln once said, it will be this one: God’s family government.

It’s well worth sacrificing your life for it.