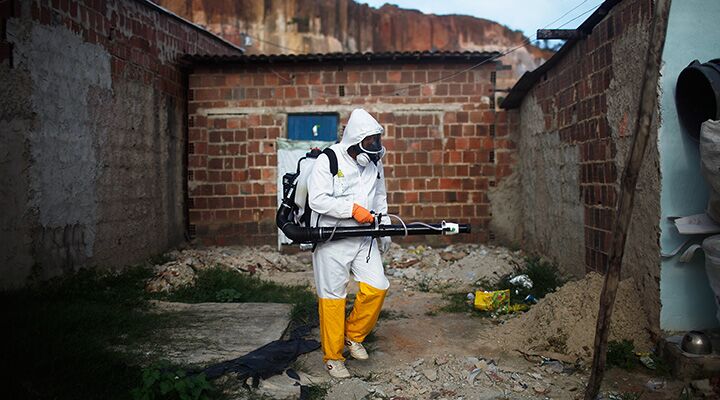 How do the Bible’s prophetic warnings about coming disease epidemics affect you?

The World Health Organization (who) has declared the Zika virus a “public health emergency of international concern.” The virus is linked to the fetal deformity microcephaly (which can cause neurological defects and seizures), of which there are now over 4,000 suspected cases in Brazil.

Over 20 countries have confirmed cases of the Zika virus, with Brazil having an estimated 1.5 million. According to the who’s estimate, around 4 million cases can be expected by the year’s end.

Zika is spreading “explosively” through the Aedes mosquito, as well as through sexual intercourse. Brazil’s, El Salvador’s and Colombia’s governments have recommended putting off becoming pregnant for a number of months. Stratfor predicts lower birth rates could “hasten regional decline.”

“Lack of vaccines and rapid and reliable diagnostics tests,” plus the “absence of population immunity in newly affected countries” are “cause for concern,” according to who Director-General Dr. Margaret Chan.

American and British authorities have issued travel warnings to affected countries, and a number of blood donation operators have put temporary bans on travelers supplying blood.

For those familiar with Bible prophecy, widespread fear of a global pandemic brings to mind the image of the pale, or sickly, horse of the four horsemen of the apocalypse, as described by the Apostle John in the book of Revelation.

The first three horsemen of the apocalypse symbolize religious deception, war and famine. Along with the fourth horseman, pestilence, these riders represent the end-time culmination of the most traumatic problems endured by a rebellious mankind. They picture one of the most ominous scenarios ever.

“And when he had opened the fourth seal, I heard the voice of the fourth beast say, Come and see. And I looked, and behold a pale horse: and his name that sat on him was Death, and Hell followed with him. And power was given unto them over the fourth part of the earth, to kill with sword, and with hunger, and with death, and with the beasts of the earth” (Revelation 6:7-8).

The key to the identity of the last horseman is the word pale, which often makes us think of someone who is feeling sick, having an anemic-looking appearance. Pale is translated from the Greek chloros, which we would normally take to mean the color of chlorophyll, the property that gives plants their healthy green appearance. When used biblically, however, chloros means the sickly pale green color of sickness and disease.

In Matthew 24, Jesus Christ unlocks the true identity of this pale green horse: “and there shall be … pestilences” (verse 7). The man on the pale horse symbolizes climactic, globe-encircling plagues and pandemics occurring and soon to occur in this modern age!

The only reason for this type of extreme punishment is man’s unabated rebellion against his Creator God. “As it is written in the law of Moses, all this evil is come upon us: yet made we not our prayer before the Lord our God, that we might turn from our iniquities, and understand thy truth” (Daniel 9:13). The book of Daniel is prophecy for this end time (Daniel 12:4, 9).

Let’s examine Deuteronomy 28 (part of the law of Moses) and add modern-day expressions to see more clearly how this warning applies to our time now. “But it shall come to pass, if thou wilt not hearken unto the voice of the Lord thy God, to observe to do all his commandments and his statutes which I command thee this day; that all these curses shall come upon thee, and overtake thee …. The Lord shall make the pestilence cleave unto thee, until he have consumed thee from off the land, whither thou goest to possess it. The Lord shall smite thee with a consumption [chronic, degenerate diseases such as aids], and with a fever, and with an inflammation [malaria or communicative diseases such as influenzas], and with an extreme burning, and with the sword, and with blasting, and with mildew … with the botch of Egypt [elephantiasis], and with the emerods [tumors, cancer, etc.], and with the scab, and with the itch [aggravated psoriasis and other nutrient-deficiency diseases such as scurvy, rickets, etc.], whereof thou canst not be healed [incurable or drug-resistant diseases] … with madness [mental illness, insanity] and blindness, and astonishment of heart [emotional distresses such as depression]” (Deuteronomy 28:15, 21-22, 27-28).

Verse 29 graphically depicts the utter hopelessness of mankind suffering from these and the many other innumerable scourges of our generation.

In America, health care remains a controversial subject among lawmakers. Billions of dollars are spent annually. We have too many problems already to try to satisfactorily deal with new ones that seem to pop up without warning. To make matters worse, we live in a small world. And what about the prospect of blatant terrorist attacks that damage air, soil and water quality?

Millions are prophesied to die because they fail to heed God’s warnings to turn to Him with the type of contrite attitude necessary to please Him (Isaiah 66:2). God wants true repentance—a turning away from the carnal “human nature” that we possess to the spiritual nature God originally intended us to develop.

Beyond the suffering, however, Jesus Christ is returning to this Earth to bring all the joy and happiness man has continually sought after! God will mercifully end the deadly sweep of the four horsemen just before they eradicate mankind from the Earth.

The Zika virus may not grow to pandemic levels, but disease epidemics are certain to come. For more on this fourth horseman of the apocalypse, as well as the other three, read our free booklet The Four Horsemen of the Apocalypse.