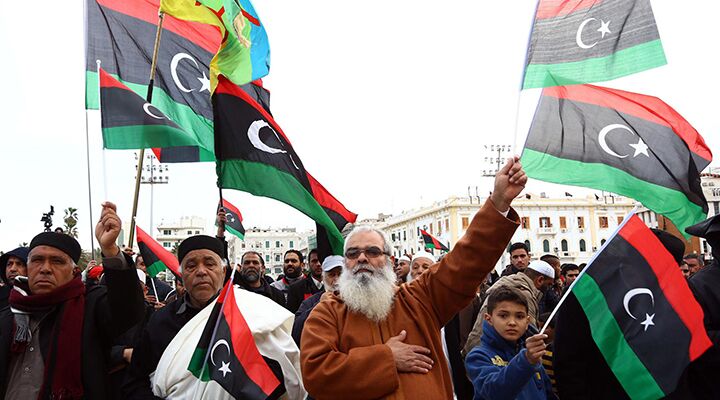 The Islamic State is strengthening its forces in Libya. Hundreds of terrorists are coming from Syria and Iraq, plus a number of local jihadist groups who have announced their alliance to the terrorist group.

Following the ouster of Libyan dictator Muammar Qadhafi in 2011, the nation has become the battlefield for a number of competing factions and numerous jihadist groups. Amidst the turmoil, the Islamic State has gained control of a number of coastal cities, including Sirte, Bin Jawad and previously Derna.

Recent American intelligence identified at least 500 Islamic State terrorists moving into Libya. A November United Nations report estimated that there are around 3,000 terrorists currently in Libya. The Libyan Center for Terrorism Studies puts that number around 10,000.

Most of the Islamic State fighters in Libya were recruited from the Ansar al-Sharia militia in early 2015. In recent weeks, two other groups switched their allegiance to the Islamic State: the Ajdabiya Revolutionaries Shura Council, in Ajdabiya, and a second terror group in Misrata.

The Washington Free Beacon reported that a U.S intelligence official confirmed “the [Islamic State] is expanding in Libya,” but not necessarily because “of the stepped up counterterrorism operations in Syria and Iraq.”

Libyan officials say the Islamic State has targeted oil fields around Sirte. Since the beginning of the year, two of Libya’s largest export terminals—Es Sider and Ra’s Lanuf, which handle a large portion of Libya’s oil—were attacked and set on fire.

The Islamic State could be trying to gain control of Libya’s oil as a revenue producer, which it does effectively in Syria and Iraq. Disruption of oil production throughout the country would also benefit the Islamic State. The absence of a unified government in Libya has allowed the growth of the terrorist group, and the loss of much-needed oil revenue would further weaken the two largest opposing factions in Libya.

Finances are currently not an issue for the Islamic State in Libya. The United Nations report even indicated that “members of other groups … had switched to [the Islamic State] for financial reasons.”

Islamic State operatives are also in Benghazi and have carried out attacks in the capital city of Tripoli.

European governments close to the Libyan coast have been expressing their concern. Chairman of Italy’s Senate Foreign Affairs Committee Ferdinando Casini called for military intervention to prevent the Islamic State from spreading to Tripoli.

“The more the birth of a government is delayed, the more threats will multiply. Their number will be reduced only when the government takes office,” Casini told an Italian newspaper.

In the month of Qadhafi’s death, Trumpet editor in chief Gerald Flurry predicted that Libya would come under the influence of Iran. In his article “Egypt and Libya to Join Iran’s Terror Network” he wrote:

We are rejoicing about the overthrow of Libya’s Muammar Qadhafi, while we should be mourning. Libyan chaos is now the ideal setting for Iran to bring that nation into its deadly terrorist web.

Nearly five years later, chaos still abounds and terrorism runs rampant throughout the country. Keep your eye on the developments of the Islamic State within Libya, for it could be part of the catalyst that causes Libya to fall under the influence of Iran.