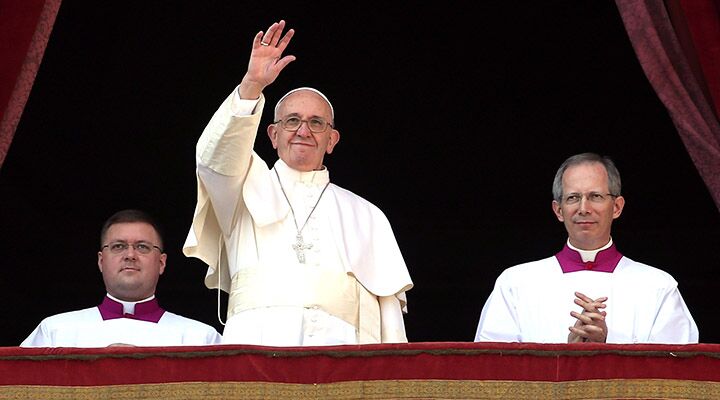 Pope Francis is to be awarded Europe’s top prize for promoting unity.

That news will come as no surprise to those familiar with theTrumpet.com. For years we have said that the Catholic Church must play a powerful role in European unity.

The European Common Market has “so far … been unable to bring about full political union,” wrote Herbert W. Armstrong in his book The United States and Britain in Prophecy. “This will be made possible by the ‘good offices’ of the Vatican, who alone can be the symbol of unity to which they can look.”

Few see the signs of the Vatican playing this role, so far. Many of Europe’s modern leaders are from Europe’s very secular, multicultural left. But now, as Europe is becoming increasingly desperate for unity—with the euro, the border-free Schengen zone, and even the European Union itself under threat—we’re seeing more signs that it will look to the Vatican.

The International Charlemagne Prize of Aachen will go to Pope Francis, the prize committee announced on December 23. The prize is given to those who perform “exceptional work … in the service of European unity.”

Typically the prize is given in Aachen, the capital city of Charlemagne, Western Europe’s first great Catholic unifier. But in a special departure from tradition, this year it will be given in Rome.

Europe has gone through seven years of “weaknesses, crises and setbacks” causing “a dramatic loss of confidence” wrote the prize committee. “In these times, in which many citizens in Europe seek orientation,” the pope “sends a message of love and encouragement,” it wrote.

The Charlemagne Prize’s website states that the award’s recipients “are the people who most often work toward integration—and who are able to exercise a political influence.”

The prize is a timely reminder of the Catholic Church’s deep, but little noted, ties to the European project. Most of the EU’s “founding fathers” were staunch Catholics. To men such as Jean Monnet, Robert Schuman, Alcide De Gasperi, Otto von Habsburg and Konrad Adenauer, the European project was as much a religious ambition as it was a political ambition.

At the same time, the Catholic Church put its religious and political backing behind the project. In 1962, Topic, a prominent magazine in Britain at the time, wrote: “The Vatican, usually cautious over political changes not of its own inspiration, now considers the Common Market the work of divine providence. Not since the times of Spain’s Charles v has a Roman Catholic political force been so strongly welded. Not since the end of the Holy Roman Empire has the Holy See been offered a Catholic rallying point like the Common Market. If the ‘Pact of Rome,’ which created the Common Market, had been signed within the Vatican walls, it could not have favored the church more.”

The church is in the process today of canonizing both Schuman and De Gasperi. If it goes through, it will be the first time the church has canonized a secular political leader in hundreds of years.

Pope John Paul ii was the first pope to be given the Charlemagne Prize, awarded just before his death in 2004. He is the only person to ever be given the “Charlemagne Prize Extraordinary.” His award focused on his role in defeating communism, allowing Eastern and Western Europe to come together.

Pope Francis has merely continued the policy of many of his predecessors.

The Economist magazine writes that “the selectors are adamant that Pope Francis, more than anybody else, has breathed new life into the construction of Europe at a time when that effort was sagging.”

In their announcement of the pope’s selection, the award committee quoted from statements made by the pope directed at Europe—most heavily his 2014 address to the European Parliament.

Unity was the key focus of that parliamentary address. The pope said that he was there to bring “a message of hope and encouragement to all the citizens of Europe.”

“It is a message of hope, based on the confidence that our problems can become powerful forces for unity in working to overcome all those fears which Europe—together with the entire world—is presently experiencing,” he said.

“How, then, can hope in the future be restored, so that … there can be a rediscovery of that confidence needed to pursue the great ideal of a united and peaceful Europe?” he asked.

“I consider to be fundamental not only the legacy that Christianity has offered in the past … but above all the contribution which it desires to offer today, and in the future, to Europe’s growth,” he said.

While so many of the EU’s founders saw their work through a Catholic lens, many today do not. But at this crucial juncture, with Europe struggling for unity, it is the pope that is singled out as offering hope for the future.

And it is not just the Charlemagne Prize Committee that see this hope.

The Konrad Adenauer Foundation is the think tank for German Chancellor Angela Merkel’s Christian Democratic Union. In Germany, all the political parties have a think tank affiliated with them to help formulate their policy. In November, the foundation produced a paper called “Microstate and Superpower—The Vatican in International Politics.”

Its conclusion is clear from the title. “At first glance, the Vatican is a microstate without massive resources,” the authors write. “Be that as it may, it does have a great deal of symbolic power, not least thanks to it partially sharing its identity with a world religion, which makes it a superpower after all, religiously, culturally and socially.”

More specifically, though, they note the power of the Catholic Church as a mediator and a unifier.

The Vatican, they write, “has, in fact, been involved in central decision-making and events of world politics for a long time, acting patiently behind the scenes, particularly since the middle of the 20th century.”

The lengthy, but fascinating, paper goes through example after example, from the Cold War right up to the present day where the Catholic Church has established itself as a mediator.

Representing a “third way between liberalism [that’s classical liberalism, rather than what Americans would call liberalism] and Marxism” the Vatican has developed considerable “soft power … based on its reputation as an honest broker, a role whose impact has been increasing since the end of the Cold War.”

Even beyond that, the foundation writes that “there are clear indications of efforts being made under Pope Francis’s leadership to reach out beyond the faith by putting forward ethical-universal arguments rather than Catholic-moral ones. … Consequently, the Holy See is developing into an informal authority on moral standards reaching far beyond the boundaries of Catholicism.” The pope is now reaching out to the world “not just as head of the church and head of state but as a moral authority,” it writes.

As unity is becoming an increasingly desperate need for all of Europe, the think tank for Angela Merkel’s party is considering the Vatican’s track record of bringing such unity.

Europe’s crises are far from over. As times get dark, this hope for unity held out by the Vatican will burn even brighter and gain even more attention.

The historical precedent for this source of unity goes far beyond the EU’s founding fathers. The Charlemagne Prize is certainly an appropriate award for the pope—Charlemagne also used the Catholic Church to bring unity to his empire 1,200 years ago. Charlemagne, or Charles the Great, brought a good chunk of the Continent together as one empire, and he did it through the help of one church.

As the Catholic Encyclopedia noted, Charlemagne’s legacy was “the idea of a Europe welded together out of various races under the spiritual influence of one Catholic faith and one vicar of Christ ….”

This is the heritage the Charlemagne Prize deliberately revives, and it’s one European leaders are very familiar with. History shows them that the road to European unity goes through the Vatican.

That same history can also show us where that road eventually leads. To read about the heritage Europe is drawing on right now, and where this joint venture with the Catholic Church will lead, read our free book The Holy Roman Empire in Prophecy.