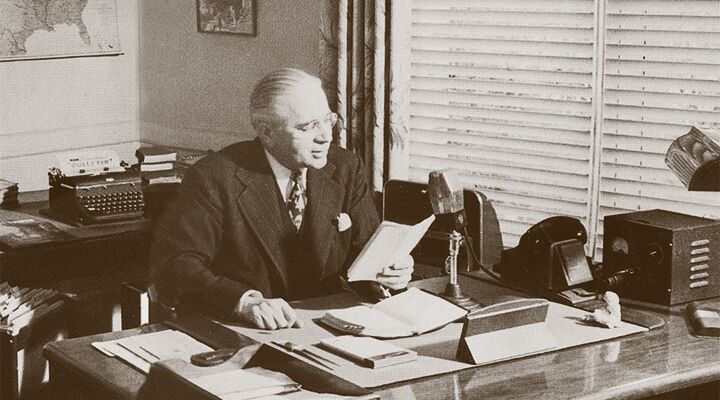 “Prophecy shows 10 kings … will arise in Europe and give their power to Germany.” Herbert W. Armstrong made that statement in a letter in 1962—54 years ago.

Even at the end of World War ii, when Germany was reduced to rubble, Mr. Armstrong was forecasting that Germany would rise again to lead a union of nations in the territory of the old Roman Empire.

How did he know this United States of Europe would spring up in our time? He knew because it is revealed in Bible prophecy.

You could say this was the signature prophecy of Herbert W. Armstrong’s 50-year ministry.

The current crises facing Europe have caused many prominent voices to demand radical changes. Many are calling for the European Union—currently 28 nations, 19 of which comprise the eurozone—to be reduced to a core of about 10 nations. Some are even using the same label Mr. Armstrong did 50 years ago: a United States of Europe!

Isn’t it remarkable that statements in today’s news are so similar to those Mr. Armstrong made decades ago?

In an article last March titled “‘The Fourth Reich’: What Some Europeans See When They Look at Germany,” Spiegel explained that reich means empire and denotes a central power exerting control over people. With that in mind, the view of Germany today as the Fourth Reich is understandable: Berlin is just using economic power instead of military force to impose its will on Europe.

Revelation 17 describes in vivid detail this seventh and final resurrection of the Holy Roman Empire. “There is going to be a resurrection of that old Roman Empire. Not very many people believe it because people have gotten completely beyond really believing the Bible means what it says,” Mr. Armstrong said over 50 years ago. “You’re going to have to live and see it, and you’re going to have to know that God was speaking when He said that this thing was coming.”

Emperor Justinian recognized the supremacy of the pope in a.d. 554. Thus, when we come to these prophesied resurrections in Revelation 17, there is a whorish “woman” straddling this resurrected Roman “beast.” This great false church, described in Revelation 17, heavily influences and rules over the political empire. It is an unholy union of church and state.

“So he carried me away in the spirit into the wilderness: and I saw a woman sit upon a scarlet coloured beast, full of names of blasphemy, having seven heads and ten horns” (Revelation 17:3). These seven heads and 10 horns are the biblical terms used to describe the Holy Roman Empire in its seven specific stages, culminating in the final union of 10 nations, or groups of nations, at the end of this age. Here the Bible is plainly speaking of a great political beast rising in Europe, which will be led by a great European religious beast in an unholy alliance that sets out to conquer the world.

These seven successive resurrections of the Holy Roman Empire would have lapses in between, pictured by the mountain peaks and valleys in Revelation 17. As H. G. Wells wrote in The Outline of History,”The Roman Empire staggers, sprawls, is thrust off the stage, and reappears, and … it is the Church of Rome which plays the part of the magician and keeps the corpse alive.”

The 10 horns mentioned in Revelation 17 are part of the seventh head. These 10 horns are 10 heads of state in Europe that will join together 10 nations or groups as part of the final resurrection of the Holy Roman Empire.

Notice what one popular writer in Britain, known by the pseudonym Archbishop Cranmer, wrote in 2011: “The European Union is essentially the recreation of the old Empire of Charlemagne: from the moment the Treaty of Paris was signed in 1951, the European Coal and Steel Community bound together the economic and political destinies of France and Germany.” This commentator recently recognized this—but who besides Mr. Armstrong was writing about it more than 50 years ago?

The Bible prophesies that this final resurrection would continue for a short time—only 2½ years. This seventh and final head of the Holy Roman Empire will lead directly to the Second Coming of Jesus Christ.