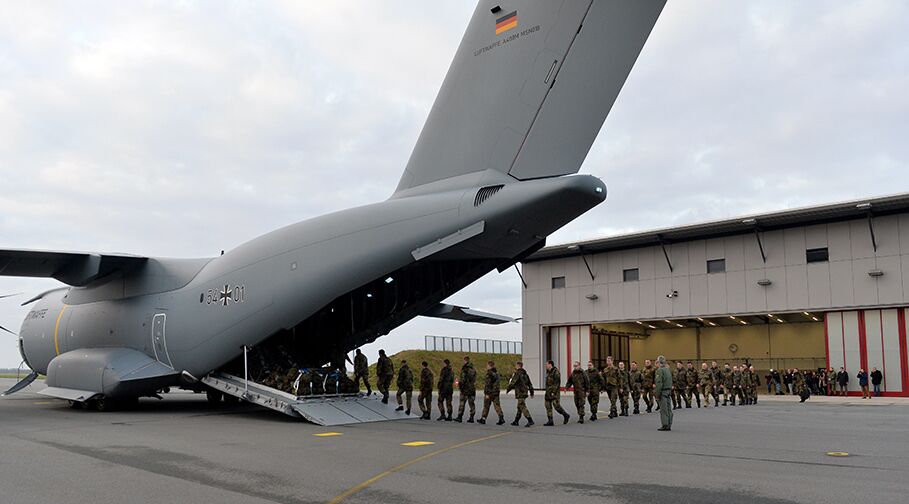 Never in postwar history has Germany responded so quickly and strongly as it has to the Paris attacks.

Three weeks to the day after the attacks, Germany’s parliament approved a military mission to Syria of up to 1,200 soldiers and a deployment of up to 650 extra troops to Mali.

That is Germany’s fastest and biggest initial response to a crisis in decades. In December 2001, three months after the September 11 attacks on America, its parliament approved a mandate for up to 1,200 soldiers to join America in Afghanistan. When Mali was in crisis and appealed for help, it took two months to approve a mission of only 300.

Germany now has four major deployments of nearly 1,000 German troops each: in Afghanistan, Kosovo, Syria and Mali. This is the largest number of simultaneous deployments of this size that Germany has engaged in since World War ii.

Of course, it’s important not to oversell the mission. Islamic State leaders will hardly be shaking in their boots to learn that Germany is sending to Syria a frigate and a handful of aircraft—which will be carrying cameras, not bombs. Nonetheless, it shows the new seriousness in German foreign policy—a Germany that has discarded its former restraint in deploying its army abroad. Germany is still far from being a global military power, but it has just taken a significant step in that direction.

And not since World War ii have the German media been so keen on military missions.

Frankfurter Allgemeine Zeitung editor in chief Berthold Kohler described the war against the Islamic State as “a world war.” The message of the Paris attacks, he noted, is that “your efforts and sacrifices in the ‘war on terror,’ whether on foreign soil or on your own, have been in vain” (Nov. 15, 2015; Trumpet translation throughout). The way the West is fighting radical Islam simply isn’t working.

“Germans are not opposed to a friendly face in their government. But at times like this, they want and need to see a different one: a tough one,” Kohler concluded.

“This is war,” Frank Jansen wrote in Der Tagesspiegel. “The images of last night are so horrible, so unfathomable, so archaically bloody that it seems impossible not to recognize what we, the West, and indeed the whole planet have been forced into: a third world war.” French journalist Anna Erelle told weekly German newsmagazine Stern in an interview that “we are in the middle of World War iii” (Nov. 16, 2015). Erelle is a pseudonym. After she wrote about the Islamic State’s recruitment practices, Islamic clerics pronounced a fatwa—a religious death sentence—on her. She now has to live in hiding.

German leaders and the German press publicly acknowledge the threat of radical terror far more than do leaders of Britain and the United States. They are earnestly discussing confronting Islamic terror across Africa and the Middle East, while U.S. President Barack Obama insists that, fundamentally, America’s strategy is working. Meanwhile, German authorities are emphasizing the need for a widespread war to contain the Islamists.

A Ring of Fire

Chairman of the German Federal Armed Forces Association Lt. Col. André Wüstner said that the November terrorist attack in Mali’s capital “makes it clear once again” that a “ring of fire” extends “from Afghanistan via Yemen, Syria and Iraq to Africa.”

“It is not enough to tackle the [Islamic State] in Syria,” he said, calling for “robust, battle-powerful forces” to be stationed in Mali.

Roderich Kiesewetter, president of the association of the Bundeswehr reservists and foreign-policy expert for Angela Merkel’s Christian Democratic Union, stated “firmly” that “the Bundeswehr will send more than 1,200 soldiers in the anti-[Islamic State] fight.” nato will have to send ground troops into Libya, he explained, noting that “the German Air Force, Navy and German police officers can help to stabilize Jordan, Lebanon and Libya.”

Former inspector general of the Bundeswehr Harald Kujat had a similar message, warning that even if the West destroys the Islamic State in Syria and Iraq, it “will not be totally defeated.” Instead, it will “dodge.” Kujat warned that the Islamic State is already setting up shop in Libya, and it is spreading into Mali.

A clear consensus is emerging from the leaders involved in military decision-making: Germany’s military must confront radical Islam across a range of battlefronts stretching from northwestern Africa to Afghanistan and Central Asia.

Trumpet editor in chief Gerald Flurry described exactly this response in our July 2013 edition. Germany sees the rising threat of radical Islam and is “planning for the bigger war to come,” Mr. Flurry wrote. The nation’s response? A “whirlwind strategy” is to surround radical Islam and prepare to confront it.

Arguing that Germany must confront radical Islam across a “ring of fire” exactly describes this strategy.

This strategy also explains Germany’s presence in Mali. What Germany is doing in Mali lies somewhere between building a military outpost and launching a wholesale takeover of the country. It’s part of a bid to cement Mali as the anchor of Germany’s whirlwind strategy in the region.

Germany has approximately 200 soldiers stationed in Mali as part of a European Union training mission, with parliamentary permission for up to 350. It now has a mandate for another 650 as part of a United Nations mission. That’s a serious presence—close to 1,000 soldiers—for a country that has been reluctant to send its troops abroad after its Nazi days. It also shows some serious commitment from Germany. Mali is one of the UN’s most dangerous missions.

France currently has around 1,000 soldiers in Mali, but it is expected to draw down that number once the extra German troops arrive. This will leave Germany leading the largest contingent of Western troops in Mali. Germany is currently leading the EU’s military training mission. It also heads up the EU’s civilian mission to train Mali’s police force. Despite this being a “civilian” mission, German soldiers are doing the training.

Lt. Col. Michael Hanisch of the Federal College for Security Studies, a think tank responsible for advising the German military, wrote that Germany’s plans would “mandate a new quality of … German military commitments in Africa.”

Germany’s military wants to use Mali as its main base in the Sahara—a point from which it can project power right across North Africa.

Mali plays a “crucial role” as a “source of conflict” and a “hub of refugee routes to Europe,” wrote Colonel Hanisch.

He wrote that German Defense Minister Ursula von der Leyen sees Africa “as the future focus of the German military commitments,” and this puts the focus on Mali.

“This is a major operation that cannot be limited to Mali,” Kiesewetter said in an interview with Deutschlandfunk, a German public radio station.

“It is important in the long term that we think of Libya,” he said on November 23. He also described how weapons and terrorism spread across the region, from Nigeria to South Sudan.

France has several military bases in African countries that it virtually controls, which it uses to project power across the region. Germany has apparently decided it wants the same setup in Mali.

Compared to the transformation of Mali into a virtual German protectorate, the Syria deployment is a little less dramatic, though still significant.

Once again, the German response taps into long-standing goals. The German Navy is very familiar with this part of the Mediterranean. Initially it led the maritime component of the United Nations Interim Taskforce in Lebanon, and it has remained involved as the leadership rotated to other nations. It has also been training the Lebanese Navy. The return of a German frigate to these waters is not surprising.

Germans have also deployed before on Turkey’s borders. The nation recently had a 200-strong mission to man two Patriot missile batteries, protecting Turkey from any missiles that could be flung its way from Syria. Now, Germany is looking to station around 550 soldiers in Turkey as part of its reconnaissance and air-to-air refueling mission in Syria.

All this will draw Germany deeper into the Middle East. At the same time, it will force the military to increase its combat readiness and logistical support. Over the last few years, Germany has launched a serious push to keep its forces in better repair and its personnel better equipped.

Germany’s postwar army was designed for one purpose: to throw as many tanks and men as possible up against a Soviet invader. Deploying and maintaining large contingents of troops hundreds of miles away from their home country requires an entirely different skill set. The fact that Germany is now able to maintain four separate deployments of nearly 1,000 soldiers each shows how much progress it has made here—and it will also force it to progress further.

Finally, Germany’s military leaders are indicating that Germany could get more deeply drawn into the conflict. General Kujat said that German troops would “not necessarily” be deployed on the ground in Syria, but that it is quite possible.

Colonel Wüstner said that the use of ground troops in Syria remained “a red line.” “However, we see these days how quickly the federal government can pass a red line,” he added. Will this Syria mission be the start of much more comprehensive German involvement?

Germany’s Future in the Middle East

The Paris attacks and the migrant crisis are prompting Germany to accelerate its whirlwind strategy. The idea that Germany is planning to effectively confront radical Islam has implications for everybody.

Currently, the Islamic State is the big name in radical terror. Many terrorist groups across the Middle East and North Africa have pledged allegiance to it. But these groups also have deep and long-standing ties with Iran. The Trumpet has long forecast that Iran would emerge as radical Islam’s leader.

From The February 2016 Philadelphia Trumpet
View Issue FREE Subscription
Next