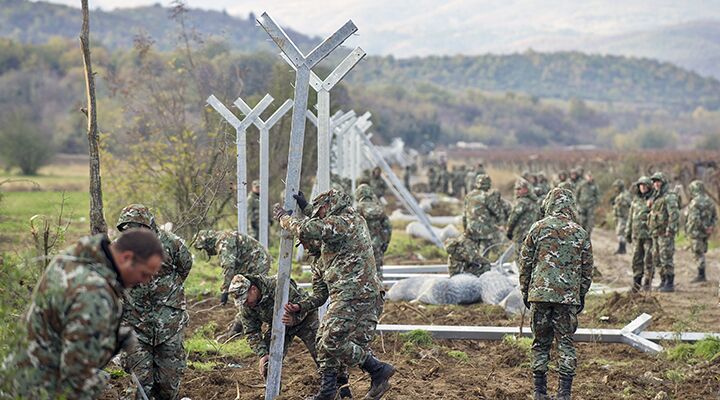 A smaller EU with its own army can already be seen on the horizon.

“Europe will be forged in crises and will be the sum of the solutions adopted for those crises.” Those famous words from one of the European Union’s founding fathers, Jean Monnet, explain much of what is happening in Europe. The economic crisis is forcing the political union that EU leaders could not get voters to agree to. And now, in the aftermath of the Paris attacks, new, major changes are afoot.

Externally, Europe is being forced into the Middle East. France’s decision to invoke the EU’s self-defense clause instead of nato’s will have major implications for the union’s defense arrangement.

But Europe is in an internal crisis too. The rise of the far right is triggering a political crisis—the latest expression being National Front’s rise in France.

But the most immediate crisis revolves around Europe’s borders—how to secure them, how to cope with immigrants crossing them, and how to stop terrorists moving all over Europe’s open-border zone.

This puts the Schengen zone—Europe’s free-travel area—at the forefront of this crisis. Since 1985, those living in France, for example, could hop across the German border to do grocery shopping, visit friends, etc. without having to queue up and show their passport. A whole generation of young people have spent their entire adult lives being able to travel around Europe as if it was one country. This has gone a long way toward creating those intangible bonds of people feeling more European, which is necessary to form the kind of union that the EU founders desired.

This free-border area is not the same as the EU. Britain sat it out, for example, fearing exactly the problems we’re seeing now—it didn’t want to rely on the Italians or Slovenians to secure its borders.

Since the Paris attacks, Schengen has unraveled. The combination of the attacks and the refugee crisis has led to the reintroduction of border controls in Germany, Austria, Slovenia, Hungary, Sweden, Norway, France and Malta.

Many now are wondering if those border controls will ever go away. “No government is as yet fully prepared to admit it, but the brief era of borderless travel through most of the European Union is over,” wrote Politico. The borders are shut, they explain, because “[t]heir citizens would not have it otherwise. They no longer trust ‘Europe’ to keep their streets safe.”

Border fences are even going up between Schengen members—something that goes far beyond a temporary suspension of border measures.

Now even top EU officials are talking about suspending Schengen for two years—which in practice means putting Schengen’s problems in the “too hard” bin and hoping a solution comes up later.

But Schengen is a core part of the EU, and greatly loved by pro-Europeans. They won’t let it die easily. How can their dream of a European superstate be realized if a passport is needed to travel within that state?

Just like the euro crisis, instead of giving up on the whole project, they’ll push for the opposite—fixing the problem through closer integration.

The solution capturing the headlines right now is a thinly disguised European army. Called the European Border and Coast Guard, the force would be armed and have its own ships, helicopters and drones. Most importantly, it could deploy anywhere in Europe without the target nation’s approval.

Such a dramatic expansion of EU power is a hard sell. Which is probably why the plans put forward by the European Commission call for such a small force—around 2,000. Anything much larger would be immediately shot down by member states.

But even such a small force would be a huge step. A Europe where a central government can send in armed forces—even if they’re called “border guards”—to another sovereign state is not a Europe of nation states. It’s a single superstate.

Schengen nations have already given up control of their borders. If approved, this plan would see them give up the right to control which armed forces enter their country.

Once approved, it would be relatively easy to increase the size of this proto-European army.

EU leaders discussed this plan on Thursday and Friday. Germany and France are in favor, and it’s easy to see why: Germany doesn’t have any borders with non-Schengen nations, so the border force would never be deployed there. Meanwhile Italy and other nations on the edges of the Schengen zone are generally against it.

Because this would mean such a huge loss of sovereignty, it would not be surprising if this plan is shot down in flames. But if so, it will be back. Migrants will continue to stream across Europe’s borders in 2016. There will be more terrorist attacks. The Schengen crisis will continue.

A powerful border force would help solve this crisis. A core problem is that Germany doesn’t trust Italy or Slovenia to decide who gets to cross into Europe’s, and therefore Germany’s, frontiers. A border force would remove the need for trust—Germany could send in this force to make sure these borders are secured itself.

Another alternative to a total Schengen collapse is the “mini-Schengen” plan. First circulated by the Dutch, this would see Schengen shrink down to a handful of nations—Germany, Austria, the Netherlands, Belgium and Luxembourg—a group that “bears a remarkable resemblance to the Holy Roman Empire in the late 18th century,” as Stratfor put it.

For Germany, for example, this makes a lot of sense. Germans don’t directly benefit from border-free travel with Italy. But they do like being able to go to Austria or the Netherlands without having a border checkpoint. And they feel they can trust the Austrians and the Dutch to control their borders—if for no other reason than because neither of them are on the Mediterranean. It’s a good way of retaining many of the benefits of Schengen without many of the risks. It would also be easier to get a smaller group of nations to agree to controversial proposals, like a Schengen border force.

This idea has gained traction very quickly. The Dutch, who take over the EU’s rotating presidency in January, floated it in November. Both the Netherlands and Germany have confirmed that they’ve held talks on the idea. Eurogroup head Jeroen Dijsselbloem said, “If we do not do it in the external borders of the EU’s 28 members, or in the Schengen zone, then maybe we will have to do it on the level of a mini-Schengen zone.” In December, EU leaders began threatening to kick Greece out of Schengen—a move that would also begin the process of shrinking Schengen.

Though it may not look like it at first glance, a mini-Schengen would also be a big step for Europe.

“If the spirit leaves our hearts, we will lose more than the Schengen,” said European Commission President Jean-Claude Juncker. “A single currency does not exist if the Schengen fails.”

He may be exaggerating a little, but the consequences of such a shrink go far beyond the common border zone. Until now, Europe has always moved forward and expanded. But if you can kick people out of Schengen, why not the euro? This reverses the direction for the whole EU. For the first time it would establish the principle that a group of European nations can shrink in the face of a crisis. If a small group of nations is a better fit for the Schengen zone, then why not shrink the euro too?

A practical force would push in this direction. It would be odd to have a zone with one currency but many borders. A common currency works best when goods, people and capital can move freely. The more obstacles there are to free movement, the more imbalances build up and the more unstable the whole thing becomes.

Just like a proto-army, this idea is not going away. If the crisis continues, it will continue to be floated.

Both these solutions to the Schengen crisis match exactly what the Trumpet has been forecasting for Europe—a smaller, more closely integrated group of nations. In these proposed solutions, we can see the outlines of what this new Europe will look like.

Regardless of whether these measures are adopted this time around, they reveal Europe’s instincts—the ideas they look to when a crisis hits. As these crises keep hitting, this smaller, more tightly knit group is the clear destination.

For more on why the Trumpet has been making this forecast, read “Is a World Dictator About to Appear?” from our free booklet He Was Right.