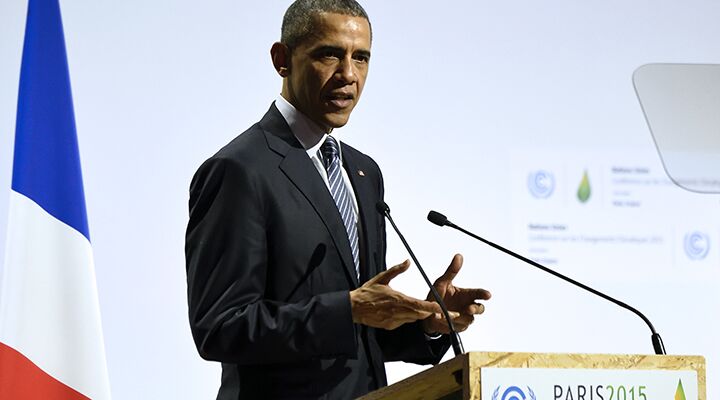 If you think the Paris climate talks are about carbon emissions and saving the planet, you have been duped.

United States President Barack Obama arrived in France Sunday night to attend the 2015 United Nations Climate Change Conference in Paris. In his opening speech he apologized to the world for how America has helped cause global warming. He said he personally came to the conference “as the leader of the world’s largest economy and the second-largest emitter to say the U.S.A. not only recognizes our role in creating this problem, we embrace our responsibility to do something about it.”

So what will America do about it?

The president encouraged the world’s leaders to stop burning oil and other fossil fuels, saying that the best way to combat Islamic State terrorism in Syria and Iraq is to sign a climate deal that will stop the world from warming. It would be an “act of defiance” against terrorism, he said.

But don’t be fooled: The Paris talks are not primarily about saving lives, preventing civil war, or stopping the Earth from warming. Perhaps the vast majority of people who believe in man-made global warming hope so. Many politicians would love for you to think so. But for most world leaders, the talks have little to do with preventing climate change.

The talks are, however, about money and power. They are about fomenting a revolution. And they are geopolitics at its most cutthroat.

In February, the executive secretary of the UN Framework Convention on Climate Change revealed the real motivation behind the Paris climate talks. She said: “This is the first time in the history of mankind that we are setting ourselves the task of intentionally, within a defined period of time, to change the economic development model that has been reigning for at least 150 years, since the Industrial Revolution. … This is probably the most difficult task we have ever given ourselves, which is to intentionally transform the economic development model for the first time in human history” (emphasis added throughout).

The Paris climate summit is about revolutionizing the world’s economic system.

And what system is that?

As Pope Francis said on Monday: The world is headed toward “suicide” if a climate agreement isn’t reached. “Africa is a victim,” he said. “Africa has always been exploited by other powers … there are some countries that want only the great resources of Africa. But they don’t think about developing the countries, about creating jobs. Africa is martyr, a martyr of the exploitation of history.”

As a result, Africa is “mired in poverty [and] social injustice,” he said. This has to change.

A dying world justifies extreme action, according to Pope Francis.

Capitalism has increased inequality and caused the destruction of the environment for “profit at any price” he told a crowd earlier this year. Capitalism is “the dung of the devil,” he said.

But the pope is just one force behind the Paris summit—albeit a powerful one.

Just take a look at the various climate-change protests taking place around the world. They are filled with anti-capitalist, socialist and increasingly openly Communist activists. And these people are not just hangers-on; they are the protest organizers.

“System Change, Not Climate Change” is the message behind this movement. Many call themselves “ecosocialists.” Click the above link and read the list of demands. Still think these people are not looking for a revolution?

What we are facing is a systemic problem. A conflict between two systems.First is the environmental system, which sustains life on Earth. Then there is the economic system of capitalism that is attacking the stability of our environment. Capitalism and a healthy environment cannot coexist! …[W]e’re going to have to disrupt and transform the capitalist system. That is why we say, “System Change, Not Climate Change”!

And who is the biggest purveyor of capitalism? Where is the home of the evil capitalists that needs to be destroyed?

According to mainstream environmentalists, America’s economic system is rooted in colonialism and slavery and based on exploitation. And it needs to be destroyed.

So it is more than odd that a U.S. president would so strongly embrace a movement whose stated purpose is to destroy the economic model that defines America’s way of life. It is this blatant anti-capitalism/ anti-Americanism purveying the climate-change movement that led previous administrations to reject the Koyoto Protocol talks and other environmental agreements.

But still, President Obama pushes for an agreement.

From a global economic perspective, this Paris summit will produce no winners. That’s because any deal would involve transitioning away from fossil fuels to more expensive green energy. The costs will be massive—in the trillions. And there is no guarantee they will be enough, or that the cuts will have any effect on the climate at all. And sadly, the poorest of nations will be coerced into borrowing vast sums of money from China and the West to build affordable green-energy projects. Once again, Africa and South America will send their resources north to pay for all the debt.

But there will be relative winners and losers.

The United States is an economic powerhouse. It is also an energy powerhouse. It is a world leader in terms of coal, oil and natural gas resources. Energy supplies are so abundant that costs are near multi-decade lows. Of the world’s 3 billion barrels of available petroleum inventories, more than 2 billion of those barrels are located in the U.S. according to the International Energy Agency. This inexpensive and abundant energy gives America a huge economic advantage over other nations. It keeps heating and transportation costs down, it fuels industry, and it subsidizes living standards. And perhaps just as importantly, the cost for all that oil, gas and coal stays mostly right at home in America—building the economy and providing jobs.

From a competition standpoint, limiting fossil-fuel usage makes little sense for America. But from a European perspective, it could be a big advantage. For resource-constrained Europe, fossil fuels are not only more expensive, but imported—meaning the money goes to the Saudis or Russians. This is part of the reason Europe has generally been quicker to embrace higher-cost, less-reliable green energy. It is just switching from one high-cost energy source to another one—only instead of sending euros to Russia for gas, it ends up sending them to Germany or Spain for wind turbines.

European businesses are already paying high-cost energy prices. In Germany, electricity costs are roughly three times the cost in America. If America wants to voluntarily handicap itself, so much the better from Europe’s perspective.

But what about the Chinese? If they agree to any deal to limit fossil-fuel emissions, will they actually follow through with their promises? And if they don’t, can anybody even do anything about it?

China imports a lot of fossil fuel at prices much higher than in the United States. So, like Europe, for them, there would be less of an economic hit to making a switch. Additionally, China has become the world’s premier solar manufacturing center. So reducing dependence on imported coal, for example, would come with the benefit of spending the freed-up money at home on domestically produced solar products. China is also becoming a leader in wind-power turbine manufacturing. So this industry would also benefit. Since smog pollution is a hot political issue in China’s big cities right now, there may be a desire to reduce the dirtiest forms of electricity generation in certain areas.

But there is no way China will sacrifice economic growth if that means reducing carbon emissions.

China has hundreds of millions of people who are very poor who cannot afford more expensive and less reliable electricity. According to the Institute for Energy Research, China is currently building one coal-fired power plant every seven to 10 days. Even if it slowed the construction of coal-fired power plants, it currently uses almost four times as much coal as the United States. And with China’s economy dramatically slowing, any switch will not be easy. In reality, China may not need to cut too much anyway. If the economic slowdown in China is as great as it appears, the fall off of manufacturing, and in particular steel production, could result in lower carbon emissions anyway.

Japan faces a bit of a conundrum following the Fukishima disaster. It has actually turned to coal to replace its lost electricity generation after shuttering much of its nuclear power plants. Will it reverse course and start building windmills?

Then there is India. India is currently against any agreement to limit carbon emissions. And India is the third-largest consumer of coal in the world. Coal-fired generation dominates the country’s power grid—and yet more than a third of India’s population still doesn’t have regular access to electricity. As TerraJoule.us editor Gregor Macdonald says, India has little choice but to embrace an “all of the above” strategy, including enormous steps to revive domestic coal production, to bring electricity to millions (June 2015).

Russia and the Oil Producing and Exporting Countries also have little desire to curb oil usage.

While rich countries may have the ability to pay to switch, much of the rest of the world does not. That is why much of the Paris talks revolve around how the West, and in particular America, would help pay developing nations not to use coal.

From an economic, geopolitical perspective, the Paris talks don’t make much sense for America. They do threaten America’s economy though.

We all like clean air. Pollution is not a good thing. And America has made huge strides in protecting the environment, especially when you consider that developments now regularly get stopped due to things like desert tortoises and Delhi Sands flower-loving flies.

But there is a danger in the global climate-change movement. This movement may once have been about improving the environment, and theoretically stopping ocean levels from swamping coasts, etc., but now it has morphed into something that seeks to completely upend the global economic system. And that means starting with America.