Those who underestimate Russia’s Vladimir Putin do so at their peril. 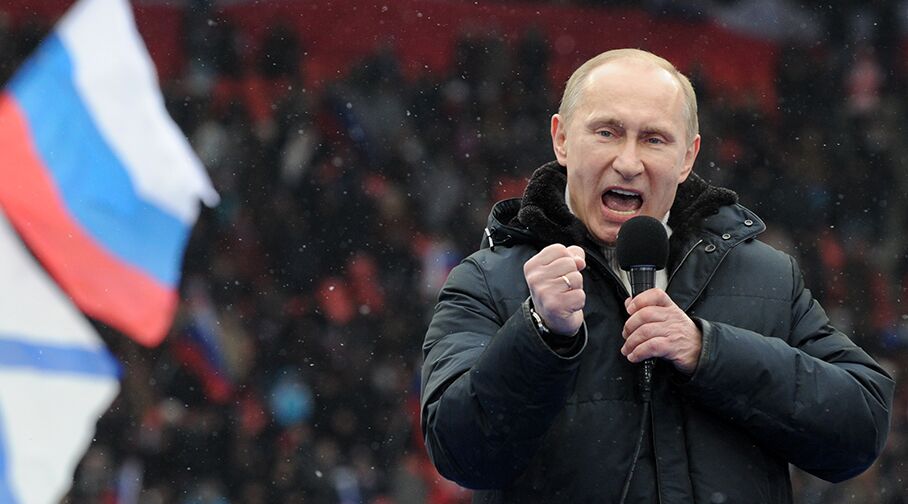 Those who underestimate Russia’s Vladimir Putin do so at their peril.

In the West, many see Russian President Vladimir Putin more as a schoolyard bully than a ruthless tyrant. He’s mischievous and unfriendly, but his behavior, we tell ourselves, is the result of insecurity. If we ignore him, he’ll grow out of it. Many are amused by and even admire Putin’s personality and behavior. He is the John Wayne of world politics: decisive, uncompromising and masculine. He is the antithesis of the soft, politically correct Western politician. He’s traditional, conservative and pragmatic in a world growing ever more liberal, secular and dangerously idealistic.

But we must not be deceived by Vladimir Putin.

There is ample evidence of what this man is about and what he is capable of—more than enough to undermine the naive perspective so many have of him. Many of those who ignore this reality are going to suffer for doing so.

Evil often has a way of seeming attractive and enticing, right before it destroys you.

In 1999, a bout of terrorist attacks occurred in Moscow and other Russian cities. Explosives were planted in cars, apartment complexes and shopping centers. Hundreds of people were killed and many more injured. The country was gripped by fear and anxiety.

It was widely believed the attacks were perpetrated by Chechen rebels. Chechnya is a little sliver of territory in the Caucasus, near the Caspian Sea. After the dissolution of the Soviet Empire, Chechen separatists declared independence. Tension and war have persisted ever since.

Boris Yeltsin, aging and in poor health, was Russia’s president that summer and autumn when explosions were terrorizing Russia. In August, Vladimir Putin transitioned from head of the fsb (Russia’s Foreign Security Service, successor to the kgb) and became Russia’s prime minister, serving under Yeltsin. At the time, Putin was positioning himself to run for president in the 2000 elections.

For a political candidate seeking to make his mark, the devastating explosions rocking Russia were a terrific opportunity. The country was in crisis, and Putin presented himself as tough, decisive, capable. The rest is history: Today he is considered the single most powerful man on Earth.

But to this day, many believe—and evidence indicates—that this opportunity was actually created by the presidential candidate and former kgb agent.

In The Man Without a Face—The Unlikely Rise of Vladimir Putin, Russian journalist Masha Gessen documents multiple examples of Putin’s ruthless and calloused personality. In one lengthy section, Gessen probes the foiled bombing of an apartment building on Sept. 22, 1999, in the Russian city of Ryazan.

The attack was thwarted when a local bus driver, returning to his apartment that evening, witnessed two individuals unloading heavy sacks from a car and planting them in the stairwell in the cellar of the apartment building. The man was suspicious and called the police. The police peered into the sacks, which were labeled “sugar,” and saw wires and a clock. They called the bomb squad and quickly evacuated the building. Hundreds of residents, some of whom were disabled, spent hours that night standing in the cold.

The next morning, the whole country was talking about the foiled attack. The interior minister called a press conference on September 24 to reveal that an explosion had been prevented.

But then something odd happened. Half an hour after the interior minister delivered his press conference, the head of the fsb (a close ally of Putin’s) explained in a press conference that the foiled attack was actually an fsb training exercise. Apparently the individuals who planted the sacks were fsb officers, and there were no explosives inside.

Although many believed the story, the math didn’t add up. Local police had actually seen the bombs in the sacks. Following the discovery, more than 1,200 police officers had been dispatched to track down the terrorists. Why do that if it was a training exercise? The local chapter of the fsb had no knowledge of the training exercise. Why was Russia’s interior minister allowed to make a fool of himself on tv discussing the foiled attack? Eyewitness accounts suggested the car from which the sacks were unloaded belonged to Russian officials. None of the citizens evacuated from their apartments believed it was a training exercise.

Gessen powerfully and logically demolishes the “training exercise” story in her book. But why would the fsb fabricate such a story? Because local authorities investigating the foiled attack were following a fact trail that led directly to the fsb!

It is also important to note that the bomb squad identified the explosive in the sacks as hexogen, a powerful material commonly used in bombs since World War ii. As Gessen notes, the same explosive had been used in some of the other bombings in Moscow and elsewhere in the weeks prior to the Ryazan bombing. This raised an obvious question: Was Russia’s own fsb responsible for some of the other terrorist attacks that actually killed and injured hundreds of Russians? Many believe this is the case.

In 15 years, Putin has retained not only his power, but also his strategy for victory. Putin manufactures or exaggerates threats, then exploits the fear by presenting himself as the solution.

Gessen explains how initially she couldn’t believe the Kremlin would do such a thing to its own people, but after seeing the evidence, she says, “I could now believe the fsb had most likely been behind the deadly bombings that shook Russia and helped make Putin its leader. … The deadly chain of explosives halted at the same time.”

What an amazing coincidence: After the foiled Ryazan attack, the bombings apparently stopped.

Gessen also recounts the investigations of Boris Berezovsky, a rich, influential businessman who helped Putin become president. Berezovsky fell out with Putin soon after Putin took office. Life as an opponent of Putin was dangerous; so, with the Russian government pursuing criminal charges against him, Berezovsky sought political asylum in the United Kingdom. From London, Berezovsky stepped up his effort to expose and oppose Russia’s president.

Berezovsky initiated his own investigation into the Ryazan bombing. “I can tell you with absolute sincerity that at the time I was sure it was the Chechens,” he told Gessen almost 10 years after the attack. “It was when I came here [London] and started looking back that I eventually came to the conclusion that the explosions were organized by the fsb. And this conclusion was based not only on logic—not even so much on logic as on facts. But at the time I did not see those facts ….” He said that the fsb intended to use the explosions “to unite Russians in fear and in a desperate desire for a new, decisive, even aggressive leader who would spare no enemy.”

On March 23, 2013, Berezovsky was found hanged in his home near Ascot. No one knows if Berezovsky killed himself or if one of the multiple attempts on his life was finally successful.

The spate of bombings in 1999 was instrumental to Putin’s emergence as Russia’s president. During his first appearance on Russian television, on the day after the Ryazan incident, Putin told his people: “We will hunt them down. Wherever we find them, we will destroy them. Even if we find them in the toilet, we will rub them out in the outhouse.”

This was Putin’s first time on television and his message, both in delivery and content, was robust, adamant and, to a nation in crisis, incredibly appealing. “This was the language of a leader who was planning to rule with his fist,” Gessen wrote. “These sorts of vulgar statements, often spiced with below-the-belt humor, would become Putin’s signature oratorical device. His popularity began to soar” (emphasis added).

On December 31, with his health ailing and facing enormous pressure from many Russian officials, Boris Yeltsin unexpectedly resigned. Vladimir Putin, the former kgb agent and by this time one of Russia’s most recognized and popular politicians—and the apparent solution to Russia’s war against Chechen terrorists—became acting president. By the time national elections were held three months later, Putin, having had access to the Kremlin’s many levers of influence, had guaranteed himself victory. He was inaugurated as president on May 7, 2000.

In 15 years, Putin has retained not only his power, but also his strategy for victory. Today, much like he did in 1999, Putin manufactures or exaggerates threats to arouse alarm and create anxiety. He then seeks to exploit the fear and anger of his people by presenting himself (and his policies) as the solution. He has done this in Crimea, Ukraine and now Syria.

This is how Vladimir Putin operates. Western leaders need to recognize this reality.

Putin is a cruel, calloused tyrant with an intense determination to emasculate the West—especially America—to expand Russian power, and to establish Russia as the world’s leading nation. He has taken Crimea and decimated Ukraine. He is building alliances with the East that are designed to undermine the West. Now he is forging himself as the supreme authority in the Middle East and the linchpin in Mideast politics.

This man wants to be the supreme world authority!

Leaders of the United States and Britain appear willfully blind to the nature of Vladimir Putin. He is not the schoolyard bully with a penchant for creating mischief and occasionally stepping over the line. He is much more than a macho-man caricature who sells himself as a bastion of conservative, traditional values. This man is a killer. He needs to be feared and respected. He is changing the course of history.