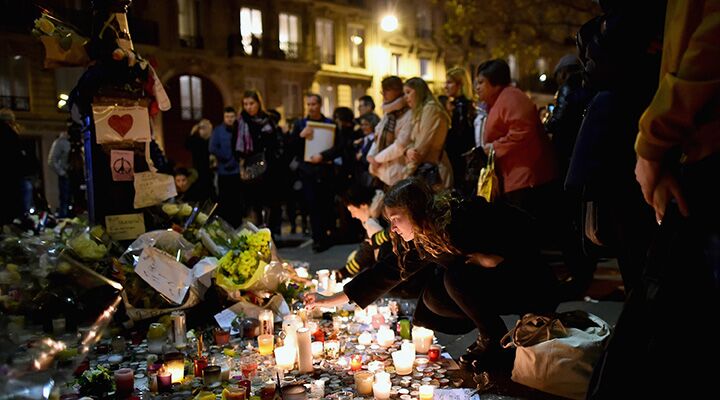 Last week’s attack shook the world. Europe’s response will shake it much harder.

Last week’s attack on Paris was the worst violence that city has seen since World War ii. To many, Paris is the epitome of civilization, yet Friday’s coordinated attacks were some of the most barbaric in the history of the world. Now that the reality of what has just happened is sinking in, the big question on the minds of people around the world is, how will Europe respond?

The short answer is, much more strongly than in the past.

French President François Hollande called the Paris attack an act of war. “Faced with war, the country must take appropriate decisions,” he said. France “will be merciless toward the barbarians of Islamic State group” and “will act by all means anywhere, inside or outside the country,” said Hollande.

Compare this with Spain’s non-response to the terrorist attack on Madrid in 2004. After that, Spain capitulated to the jihadists! This time around, France appears to be dead set on seeking revenge.

Germany too may be gearing up for action. “Do we now have to go to war?” asked Germany’s most popular newspaper Bild. It speculated that France could invoke nato’s mutual defense clause and quoted several German politicians stating Germany’s preparedness to use military force.

The Paris massacre has awakened a sleeping giant. Many Europeans have already made a direct connection between this attack and Europe’s ongoing refugee crisis. One of the attackers had a Syrian passport and may have entered Europe through Greece as a refugee. Germany arrested another man a couple of weeks ago who was heading to France with a car full of firearms and hand grenades.

This is exactly what Europe’s anti-immigration politicians have been warning about for months. In September, United Kingdom Independence Party leader Nigel Farage said “my concern is that isis have said that they will use the migrant wave to flood Europe with half a million of their jihadist fighters. … Even if it’s only 500, I am very worried about that.”

After the attack last Friday, everyone now sees that Farage and others had good reason to worry. The question is, how will Europe respond?

Leaders like François Hollande have talked tough in the past, but with little action to back it up. This time, it may well be different. Far right parties in Europe were already on the rise, even before Friday’s tragedy. A French poll published last week put the far right National Front leader Marine Le Pen in first or second place for France’s presidential elections. The pressure is on for leaders in Europe to act—and now!

Prof. Peter Neumann, a terrorist expert at King’s College London told Britain’s Channel 4 that if “someone related to the influx of refugees” was involved in the attacks, it “could almost lead to uncontrollable riots and attacks in European cities.”

“Far-right groups were quick to seize on the Paris terror attack as evidence of a need to curb immigration,” wrote the Associated Press. But “while it’s the extremists on the far right who are grabbing most of the headlines, mainstream Germans are increasingly being drawn into inflammatory rhetoric—and at times anti-foreigner sentiment” (emphasis added throughout).

The article details the “wave of fury” sweeping across Germany—prompting a “steep rise in attacks on refugee shelters”—and this was before November 13! Even more worrying, “security officials warn that there appears to be a general willingness emerging in Germany to use violence for political reasons.”

Jochen Hollmann, the head of the department of the protection of the constitution in the German state of Saxony-Anhalt, warned that it used to be easy to tell the difference between neo-Nazi groups and mainstream politics. “These boundaries are increasingly dissolving though,” he told the Mitteldeutsche Zeitung.

In an article titled “What’s Happening to My Country?”, Markus Feldenkirchen wrote that the “mood in the country is akin to a drunken rage of the kind last seen in the beer halls of the 1920s Weimar Republic—that period of crude, uncivilized behavior that paved the way for Hitler’s rise and the most brutal decade in world history.” Here again, this was in an article that appeared on Der Spiegel’s English-language website the day before the Paris attacks.

“The Federal Republic of Germany established a functioning democracy in the decades after Hitler, and its people had good reasons to be proud of the country’s political culture,” Feldenkirchen warned. “But no one should take it as a certainty that this achievement is safe forever.”

It’s no wonder that Germany’s politicians are pushing for change after the Paris attacks.

The migrant crisis has already been the biggest challenge for German Chancellor Angela Merkel. Bavarian Premier Horst Seehofer has been a key leader in the right wing opposition to her open door for migrants. Speculation about Merkel’s resignation increases by the day.

In the latest issue of the Trumpet print edition, columnist Brad Macdonald said, “Europe is experiencing a transformative identity crisis.” He wrote:

In the immediate aftermath of World War ii, the most destructive conflict in history, the primary goal of Europe’s postwar architects was to create a system that would guarantee peace and stability. This meant suppressing past demons and founding a system on more advanced values. Postwar Europe was built to value collaboration and cooperation. It was designed to be enlightened, multicultural and tolerant. …Perhaps the greatest effect of the refugee crisis, together with Russia’s dramatic resurgence and Europe’s rolling financial problems, is the way it is causing Europe to shed this postwar veneer and return to its past. Being tolerant feels good, until hundreds of thousands of foreigners enter your nation and expect you to foot the bill. Being multicultural is wonderful, until Muslims waving Islamic State flags and eyeing your teenage daughter settle in your village.

Compare that with what Peter Foster wrote for the Telegraph in the aftermath of the Paris attacks: “The Paris attacks … threaten the ‘very essence’ of the European way of life, as far-right parties seek to capitalize on the attacks, analysts have warned.”

He continued, “With Paris now enduring this second major terror bloodbath in under a year, questions are now being asked about how much longer both Europe’s open-border system and vision of a tolerant, multicultural society can survive.”

Yes, indeed—how much longer? Europe is awash with immigrants. Some of them—how many, no one knows for sure—are radical Islamists. And as Foster notes, because of the Soviet Union’s collapse and the Balkans wars of the 1990s, there are loads of explosives and firearms on the Continent. Little Belgium, for example, has an estimated 900,000 firearms in circulation—approximately one gun for every 12 people.

If people would just look at history, they would see where this is leading. Notice what Stratfor’s George Friedman wrote after the Charlie Hebdo attacks in Paris earlier this year:

Enough Muslims share that fervency to endanger the lives of those they despise, and this tendency toward violence cannot be tolerated by either their Western targets or by Muslims who refuse to subscribe to a jihadist ideology. And there is no way to distinguish those who might kill from those who won’t. The Muslim community might be able to make this distinction, but a 25-year-old European or American policeman cannot. And the Muslims either can’t or won’t police themselves. Therefore, we are left in a state of war. French Prime Minister Manuel Valls has called this a war on radical Islam. If only they wore uniforms or bore distinctive birthmarks, then fighting only the radical Islamists would not be a problem. But Valls’ distinctions notwithstanding, the world can either accept periodic attacks, or see the entire Muslim community as a potential threat until proven otherwise. These are terrible choices, but history is filled with them. …It is difficult to imagine another outcome save for another round of ghettoization and deportation. This is repulsive to the European sensibility now, but certainly not alien to European history. Unable to distinguish radical Muslims from other Muslims, Europe will increasingly and unintentionally move in this direction. …We are entering a place that has no solutions.

Of course, the Bible reveals that there is a solution. But it won’t be implemented until after one more crusade-like clash between Europe and radical Islam!

God says there will be a clash in this end time between the kings of the north and south. These are the same two forces that were pitted against each other during the Crusades—Catholic Europe and radical Islam! The Bible says Islamic forces will aggressively “push” at Europe. The European Union will retaliate forcefully against the Islamic push.

The Trumpet has been warning of this clash for years. The Paris attack takes us one giant step closer to that prophesied confrontation. The pushy nature of radical Islam has been clear for years. Europe’s aggressive response is about to come into view.

It’s all leading to the most destructive war in human history!

For more on the clash of these two powers, read Gerald Flurry’s article “The Coming War Between Catholicism and Islam.”