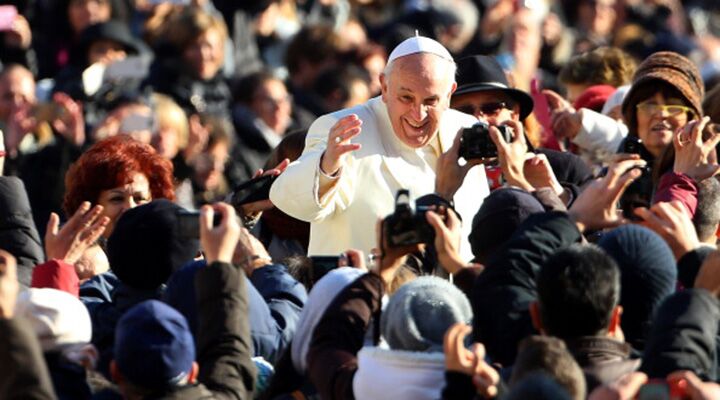 Pope Francis visited the United States for the first time in September. You may have noticed.

Everywhere he went, he attracted worshipful throngs. If you watched on television, you saw many of them stretching and straining to touch any part of his body, to grab hold of his garment. Parents pleaded for the pontiff to kiss their sick and disabled children. On Capitol Hill, House Speaker John Boehner was so overcome with emotion during the pope’s address, he was seen repeatedly wiping away tears.

After that speech, one congressman rushed to the podium and grabbed the pope’s unfinished glass of water. He wanted to drink—and have his wife and children drink—from the same cup. Perhaps he drew inspiration from the account in Matthew 20, where Jesus asked if His disciples were willing to drink from the same cup from which He would drink.

Devout Catholics see Pope Francis as the Vicar of Christ. The definition of vicar does not mean a mere representative of Christ—it means the pope is in place of Christ. When you see people weeping over this man, thronging into the streets to see him, reaching out to touch him, adoring him, hanging on his every word, and rushing the stage to touch their lips to the same cup, it sure does seem like they are treating this man as if he were Jesus Christ.

How unusual was the way the pope was treated during his five-day tour. His every movement was broadcast in real-time on multiple, if not all, major networks.

And judging by the wall-to-wall, 24-hour, five-day coverage of the pope’s visit—served up by an openly adoring press—you could be forgiven for assuming they drank from the same cup of pope worship.

After all, how does the major media normally treat religious people?

Let’s say you’re a county clerk (a lifelong Democrat, actually) who refuses to sign a marriage license for homosexuals because of your religious beliefs. Journalists will automatically attack, agreeing that you should immediately be jailed and that Americans in general should learn of your personal failings and sins. Let’s say you are a bakery owner who declines to cater a ceremony for two grooms. Journalists will ambush you and shade their coverage to favor those howling for the courts to shut you down. Let’s say you are a conservative politician drawing inspiration from God and the Bible. They will ridicule you as primitive and unfit for office.

If you’re a private person who opposes a movement openly based on aberrant sexual desires, the press, social media and even businesses will hush, ridicule or smear you. If you’re Muslim, you may get a pass. But if you’re a Christian, you better be ready for some persecution.

Except if you are Pope Francis. Then they adore you.

How unusual was the way the pope was treated during his five-day tour. His every movement was broadcast in real-time on multiple, if not all, major networks. You could sit for half an hour watching cnn broadcasting a few cars on a roped-off Philadelphia street in the dark and hear commentators go back and forth with frequent speculation on whether the pope had or had not in fact left his car to go into the building and go to bed.

The press went to huge lengths to capture these minute details. During his five-day American tour, everything he did was so meaningful, so profound—he was so sincere, had so much love for people, and such spiritual depth.

Such adoration is unusual in public discourse in America. The papacy has had a corrupt and bloody influence on European history, and America’s English ancestors largely broke free of papal control. America was founded free of Vatican interference, but with full toleration and acceptance of Catholics, a religious minority. America developed greatly free of the papacy, and it thrived, unhindered by much of the obeisance, intrigue, persecution, corruption and even war that the ancient church sparked among our country’s European ancestors. To have popes visit the United States has not been unheard of, but American history is notable and unique for its independence from Vatican influence.

Add to this the simple fact that the pope is, obviously, religious. Like other churches, his organization holds that there is a God, that there is good and evil, that human beings are sinful, that a God came to this planet as a human being to die for those sins, and that among those sins are the practices of homosexuality and abortion. State those same beliefs to the presidents of abc, cbs, nbc, cnn and msnbc to their face, and they will laugh you out of the room—or throw you out. Do it while wearing a cassock, and they won’t even let you in.

The networks would never give you or even the country’s most prominent Christian leaders the airtime they gave to the pope, even though there are twice as many American Protestants as there are Catholics. They won’t give that kind of coverage to rock stars or athletes, or even other heads of state.

So why did they so passionately embrace this religious leader?

In part, it is because over the last 30 months, he has outspokenly supported a number of issues on President Obama’s left-wing agenda.

Last year, Pope Francis helped President Obama reestablish full diplomatic relations with the Castro regime in Cuba. He offered strong support for the administration’s nuclear deal with Iran in May. He recognized the Palestinian “state” in June, a policy President Obama favors.

Francis has become known for his radical economic ideas. Soon after becoming pope, he began a campaign against excess and compulsive consumption, the sins of “savage capitalism.” He’s on a crusade for the poor, and his main target is America’s free market economy—specifically the idea that the person who should decide whether you should buy or sell is you. Francis wants heavier government involvement in those transactions, and a redistribution of wealth from those who have it to those who don’t. Much like President Obama.

So why did they so passionately embrace this religious leader? … [H]e has outspokenly supported a number of issues on President Obama’s left-wing agenda.

Francis is also aggressive in his stance toward the environment. “Climate change is a problem we can no longer leave to our future generation,” the pope said at the White House during his U.S. visit. His position goes far beyond advocating ways to reduce pollution. He wants much more drastic changes, and he wants America to take dramatic steps that are risky to the U.S. economy and national security. No wonder the Obamas wanted to give him a personal greeting on the tarmac at Joint Base Andrews upon his arrival in America.

When it comes to immigration, the president once again finds staunch support coming from behind the five-story walls of Vatican City. Pope Francis has called on America to keep its borders open—to welcome the migrants and refugees seeking a better life. When introducing Pope Francis at the White House on September 23, President Obama said, “You remind us that the Lord’s most powerful message is mercy. That means welcoming the stranger with empathy and a truly open heart. From the refugee who flees war-torn lands, to the immigrant who leaves home in search of a better life.”

The liberal press see a kindred spirit between these two. That is a core reason why the coverage surrounding the pope’s visit was so positive. Through it all, the press ignored the fact that this same pope refused to visit with political dissidents in Cuba, people who would really like to live under something besides a dictatorship. The news anchors said nothing about this pope propping up a tyrannical Castro regime. They ignored the fact that the economic policies this pope is advocating are the same ones that bankrupted his home country of Argentina—a nation that used to be one of the leading economies in the world!

Never mind any of that! On the more important global issues of our day, Pope Francis might help to advance President Obama’s liberal left-wing agenda. Francis, Obama and most of the media share the same agenda. That is why you saw all the flashbulbs, the minute details and the fawning interviews. Much as you did with the Obama campaign.