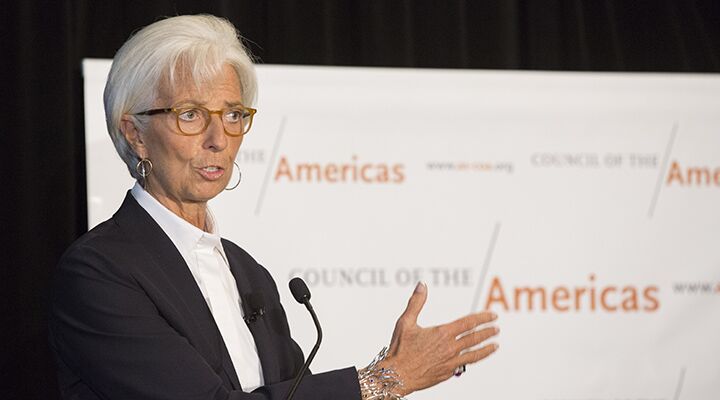 With interest rates at a 5,000-year low, are we really surprised that a crash is coming?

The International Monetary Fund (imf) is warning that a financial crisis is practically guaranteed, and it’s just a matter of time before it strikes. The organization’s newly released Global Financial Stability report is sobering reading. The flaws in the global financial system have not been fixed, it says.

It highlights soaring global debt, particularly in emerging markets. The implication is that we could see a repeat of the 1997 currency crisis also known as the “Asian Flu,” which saw massive currency devaluations, contractions in global trade, economic turmoil, and social instability.

But conditions are much more dangerous today than back then. Virtually the whole world is teetering on recession, the West and Russia are back in Cold War mode, the Middle East is engaged in actual war in Syria, and the world is more interconnected than ever—potentially making the transmission of financial diseases much quicker.

And much of the riskiest aspects of the massive debt buildup is taking place in the domestic and overseas shadow-banking sector—and outside the purview of financial authorities.

Startlingly, the imf says the looming economic crisis is a direct result of how authorities tried to solve the last one. The decision to slash interest rates to such unprecedentedly low levels has encouraged the massive debt buildup—a problem for which there is no painless solution.

Global interest rates are at 5,000-year lows, says Agora Financial’s Bill Bonner. Since the building of the Egyptian pyramids—that is to say, forever—interest rates have never been this low, he reports.

“But woe to the price-fixer who fixes the price of money too low … for too long … and then attempts to raise it,” writes Bonner.

“That is the jam in which [Federal Reserve Chief] Janet Yellen finds herself. She is damned if she does—for she will wipe out trillions of dollars from the value of stocks and bonds. She is also damned if she doesn’t—for she will only make the situation worse by driving more money into more unsustainable asset price booms.”

The imf report comes as former Federal Reserve chief Ben Bernanke is on tour promoting his new book about the 2008 economic crash. And how he saved the global financial system.

The Great Recession panic in 2008 was worse than even the crash of 1929 that set off the Great Depression, Bernanke told cbs.

But according to the imf, the very actions Ben Bernanke is patting himself on the back for virtually guarantee another financial crisis.

It is only a matter of time. And the longer it takes before it strikes, as Bonner notes, the worse it will be.

(Listen to Joel Hilliker interview Robert Morley about the implications of the latest imf report. Begins at 31:53.)

Ironically, while the imf warns about the dangers of growing debt levels caused by central bank policies, the Federal Reserve has decided to discontinue publishing the single-most widely followed report on debt levels in America.

Back in March, the Federal Reserve’s Total Credit Market Instruments report showed that total debt in America had soared to $59 trillion.

Then suddenly the series stopped. No explanation was offered. The Fed just stopped publishing the data.

Financial analysts wondered why the Fed would stop publishing the data. After all, it contained the most comprehensive summary of household, financial, corporate and government debt available, all the way back to the 1950s. It reminded people of how the Federal Reserve stopped publishing the M3 money supply figure just as inflation really started to take off.

Was the data becoming too embarrassing?

It showed that debt levels and America’s economy grew at approximately the same steady rate for many years. But then around the time America abandoned the gold standard in 1971, debt began outstripping the economy.

Then more recently, in the lead-up to the 2008 economic crash, it shows total debt levels going parabolic—shooting vertical.

As it turned out, the soaring debt was a warning something was wrong in the economy.

After the crash, debt levels flattenned out and fell … a bit. But what happened next?

Starting in 2010, as the Fed data showed, debt levels started to rise again. Once more they are shooting parabolic and reaching new heights. What comes next?

On Friday, the Federal Reserve finally came out and explained its actions.

The Fed said two things. First, it would no longer be producing the Total Debt charts and tables. Instead it would provide the data in other ways, leaving it to others to add up the totals themselves.

But it was the second thing the Fed quietly reported that was perhaps more disturbing. It said it had discovered that it had been underreporting how much debt was in America.

It discovered that its methodology excluded debt that America owed to itself. It wasn’t reporting money the government had borrowed from its pension plans. So total debt in America is actually $2.7 trillion higher than it was reporting! Total debt is $61.7 trillion, not $59.

Think about that. The premier financial authority in America was producing “total debt” tables that were short $2.7 trillion. That is not just embarrassing—that is credibility destroying.

And credibility is one of the most important things when it comes to maintaining confidence in a financial system balancing on the edge of the abyss.

“[E]ven with the U.S. economy and the world economy in such a precarious state, hardly anyone seems concerned!” wrote Gerald Flurry earlier this year. “Americans know far more about the Super Bowl than about this super crisis threatening to destroy our financial system.”

For an indication of where the looming economic crash may originate, read Gerald Flurry’s article “A Bold Warning: America’s Economic Collapse.”