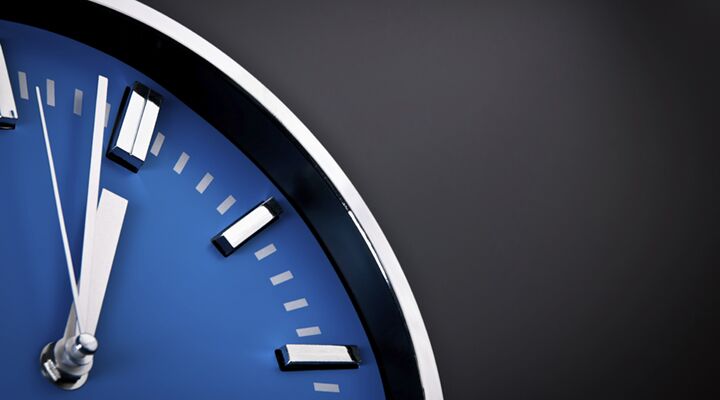 Time is running out on the global economy.

The global economy is out of control, and as the book Debt and Delusion warned in 1999, we are living on borrowed time. Only “one minute” remains of that time, according to the Telegraph’s doomsday clock for global market crash.

Profligate private-sector loans were moved on to the public-sector balance sheet and vast money printing gave the global economy room to heal.Time is now rapidly running out. From China to Brazil, the central banks have lost control and at the same time the global economy is grinding to a halt. It is only a matter of time before stock markets collapse under the weight of their lofty expectations and record valuations.

Is this outcome surprising? Central banks attempted to solve the worst financial crisis of that time primarily through “vast money-printing.” They had nothing of value to back it up!

Ficenec then highlighted eight dangerous trends that reveal how precarious the global economy is:

The Telegraph noted that China’s unprecedented stimulus packages made it “the great savior of the world economy in 2008.” But, “the Chinese economy has now hit a brick wall. Economic growth has dipped below seven percent for the first time in a quarter of a century, according to official data. That probably means the real economy is far weaker.”

This was our top story on our August 14 Trumpet Hour podcast. The Spectator noted that this development is the biggest economic story of the year—far more than the Greek crisis. The sheer size of the Chinese economy packs it with a greater global impact.

The China slowdown negatively affected the world’s commodity markets. Ficenec’s article noted that it resulted in the Bloomberg Global Commodity index of 22 commodity prices falling to levels last seen at the beginning of this century.

Oil is selling at multi-year lows at about $50 per barrel. Iron ore, the raw material needed to feed China’s steel mills, has fallen to $56 per ton—less than half what it was in January 2014.

Global capital markets raised billions of dollars in loans to fund oil and mine exploration. Now that oil and metal prices are collapsing, these projects are losing money.

The Telegraph wrote: “The great props to the world economy are now beginning to fall. China is going into reverse. And the emerging markets that consumed so many of our products are crippled by currency devaluation.”

Some of those struggling markets are brics (Brazil, Russia, India, China and South Africa), stock markets in Greece, and the safe-haven currency of the Swiss franc.

Credit markets are desperately trying to reprice risk because central banks can’t bail them out as easily anymore.

The United States has kept interest rates at near-zero percent figures for about six years in an effort to keep the global economy afloat. But that kind of “solution” is unsustainable. The Federal Reserve is expected to raise interest rates at the end of this year. Markets are already feeling the shocks from impending interest rate hikes.

Bull markets—when stocks are rising—never last forever. In fact, they often lead to crises. The Telegraph explained: “The UK stock market is in its 77th month of a bull market, which began in March 2009. On only two other occasions in history has the market risen for longer. One is in the lead-up to the Great Crash in 1929 and the other before the bursting of the dotcom bubble in the early 2000s.”

The U.S. market is overvalued, and it’s only a matter of time before the bubble bursts. The U.S. fiscal gap—the real debt the United States owes—currently stands at $210 trillion. I discussed this in some detail last Friday in my Trumpet Daily Radio Show.

How will the world get out of this economic predicament? By vast “money printing”? Extending borrowing limits? What will the solution be this time?

The global economy is quickly running out of time. Don’t be fooled by those who say things will go on as they always have.

Jeremiah 17:5 says, “Cursed be the man that trusteth in man ….” In other words, there is no hope in man’s financial solutions. Four verses later, the Bible tells us why: “The heart [meaning the mind of man] is deceitful above all things, and desperately wicked [meaning incurably sick] …” (verse 9). Individuals and nations deal selfishly and deceitfully with each other.

But there is hope! The late Trumpet writer Tim Thompson wrote extensively about the global financial crisis, and the hope that every individual can have—now and in the future. You can follow sound financial principles and be protected from financial trouble now! Start by reading this short but powerful booklet.