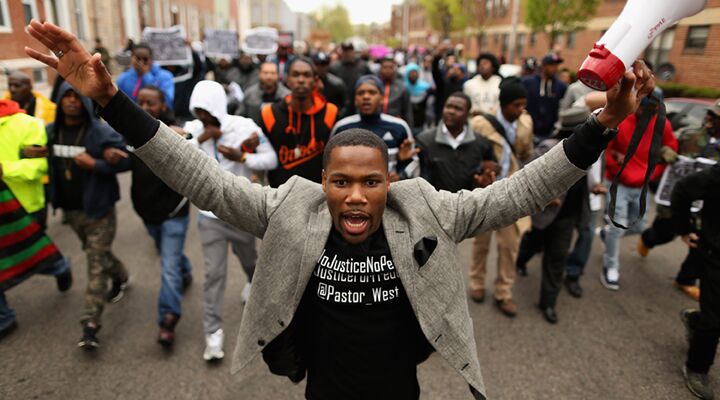 Why are St. Paul schools looking like the streets of Baltimore? There is a connection.

Some schools in St. Paul, Minnesota, have recently become madhouses. Students attack teachers. Students attack each other. Teachers are threatened. One teacher has a secret signal for her “good” students to use, for fear of letting in these out-of-control monsters.

And sadly, this chaos is self-induced—and totally avoidable.

What happened in St. Paul? The Federal Justice Department says the schools in Minneapolis and St. Paul are racist. This is because black students are disciplined and suspended at higher rates than Caucasians and Asians. The Justice Department has accused the 2,300 majority white teachers in Minneapolis of systemic racism and has threatened prosecution unless the rates of suspension equal the proportion of students in the schools.

Because these school districts don’t have the money to fight the federally funded Justice Department, they are submitting and doing what the Justice Department says. In St. Paul’s case, that means adopting the educational and discipline standards of an organization called Pacific Educational Group (peg). It is based out of San Francisco, California, which probably gives you a good idea what this group is all about.

peg’s main purpose seems to be to sell the concept of victimization. It claims that the American education system—which traditionally has been run by whites (although that is not the case today)—is racist toward black students.

After Pacific Educational Group took over, it started radically changing the ways schools are run.
To solve this supposed “racism” and help black students achieve, peg believes that school curricula should be customized to meet the cultural specifications of black students. This basically means lowering academic standards. peg also rejects the concept of using suspensions or expulsions to discipline black students.

After Pacific Educational Group took over, it started radically changing the ways schools are run. Special-needs students (violent students and ones with other behavioral issues) were put back into regular classrooms. Student suspensions were replaced by “time outs.” School officials started forgiving or ignoring violence and other unacceptable behavior.

So you can imagine the result.

Without law, without discipline, without consequences, St. Paul classrooms descended into pandemonium. A big basketball player head-locked a female teacher and hip-tossed her to the ground. He was given a two-day vacation. She, potentially a spinal injury.

And, oh—taxpayers forked out $3 million to peg to turn their classrooms into World Wrestling Federation arenas.

Advocates say that if students get suspended, they will turn to crime and end up in jail. But does doing away with suspensions and dumbing down curriculum change that? It seems pretty ridiculous to believe that by stopping penalties, students will become less likely to commit infractions.

On the contrary, keeping destructive students in school is similar to purposely putting rotten apples back in the box. The students who want an education lose their opportunity—and often get bullied and beat up—while the borderline students, who quickly realize there are no penalties for their actions, join the troublemakers.

On the contrary, keeping destructive students in school is like purposely putting rotten apples back in the box.
Back in November, former Minneapolis Superintendent Bernadeia Johnson announced that black students would no longer be suspended or expelled for the same violations as whites and Asians. Because black students in Minneapolis schools are 10 times more likely than white and Asian students to be suspended, any proposed suspension would be personally reviewed by Johnson and she would decide if the student really should be expelled—which meant that unless that student practically killed someone, they would stay in the classroom.

As I asked at the time in “Minneapolis Principals Not Allowed to Suspend Black Students, Only White Ones”:

Where there is no law, chaos reigns. There is no freedom. What we are seeing in the schools of Minneapolis and St. Paul is the same thing we saw in Ferguson and Baltimore. Everyone is a victim—and it’s enforcing the law that is the problem.

Turning a blind eye to crime doesn’t make it go away. As Trumpet editor in chief Gerald Flurry wrote in No Freedom Without Law, “God’s law brings us the ultimate, most wonderful freedom of all. It protects our families. It protects our children. It protects us from all the evil in this world.” Read the booklet to find out more about the beauty of law and how it can solve the social problems we are facing today.