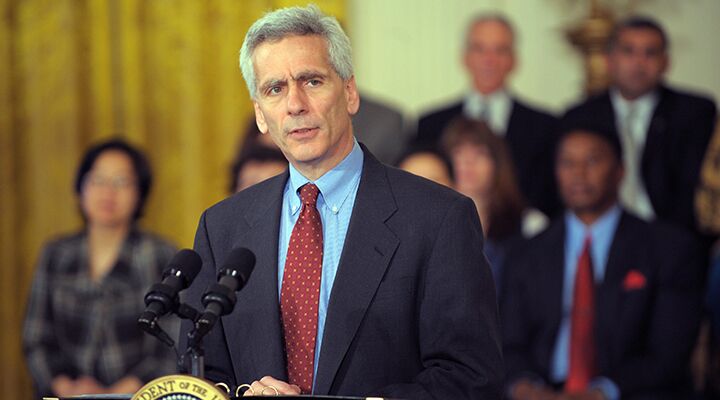 Can you guess what his solution is?

The United States’ trade deficit soared 43.1 percent in March to the highest level since the 2008 Great Recession. The percent rise was the most in 19 years.

Why? The dollar is soaring in value.

At least that is the common narrative.

Americans spent a whopping $51.4 billion more importing foreign goods than they earned selling products to others. Part of the surge was due to the settled labor dispute at West Coast ports, which released pent-up demand. But even after accounting for that anomaly, for the past three months imports have exceeded exports by 5.6 percent.

The trade deficit is growing rapidly.

Americans spent a whopping $51.4 billion more importing foreign goods than they earned selling products to others.
This is worrying for two reasons. First: It subtracts from economic growth. In fact, America’s economy is growing so slowly, this unexpected jump in the trade deficit may have pushed it into technical recession.

Second and more startling: The massive trade deficit comes against the backdrop of low oil prices. Low oil prices should reduce the trade deficit because America is spending less to import oil. But that’s not happening. In other words, America’s trade deficit is worse than the headline numbers seem to indicate.

The one headwind, by the way, is that the strong dollar really does make it tougher for our manufacturers to export. … It raises the cost of our goods in export markets and lowers the cost of other competitors’ goods in our markets, and so the trade deficit could end up being a bigger drag on growth than it is right now.

Since January, the dollar has soared against virtually every currency in the world. Only gold, the original world reserve currency, has maintained its value. On March 11, the dollar hit a 12-year high against the euro. It is up against the Japanese yen, the United Kingdom’s pound, and the Canadian and Australian dollars. It is up a whopping 18 percent on the usdx, an index that measures the value of the dollar against the world’s major currencies.

In March, Citgroup noted that the dollar was rising at the fastest pace in 40 years. It had gone up for eight months in a row.

The rising dollar is causing havoc.

As Vice President Biden’s former chief economic adviser indicated—job losses are a result. Domestic factories lose to foreigners with depreciating currencies. And jobs go overseas. Once factories shut down in America, the cost to restart is often prohibitive. Regulatory compliance can be a killer. The jobs are gone forever.

In March, Citgroup noted that the dollar was rising at the fastest pace in 40 years. It had gone up for eight months in a row.
In theory, it works like this: A brand new “rhodium silver” Porsche Boxster might have cost €63,000 in June—or about $85,700. But since then the dollar has gone up almost 18 percent against the euro. Now it only takes $70,000 to buy the same Porsche.

So now Americans might start buying more Porsches and Benzes and fewer Corvettes and Cadillacs. Or more Airbuses and fewer U.S.-assembled Boeings. Or more Mexican-made Maytags.

But by that point, the damage is done. Some industries may never come back. Many worker’s skills have atrophied.

So what is the solution? The former Chief Economic Adviser to the Vice President elucidates: “Raising the minimum wage is something that I think helps at the very bottom …. I think that you need to be willing to use fiscal policy to invest in, say, infrastructure; that will actually both help on the macro side in terms of improving the quality of our productive infrastructure, but also help in terms of job creation.”

To summarize: Raise the minimum wage and spend more.

Really? Is that the best our leaders can do?

Raising the minimum wage increases expenses for businesses. That’s a fact. Thus, U.S.-produced goods become more expensive, or companies embrace mechanization to reduce workforces and keep costs down. That too is an observable fact. Minimum wage laws result in the exact opposite of what proponents say they are trying to accomplish. They result in less competitive companies or fewer jobs.

And what about “investing” in infrastructure?

And America is the most indebted nation in the world. So “investing” is really code for “borrowing to invest.”
Yet very serious and smart economists still promote these “investments.” Would you “invest” in something without considering the return?

What is the return on building a new bridge, or a new road? Does anybody know? Didn’t the old bridges and roads do the job? And is replacing a bridge an investment or an expense? How about investing in more schools with bigger gymnasiums and pools? Does that result in better grades, smarter students? Hasn’t the government already tried that? How has building state-of-the-art schools in inner cities worked? Has handing out iPads and laptops to students produced better outcomes?

And America is the most indebted nation in the world. So “investing” is really code for “borrowing to invest.” Don’t investment planners warn people against that? How does borrowing money to invest impact the return of that investment? Won’t future generations have to pay back that debt? Again, no one seems to care.

The Republican answer is to cut spending and lower taxes to grow our way out of our problem. But America’s economy is deeply dependent on debt, and many sectors of the economy are dependent on government spending. Cuts will be extremely painful. With the weak economy, any serious cuts could push the economy into recession. Tax cuts do help long-term growth, but the resulting near-term shortages could be devastating.

Are you starting to see the problem America faces? There are no easy solutions. Proposals are often harebrained and political—divorced from fact. Truth is cast to the ground. No one wants to tell people the truth. It is all about soundbites.

President Barack Obama is set to push through a new trade deal with Asia. It is called the Trans-Pacific Partnership. Will this increase or decrease the trade deficit? Will this increase or decrease prosperity for America? The president’s own party is against it. The unions say it will reduce jobs. Many Republicans say they are for it, yet as Breitbart reported, only two senators out of 54 have read the deal. Remember Sen. Nancy Pelosi’s “we have to pass the bill so that you can find out what is in it”? Now Republicans are saying the same thing.

It is sad that economic solutions have become so political.

If America wants to prosper, it needs to fix its way of life.
The truth is that America’s problems go far deeper than a soaring dollar or a monthly trade deficit.

America faces deep structural problems that hit at the heart of American society. These problems are not primarily economic in nature either, although they have economic consequences.

America’s problems are moral and spiritual. This is what America must understand if it wants real change. And no amount of money, or government mandates will fix these problems unless they address these issues.

If America wants to prosper, it needs to fix its way of life. The economic consequences—joblessness, poverty, crime, poor health—would then largely take care of themselves. And minimum wage laws and government spending projects to reduce poverty wouldn’t even be an issue.

For now, enjoy the soaring dollar and inexpensive imports while they last.