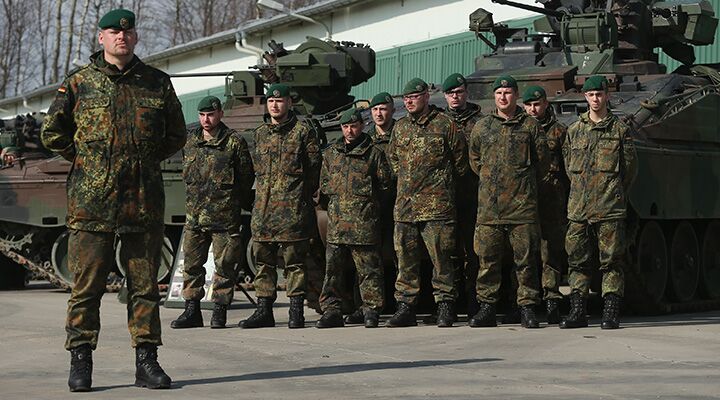 Modern Germany is a new reich, at least in an economic sense, Der Spiegel concluded in the cover article of its March 21 issue.

With a circulation of over 1 million, Der Spiegel is one of Germany’s most popular and well-respected newsmagazines. An English version of the article is available on its website, and is worth reading in full.

“People have even begun talking about the ‘Fourth Reich,’ a reference to the Third Reich of Adolf Hitler,” states the article’s introduction. “That may sound absurd given that today’s Germany is a successful democracy without a trace of national-socialism—and that no one would actually associate Merkel with Nazism. But further reflection on the word ‘reich,’ or empire, may not be entirely out of place. The term refers to a dominion, with a central power exerting control over many different peoples. According to this definition, would it be wrong to speak of a German Reich in the economic realm?”

After a detailed analysis of Germany’s past and present domination of Europe, the article concludes that no, it would not be wrong. “[A]n empire is in play, at least in the economic realm,” the article states. “The eurozone is clearly ruled by Germany, though Berlin is not unchallenged. It does, however, have a significant say in the fates of millions of people from other countries.”

A “reich,” or empire, refers to a dominion, with a central power exerting control over many different peoples.
Spiegel’s article is one of the clearest pieces of evidence that shows the forecasts of Germany’s rise made by the Trumpet, and before it, the Plain Truth, are correct.

Here are some statements from politicians, thinkers and writers across the European Union highlighted by Spiegel:

As Spiegel notes, these type of comments are becoming increasingly common:

A heavy accusation has been leveled at Germany—by some in Greece, in Spain and in France but also by some in Great Britain and in the United States. The euro crisis, a certain breed of politicians, journalists and economists argue, has allowed Germany to dominate southern Europe and to suffocate it in order to impose its principles even as its export policy has meant that the country has profited from that same currency crisis more than any other country.

Spiegel explains how the design of the euro automatically put Germany in this leading position, paving the way for a rich, export-focused Germany. But this new power has turned Germany’s head. “There is a new tone in Germany,” the article states. “It is one that no longer abides by the noble customs of diplomacy. Whispering, suggesting and hinting have been replaced by ranting and blustering.”

“The change in Germany’s approach to European policy has been dramatic,” Spiegel wrote. “[Former German Chancellor] Helmut Kohl sought to avoid isolation at all costs when it came to important negotiations, but Merkel has all but completely rejected that approach. ‘I am rather alone in the EU, but I don’t care. I am right,’ she once said to a small group of advisers during a discussion about the role of the [International Monetary Fund].”

Merkel’s policies have played a key role in forming this German Europe. “Early on in the euro crisis, she developed ideas for so-called benchmarking,” the article continued. “The concept called for European countries to be measured in several categories against the best in that category, which was often Germany. In this way, a German Europe would be created.”

This situation is exactly what Herbert W. Armstrong, editor in chief of the Plain Truth, forecast from the start of the European project. “The United States and the British are striving to bring about a united Europe,” he wrote in November 1954. The outcome of this union: “Germany inevitably would emerge as the leader of a united Europe.”

Two years later he wrote: “The Germans are coming back from the destruction of World War ii in breathtaking manner. Germany is the economic and military heart of Europe. Probably Germany will lead and dominate the coming United States of Europe.”

He even forecast the manner of this dramatic German rise, writing that “this empire would start as an economic movement.”

European nations are getting together on currency reform. We now have Euro-Mart—or the European Common Market, entered into by six European nations! Here are the latest figures, which I have just obtained today:For the year 1958, in general trade, this Europe combine, $45.6 billion, in first place in the world; the U.S. in second place, $30.6 billion; United Kingdom third with only $19 billion, and Russia fourth with a mere $8.5 billion. This is one reason I have repeatedly warned you to watch Germany!

Compare that to Speigel’s description of the rise of Germany:

After the end of the Third Reich, German dominance on the Continent appeared to have been rendered an impossibility for all time. West Germany and East Germany both were initially tentative states that more or less willingly subordinated themselves to their big brothers, the U.S. and the Soviet Union. They ceded to the dominance of others.West Germany, though, soon developed a new—economic this time—instrument of power: the deutschemark. Because the West German economy grew rapidly and its sovereign debt remained relatively manageable, the German central bank, the Bundesbank, dominated economic and financial policy in Europe in the 1970s and ’80s. Governments in France, Britain and Italy paid close attention to the decisions being made in Frankfurt. Shortly before German reunification, a senior official in the office of the French president was quoted as saying: “We may have the nuclear bomb, but the Germans have the deutschemark.”

A Plain Truth article published in 1985, shortly before Mr. Armstrong died, gives a prescient overview of what has transpired over the past 30 years: “Partly because of its geographic location, equally so because of the dynamic nature of its people, Germany, divided or united, remains at the heart of Europe. And Europe’s future will once again, as so often in the past, be decided by Germany’s decisions.” It concludes:

Exactly how the union of Europe will come about is not yet clear. Many events must yet transpire. A new leadership in the Soviet Union as well as declining economic fortunes of the entire East bloc are factors to consider. …In the secular field, German patriotism will not be revitalized until the Federal Republic can be linked with what some call the fossilized German state in the East.Thus, in a roundabout manner, German disillusionment with its American “big brother,” plus its inability to recover a sense of purely national pride and patriotism, could rebound into a greater German zeal for a Europe united politically and religiously. This in turn could lead to the biggest dream of all: a reunited German nation in the heart of Europe, one Germans would feel proud of again.

And Europe’s future will once again, as so often in the past, be decided by Germany’s decisions.
Plain Truth, September 1985
Spiegel’s article also highlights the almost contradictory weakness shown by Germany’s current leadership: “Germany is dominating, people say, but it isn’t leading.” This one sentence encapsulates the essence of the main problems facing modern Europe.

“Germany is once again a paradox. It is strong and weak at the same time—just like in the 19th century after unification, it seems powerful from the outside but feels vulnerable to many Germans,” wrote Hans Kundnani, head of research at the European Council on Foreign Relations. “It does not want to ‘lead’ and resists debt mutualization, but at the same time it seeks to remake Europe in its own image in order to make it more ‘competitive.’”

“Whereas Germany has dominated Europe economically during the euro crisis, it has remained a foreign policy dwarf,” writes Spiegel.

After concluding that Germany has “a significant say in the fates of millions of people from other countries,” Spiegel warns that “[s]uch power creates a significant amount of responsibility, but the government and other policymakers nevertheless sometimes behave as though they were leading a small country.”

Trumpet editor in chief Gerald Flurry devoted a recent television program to this subject. “Germany does not have a strong leader, according to many critics, and they’ve been voicing those views quite often of late,” he said.

Mr. Armstrong and Mr. Flurry both have forecast that the next step in Germany’s history will be the arrival of the strong leadership it currently lacks.

How could these men make predictions that could be proved true, even after so many years? Their forecasts are based upon the truths written in the Bible. To many these sound outlandish, but such a positive track record is certainly worth looking into. To do so, read our free booklet He Was Right.