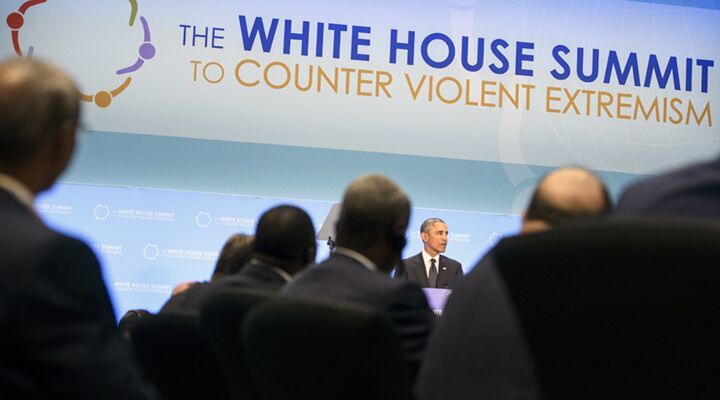 On February 18, President Barack Obama told an audience at a conference on “Countering Violent Extremism” that “Islam has been woven into the fabric of our country since its founding.”

The president continued: “Generations of Muslim immigrants came here and went to work as farmers and merchants and factory workers, helped to lay railroads and build up America.”

Was Islam really woven into the fabric of the United States anywhere near its founding? The first mosque in America wasn’t even built until 1915—after the commencement of World War i, about 140 years after the nation was founded, 308 years after the colony at Jamestown was established.

Sure, there may have been some Muslims who traveled to America during those early years, but to suggest they had a major role in shaping America isn’t true. Even today, only 0.6 percent of the population is Muslim.

In reality, the major contribution of Muslims to America has been profoundly negative.

Immediately after America gained its independence from Britain, the Barbary States, located in North Africa, attacked American shipping. Hundreds of American sailors were captured and sold into slavery by these Muslim nations beginning in 1784. In 1795, the U.S. government paid $1 million—one sixth of its entire budget—to ransom captured crews and ships.

That would be about $630 billion worth of America’s annual budget today.

It was written in their Koran, that all nations which had not acknowledged the prophet were sinners, whom it was the right and duty of the faithful to plunder and enslave; and that every mussulman who was slain in this warfare was sure to go to paradise.He said, also, that the man who was the first to board a vessel had one slave over and above his share, and that when they sprang to the deck of an enemy’s ship, every sailor held a dagger in each hand and a third in his mouth; which usually struck such terror into the foe that they cried out for quarter at once.

To that point in America’s history, extortion is the most significant Muslim contribution toward America.

It wasn’t until 1801 that America finally stopped paying tribute to Tripoli. That was the year America struck back with force—sending its newly constructed navy and a message that targeting Americans would no longer be tolerated.

According to historian David Barton, the only other major contribution Muslims made to early America was selling slaves to American slave traders.

The president’s assertion that Muslims made any majorpositive impact on America during its early history is significant. He has often repeated similar statements, and they obscure the danger posed by Islamists to America. They also perpetuate a common lie, which is that Islam is a religion of peace and that its violent elements are just isolated misguided individuals.

On February 25, the bbc published a new poll on the attitudes of Muslims in Britain. Twenty-seven percent of those surveyed said they had “sympathy for the motives behind the Charlie Hebdo attacks in Paris.” An additional 8 percent said they were “unsure” if they had sympathy or not.

More than a third of British Muslims would not strongly condemn the murder of 11 journalists and four shoppers at the Jewish deli.

These are shocking facts that show just how radical Muslim communities are in one of the world’s most tolerant, liberal and welcoming nations.

What do you think those poll numbers would be in Iran, or Saudi Arabia, or Libya, or Pakistan? Places where the nation’s spiritual leaders, and often their political leaders, speak of jihad and destroying the West?

But many Americans refuse to accept facts, especially when they contradict their worldview. Americans want to believe that people are inherently good and peaceful. But goodness is not the natural state of mankind. What these people don’t understand is that the concept of goodness in the West is based on Judeo-Christian ideals of what is good.

However, the vast majority of people in the world are not Christians, nor Jews. And their idea of what is good is totally different from that of the West. It is not based on the Ten Commandments, and “love your neighbor as yourself” does not extend beyond your family and tribe.

In Islam, for example, “doing good” is waging war against non-believers who refuse to submit to the prophet, and dying a martyr. That is why Muslims strap bombs to themselves, walk onto crowded buses and blow themselves up. That is why Muslims launch rockets into cities, trying to kill civilians. It is why Muslims wage holy war, chop off heads of infidels, take war brides, and proclaim to the world that they won’t stop until they reach Rome, or until both the “little Satan” (Israel) and the “great Satan” (the United States) are destroyed.

Most people refuse to accept that the human heart is inherently evil. That evil is the baseline condition of all humanity. Thus so many people continue to believe obvious and increasingly apparent lies.

And thus America’s acceptance and willingness to cooperate with people who want to destroy both our way of life and our life itself.

But there is another, far more dangerous reason the White House refuses to confront radical Islam.

President Obama said the conference would build upon his strategy of “Empowering Local Partners to Prevent Violent Extremism in the United States.” Problem is that many of these local partners are the extremists. Here is how Breitbart described the Boston delegation of Muslim leaders:

One Boston Muslim leader taking part in the summit, Nicole Mossalam, has been dishonest about her controversial mosque blocking congregants from giving police information during their investigation of the Boston Marathon bombing. Another Muslim leader from Boston invited to the White House summit designed a lawsuit to stop the Boston media from reporting what it knows about the radical nature of the largest Islamic center in New England. In addition, this man, Nabeel Khudairi, persecuted moderate Muslim members of his own mosque after they tried to warn New Englanders about Islamic extremists in their midst.As we expected and warned, the Islamic Society of Boston’s (isb) Cambridge mosque—the radical Muslim Brotherhood front group attended by the Boston Marathon bombers—was invited to join the summit and is represented there by its executive director, Nicole Mossalam. A few days ago, in Breitbart News and the Washington Times, we reported how over the past decade, 12 of the isb’s worshipers have either been killed, imprisoned or declared fugitives due to their involvement in terrorist activity.

Another attendee was Salam al-Marayati. He is a 9/11 denier who says Israel is the likely suspect for the 9/11 terror attacks.

There were also representatives from the Council on American-Islamic Relations, which holds the title for being an unindicted co-conspirator in the largest illegal funding case for the terrorist group Hamas in America.

These are the supposed “moderate” partners the president is trying to empower. And they were not alone. Several other Muslims affiliated with militant groups and or Islamic radicals were also noted at the White House conference. Here are the biographies of three others.

Furthermore, many of the purported goals of the conference actually do the opposite of what the summit was supposed to be about and, if implemented, would make America less safe. The Blaze highlights “Ten Troubling Aspects of the Summit.” Here are some of the points:

So why is the president so set on working with and even empowering the very people who want to destroy America and Western civilization in general? Why won’t the president label radical Islam for the threat that it is? Why is he perpetuating fables about America’s history with Islam? Is he really that naive, or is there an agenda at work behind the scenes that most people don’t recognize?

To understand why President Obama seems to side with America’s enemies, read America Under Attack.