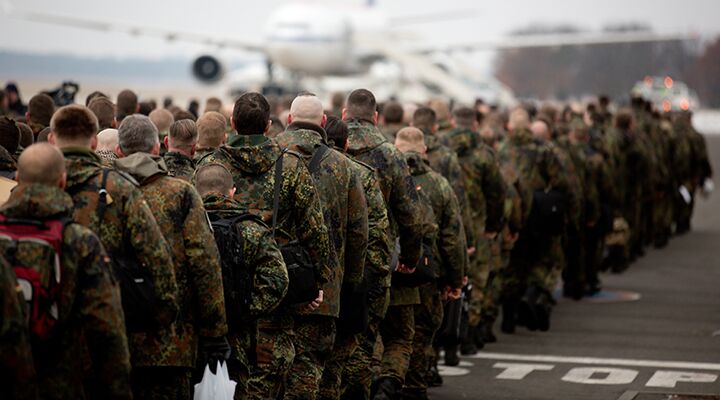 Germany removes the last restraints on its use of the armed forces, while its defense minister declares that there will be ‘no taboos.’

The year 1993 was pivotal for the German military. Germany established its armed forces in 1956, but memories of two world wars meant that they were restricted to defensive operations within nato territory.

In 1991, this slowly began to change. Thirty German soldiers deployed in Baghdad, Iraq, to help with airlift operations. The next year, 150 medics were sent with a United Nations mission to Cambodia.

The first substantial foreign mission came in 1993, with over 2,000 military personnel deploying to Somalia as UN peacekeepers. The same year, German soldiers joined in aerial operations over Yugoslavia.

The world had no problems with these operations. In fact, the UN and United States desperately wanted the German Army to do more, but to many Germans, this was too much. Germany’s main left-wing party, the Social Democratic Party (spd), and the free-market Free Democratic Party (fdp) complained to the German Constitutional Court that these deployments violated Germany’s Basic Law—its constitution.

In July 1994, the court released its final conclusion. The German military could get involved in conflicts outside of Europe, but only on two important conditions: The missions must be approved by the German parliament; and they must be part of some kind of collective security arrangement—such as the UN or nato. The argument was that the German Constitution allows the nation to take part in collective defense groups, therefore, Germany must be able to meet the commitments that go with joining such an arrangement.

Since 1994, every German military deployment has complied with these conditions. That ruling provided the legal basis that allowed the German military to aid the breakup of Yugoslavia, fight in Afghanistan, and deploy in Africa. For 20 years, Germany has not been allowed to send in its army on its own initiative—it could only do so when called upon by the UN, nato or the European Union. Until now.

The German parliament effectively dispensed with that condition on January 29, when it voted to deploy up to 100 soldiers to help train the Kurds in northern Iraq. There is no nato, UN or EU mission in Kurdistan. It’s a small beginning, but it sets an important precedent.

U.S. President Barack Obama recognized the significance of this decision. “In a significant milestone in its foreign policy, Germany has taken the important step of equipping Kurdish forces in Iraq, and Germany is preparing to lead the training mission of local forces in Erbil,” he said at a press conference following a meeting with German Chancellor Angela Merkel on February 9.

The German Defense Ministry claims the decision complies with the 1994 court ruling, but if it’s right, it stretches that ruling so far as to make it meaningless. The basis for this claim is that other nations are involved in combat operations in Iraq and that the UN has issued a resolution on the subject of Islamic terrorists in Iraq.

UN resolution 2170 (2014) does indeed discuss terrorists in Iraq, but it calls for nations to “act to suppress the flow of foreign fighters, financing and other support to Islamist extremist groups in Iraq and Syria.” It does not authorize military force, nor is it a request to set up a UN mission. If all it takes for German military action is a UN resolution on vaguely the same subject as the country in question, and a few allies, then there are no real restrictions on the use of Germany’s armed forces.

The Defense Ministry’s argument is so tenuous that the research service of the German parliament rejected it. The experts point out that the current mission is not “within the framework and according to the rules” of the UN and that the group of nations involved are not a system of collective security.

Again, if this definition is allowed to stretch this far, it seems hard to imagine what military action it would not permit. Just about every war in the history of mankind could be construed as being in defense of someone.

Swen Schulz, a member of the spd who broke with his party to vote against the deployment, reached the same conclusion. “The mandate is a further step to militarize German foreign policy,” he warned.

“The fight against [the Islamic State] has a good purpose,” he continued. “But, if the mandate goes through, a future government could justify quite different operations with a similar weak constitutional basis.”

Outside of Germany, the removal of this last restraint on German military deployments has received almost no attention. Britain and America have no interest in German military restraint—instead, like Mr. Obama, even those who have commented on this news welcome it.

Within Germany, it has been discussed more widely and, in some cases, criticized. But it is far less controversial than the last time a military taboo was broken back in 1993. This time the spd won’t be taking the case to the constitutional court—it supported it. Even the usually pacifist Greens merely abstained. The military mission was approved with 457 votes in favor, 79 against.

This broad support means that even if the court were to rule this unconstitutional, the genie would still be out of the bottle—the governing coalition has enough votes to simply change the Constitution.

Confirming the German government’s dedication to forge a new path for military, Defense Minister Ursula von der Leyen announced that her ministry was working on a new white paper for the department—a paper that would outline a future for the German Army with “no taboos.” These white papers, released every few years, set the overall policy for the German military. The last was published in 2006; this one will be released next year.

Germany’s military policy “cannot be a rigid plan of action” or “a checklist of foreign missions,” she announced. As for Germany’s international commitments, there would be “no pressure to act, but also, no taboos.”

There it is, in black and white. The last restraints imposed upon the German military after World War ii are now being shaken off.

To the world outside Germany, it’s no big deal. It’s not even covered in the English-language press.

But Germany’s history should at least cause us to pause and think about this. After all, in the grand scheme of things, World War ii is still recent history.

Yes, it seems unfair to hold the actions of an earlier generation of people over the heads of modern Germans—actions that today’s generation had no control over. Germany’s geography alone naturally gives it a dominant position within Europe, and that geography has not changed.

We assume that history does not apply today, that wars and mass bloodshed are a thing of the past. We’re sophisticated now—those things are impossible, we think.

The tv news service Tagesschau commented that we’re moving into “uncharted territory” for Germany’s Constitution. But we’re also moving into uncharted territory for modern Germany. We’ve never seen modern Germany with a military free of taboos. One could argue that we need to move into this territory and that Germany deserves another chance. But in that case, surely we should enter this new territory with eyes wide open? Instead, this new Germany is emerging, and Britain and America couldn’t care less.

The Trumpet, however, has been warning for years of what this new territory contains. To read more about this warning from history, read our free booklet Germany and the Holy Roman Empire.